We got to the bus station and were faced with the choice of an expensive songthaew or take the local bus for pittance in half an hour.

We chose the bus. This was similar to the buses in Kerala. No windows just frames and all old metal and hard leather seats. A woman told us not to pay more than 40 baht and when the collector tried to charge us 60 baht he quickly backed down at mention of the woman’s advice. (Why did we not think about this earlier!)

The destination today was The Elephant Conservation Center (TECC) situated on the highway to Chiang Mai. The plan today would involve jumping off the bus crossing the highway and then later flagging down a bus going back to Lampang.

Set up in 1992 this is one of the last places in Thailand that still offers free medical treatment for Elephants and is currently home to 50 of these beautiful creatures.

Making our way to the entrance we found the park deserted. We were guided to one of those elected buggies for our journey into Jurassic Park…. Sorry Elephant Park.

We were dropped at the ticket booth and had an hour and a half to wait until the next show. This allowed us time to explore the Elephant Hospital and Nursery.

Here we saw a really sick Elephant with a bad leg and some baby elephants playing around with their parents. One of the mama elephants was a surrogate mother for some of the children as their parents had died.

It wasn’t long until it was time for the elephant bathing. Here we met a German girl who was on a 1day Mahout Training School and was wearing the full gear. The bathing was pretty cool, plenty of elephants sloshing around the water.

From here we went up to the arena where we were introduced to some of the Elephants who then performed tasks such as pulling logs, raising a flag and beating drums. They even painted some pictures on an easel. 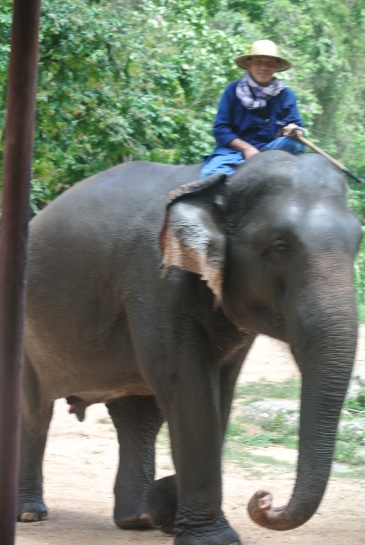 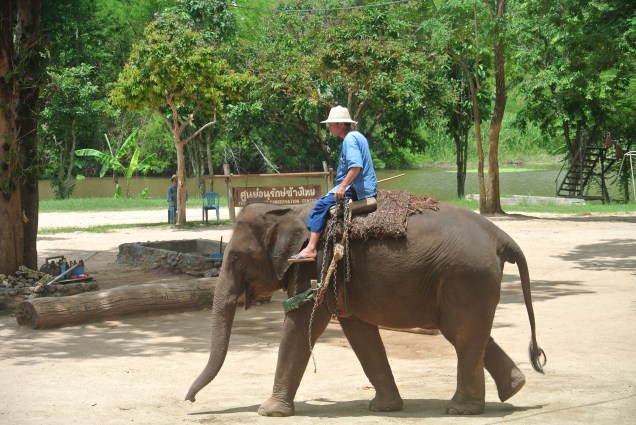 At this point two volunteers were required. The task was to collect plastic balls thrown by the trunks of the Elephants.

John threw his hand up and was picked. The following transpired… (See video sideways due to dodgy camera lady Karen 🙂 )

To thank John for volunteering he was given a bundle of sugar cane to feed the elephants. He kindly gave these to Karen who was keen to get involved. Lots of photos taken including an elephant selfie.

As we made our way to the bus stop, we spotted a sign of Faye’e Elephant Hospital. We decided to take a detour and explore. We approached the reception to ask for a tour, clearly we had disturbed the workers lunch time and we were pointed to go ahead. Unfortunately there was little open to the public to see. This was a real pity as there was a souvenir shop and visitor centre which had some elephant leg casts- both deserted. Maybe we should have visited at peak season or after lunch. Time to head for the bus.
Within 2 minutes we had a bus flagged down and got the last two seats at the back next to a monk. No ticket and the fare cash split between the driver and conductor. People smuggling Thailand style 🙂

The monk requested John’s empty water bottle, we were not sure why but obliged. Karen finished her water and offered the bottle…big mistake. The monk was very quick to reject it. Oops, cultural faux pas.

Back in town we went to a great local place for a mix of food for £2! The roasted cashew nuts were amazing. Since the sun was out we headed for the big Wat which we never made the previous day due to crazy storm. Lampange has some amazing Wats and buildings, with no tourists. We took some great photos and headed back to town for our new favourite drink a fruit smoothie. Yes Helen, John had finally found a liking for fruit! We headed back towards the guesthouse.

On the way we found a very local place where a grandmother with more eyes than teeth cooked us up the single most tasty Pad Thai we have ever eaten. Even better than the 2 girls in Bangkok.

Overall we grew to really like Lampang, it was authentic. We saw only 6 others westerns in 2 days. The buildings were amazing and all free to explore, the food was fantastic and the people friendly.

Tomorrow we would be getting the bus back to Chiang Mai.

← Wham Lampang thank you ma’am!
Back to CM →