These boots are made for walking.. 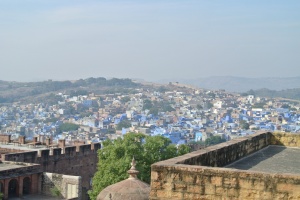 Jodhpur – The Blue City – Home of the famous Jodhpur Lancers Regiment and the vastly impressive fort of Mehrangarh. The forts battlements tower above the city of blue – so called due to the number of buildings painted using indigo.

We set off in the Jeep for a day of exploring this wonderful city and it’s prime locations. First up was the fort.

Built in the 16th century the fort dominates the cities skyline and it contains an impressive array of gates. The best of which is Loha Pol. Built at a right angle to the escarpment and lined with spikes it deterred all Elephant ramming attacks.

Inside the museum takes you all the way to the top of the fortress and contains the best selection of paintings, Elephant Howdahs and ancient weaponry in all of Rajasthan. It’s battlements are littered with artillery pieces, most of which were the booty of war. 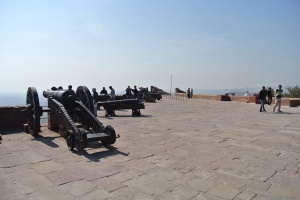 After 2 hours of exploring the guide took us down the hill slightly to the milky-white memorial to Maharaja Jaswant Singh II – Jaswant Thada. While small this was still a good place to visit and was very peaceful. The views alone were worth the admission price.

The last stop on our tour was the Umaid Bhawan Palace. A hilltop palace we had spotted in the distance all day. It is the current residence of the royal incumbent Gaj Singh II and was designed by British architect Henry Lancaster. The highlight of this was the vintage car collection , complete with some nice Rolls Royce Phantoms and a weird room full of antique clocks – a bit like the place Captain Hook kept all the clocks after his run-in with the crocodile!

We stopped by the garden cafe for a drink and it was here that I was told about the “nasty cruel religious groups” in Ireland that as soon as they see you they kill you. Obviously the GFA hadn’t reached India’s airwaves yet.

And that was Jodhpur

Next Up is Udaipur via Ranakpur Temple.

To be ConfirmedDecember 1, 2021
No current trips planned.
Join 335 other followers