Some moments stick in your head forever.

Karen and I found ourselves alone,in the dark, surrounded by noxious Sulphuric Gas – 3km down inside the crater of a volcano. We had lost our guide, and everyone else. Wretching and coughing and struggling to see from the sudden increased waves of the gas – it was very very scary. We felt like we had been transported to a harsh hellish place! 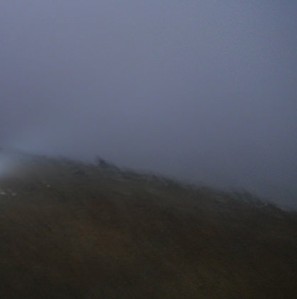 How did we get here?

The previous day we had climbed Mount Bromo. The second part of the our trip would take in the Ijen Plateau, an area of volcanic activity on the easternmost tip of java. It would be a consecutive 1am start to the day as we would be getting up to see the Ijen Blue Fire – a natural phenomenon that occurs only in the dead of night.

Unfortunately for us we had some drama (again!) the day before. Our accommodation was supposed to be in a Guest House in an Old Dutch Coffee Plantation. When we got here we were told that they were full and that we would have to do a home-stay in the nearby village. This sounded brilliant as we have really enjoyed all our home-stay visits to-date. However we soon realised that this would be different.

It wasn’t a homestay – it was someone’s house and the guestroom was in fact the only bedroom in the house! The room had been vacated promptly on our arrival at the door and the family’s bathroom was a squat toilet and manky! It was obviously the tour company trying to con us out of good money.

Normally Karen would resolve these matters, her Ayrshire accent taking on harsh tones in order to win the locals over to her point of view, but with only 4 hours sleep she wasn’t up for the fight. John, taking inspiration from his mother, conjured up a character of extreme belligerence and annoyance and eventually managed to secure better lodgings and a massive apology. 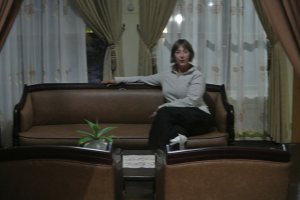 1 AM rolled around again and we found ourselves on the bus again. The short drive was to the PHKA Postal Station and, where we met our guide Sanji. We were so tired, we climbed the 90 minute walk up the mountain in autopilot. It was windy and there were spots of rain when we reached the lip of the crater. 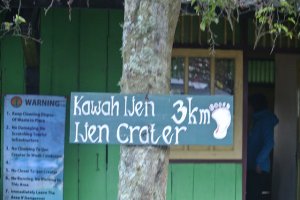 The Ijen Crater is an active volcano. We would be climbing into this active volcano. Karen was a bit apprehensive.It was 3km down the crater and this took us quite a while as there was no real pathway, just a well worn way down the rocks. As we got closer to the bottom, our guide asked us if we had any face masks. Karen and I had our basic surgical mask. The 3 Dutch girls had none, so Sanji produced 3 professional breathing masks (The kind that Bane has!). Being prepared would prove to be a big mistake.

When we got to the bottom we were in for such a surprise. The Blue Fire, is in a nutshell, the blue (vivid aqua) flame given off by the burning of Sulphur deep in the crater. Karen stayed back on the penultimate terrace while John went forward to take photographs. The three girls ran ahead, oblivious to the dangers, safe behind their powerful gas masks.

As the rain came in and got worse it exacerbated the production of Sulphuric Gas and started a panic in the crater as people scrambled to get away. The 3 girls had gone too far and the guide had to go get them. That’s when the gas attacked Karen and John and we found ourselves in position we got ourselves in.

If only we had these masks in the crater!!

Eventually Sanji found us and dragged us out of the crater. It was tough going but got back up top alive!!

Sadly it was so cloudy and misty we couldn’t see the famous lake nearby.

Sadly the smoke stopped us from seeing this..

We were also being blasted with Sulphur Gas so we didn’t hang about for sunrise, but at least we saw the flames. Not everyone that had got up so early had seen them and there were quite a few disappointed people on the way back. 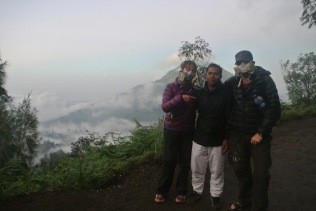 All that was left was to get the ferry to Bali. Goodbye Java and thanks for the memories.