Leaving Yogyakarta was a nightmare. 12 Hours in the back of a car, but it should not have been like this.

We had stayed in a luxury hotel as a treat. There was a travel desk that were so helpful in booking onward travel to Malang for us. This was so great because it’s tough to get around Java. So the plan was a relaxing morning at the pool before getting our lunch time train to Malang.

What happened was nothing short of disaster. Indonesians don’t seem to understand the difference between AM and PM. This was crucial, and the mix up meant we would miss our train had Karen not spotted the big mistake in time. Armed with this information we spent hours of stressful negotiation with the said hotel, we finally managed to secure a car and driver to take us to Malang, for the same price as the train. Result!!

It wasn’t. We ended up with a wee boy to drive us in the car who probably had spent less time behind the wheel than John had. He got lost at least a dozen times and if it wasn’t for Karen caching the map to Malang on her iphone we would still be in the car. It took us 12 hours in the end (On Average it takes 7 hours drive). AAAAAAAGGGGGHHHHHH!

Anyways, Malang wasn’t the destination we needed. It was a means to and end. We wanted to climb Mount Bromo, an active volcano, and needed to use Malang as a start-point. We went exploring the city. This did not take long as all the action was in the Alun Alun – central park.

This would be ok, as we had to go on a little treasure hunt to find the an open tourist office to discuss our planned itinerary for the next few days – getting to Bali via Mount Bromo and the Ijen Crater – overland.

With a few hours left in Malang this only left time to enjoy the view from the Hotel’s rooftop restaurant before an enticing 1am pickup :-(. At least we would be sharing this crazy journey with some other people, in our case 3 Dutch girls.

We were dropped in the pitch black night to a small village. This was the rendezvous with our jeep, a bright yellow jeep! Guess who got the comfy front seat (again!!) – John. Karen slummed it in the back of the jeep and felt all of the contours of the surrounding topology.

90 Minutes passed by before we were dumped onto the side of a mountain. After rubbing life back into our legs and bums (Who needs Powerplates Judit Rago!!) we walked ( in darkness) towards the viewpoint for Sunrise. We were on Gunung Penanjakan, along with everyone else*. 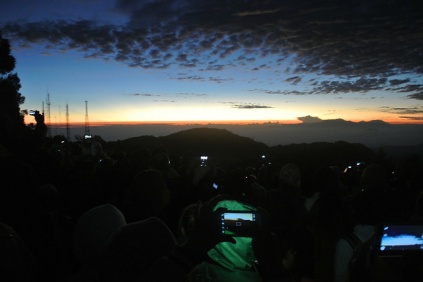 Luckily we had our own flashlights and coats as to rent them was quite the cost. Once we got to the top the roles had been well defined. John with his height advantage would take the photos, while Karen with her blocking abilities and sharp elbows would push back on all the rude European tourists jostling for position. It seemed to work out alright.

Sunrise came and illuminated the foreground providing great shots of Mount Bromo, Mount Semeru and the valley below.

Next up was the drive back down to the crater bed and it’s Sand Sea. This is an expanse of grey sand that looks like a desert – complete with maraudering horseman trying to get every tourist Rupiah. Also here is a small Hindu temple. 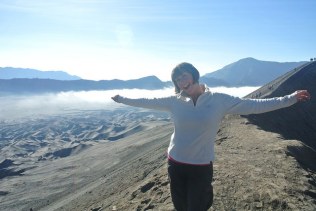 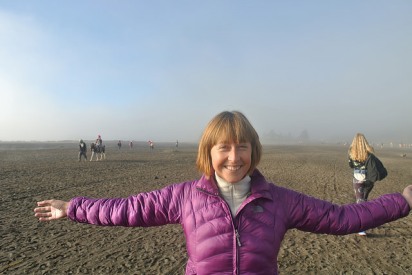 We stopped here to climb up the side of Mount Bromo and stare into it’s smoking belly. Due to the need to service the maraudering horsemen none of the jeeps will park anywhere within 2km of the volcano, so it was quite a walk.

It was actually disgusting, watching people ride horses, that were in obvious distress. Foaming at the mouth and totally out of control. Wild horses that could actually carry you away! We needed to walk carefully.

The volcano was pretty awesome and something a little different to what we had seen before. You don’t get many active volcanoes in Ireland!

On the jeep ride back down to the village there was a very rare occurence – John asleep on a moving vehicle, his head bobbing along like those plastic Churchill Dog Toys – Oh Yesss! He was awoken to partake in an amazing breakfast, in some random villagers house. It consisted of all of Karen’s favourite foods – Boiled Eggs, plain white bread and a banana. (Karen hates all of these things with an unrivalled intensity!) Thank god for picnics 🙂

Next up was a relaxing 7 hour drive to our next stop- a small coffee plantation near the Ijen Crater. Luckily for us the journey broken up by lunch. After 7 months on the road in Asia, we knew that it was eat here or nowhere at all – so we took advantage. We also knew what to order as well, something our Dutch friends were not keyed up on at all.

After lunch we were back on the bus for the last few hours drive to our next destination, but more on that in the next post!

* Sadly we had not looked at our notes beforehand. We had met a girl called Grit in Sapa, and she mentioned a less chaotic place to take in sunrise. Anybody reading this should go here –