After days of talking to several tourist companies and agonising over which trekking route to take we opted for the climb to Poonhill. 3210 meters above sea level or 3 Ben Nevis’. This was going to be a challenge for the novice Trekkers equipped with running shoes. A Sunday stroll to Blackheath was all the training they had undertaken.

Nevertheless we arrived at the trekking shop at 8.30 am armed with supplies: snickers, mars-bars, granola, toilet roll, thermals, head torches and sleeping liners. Karen had to talk John the ‘towney’ out of packing a shirt for the evening! Gunas our trusty guide was waiting for us, the 3 musketeers jumped in a taxi and headed 1 hr north of Pokhara to Nayapal.

The trek begun gently with a stroll thru local villages, 45 mins later we reached the TIMS checkpoint. After being registered to trek we were off. The initial gentle stroll had been the warm up for the peaks to come. 2 hrs of high inclines and foot bridge crossings we had reached Green view our lunch stop. A plate of Dal bhat- rice and lentils had never tasted so good. 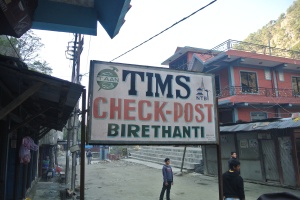 After an hour rest it was time to take this up a gear, larger inclines, many sets of steps- uneven stones. John was beginning to weary. The hill training with Greenwich runners had helped Karen keep a steady pace. However neither of them were ready for what was ahead – over 5000 Stoney, uneven windy steps to climb around 800 meters. 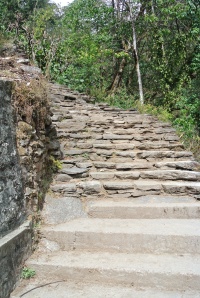 Several times Gunas was asked how far have we come? Or are we 1/2 way yet? ‘Precious’ John threw a few huffs on the way up as he insisted on stopping for a snickers breaks. 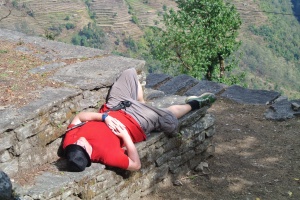 After several breaks and a nap John made it to the top along with Karen and Gunas. 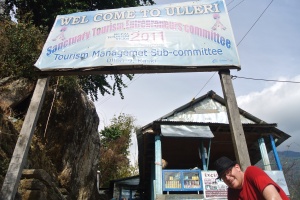 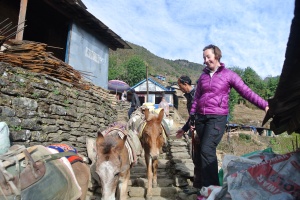 Ulleri we were very happy to reach you, next mission was to find somewhere to stay and shower! This involved even more steps, we finally reached the little tea house- hill top view. All made from wood it felt Ike a like dolls house- very basic but clean and more importantly a hot shower. It was only us and 4 Spanish girls and their guide staying there.

After 2 glasses of homemade wine ‘Roxy’ Gunas came alive, singing a Trekkers song…no woman no cry, no Dal Bhat we die, sung to the tune of the Bob Marley Classic. It was time for an early night to do it all again tomorrow. But we hit a problem… The shared bathroom had no sink…how could we brush our teeth? Over the shower or the toilet?? The practical challenges faced by a weary traveler!

Ulleri to Ghorapani was the route to tackle on Day2. Gunas assured us there were less steps-phew. After a hearty breakfast we struck out up hill and to encountered more stoney steps before reaching a forest. We walked leisurely stopped for photos at waterfalls, small bridges and various Tibetan flags. 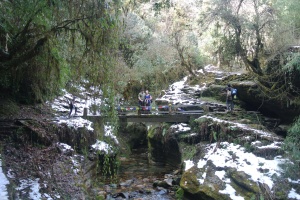 Walking in a Winter Wonderland

What a beautiful place, as we took in the surroundings we forgot about our weary legs. ‘Precious’ John was enjoying it a little more, less snicker breaks and no naps on route. We stopped for a leisurely lunch with 2 out if 4 Spanish friends, 2 of the girls had raced it to Poonhill and the guide had lost them. After lunch it was a short up hill climb to Ghorapani. 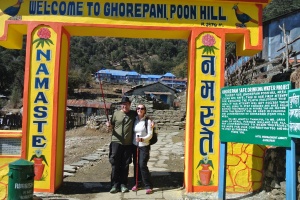 We were almost there…another few sets of Stoney steps we reached Snowland our home for the night. It was very cosy with a wood burning fire, which heated us up quickly but also the source of heat to the spring water…boiling hot shower- result.

We met Frances from Waterford, who John had met the previous night in Ulleri and Cindy from Canada and their guides. Good stories and laughs were shared by all. Another early night, we all had a 5am rise ahead of us to catch the sunrise at the top of Poon hill. 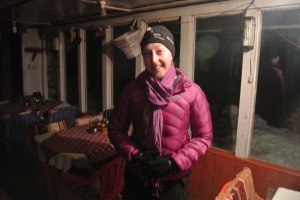 After a very cold night we woke and piled on even more clothes ready to face the final challenge the 1hr climb to Poon hill, that meant 1 thing, more stoney steps. This time they were covered in snow and ice. We were armed with our head torches (thanks Mum) and joined the lights of people making the climb. It felt like we were on some sort of pilgrimage. The cold air and sleepy state made this a tough journey. ‘Precious’ John had a mini huff and decided there was just as good a view from 80% of the way up and hill. The dynamic duo parted and Karen continued the journey to the top of Poon Hill with Gunas, she was always the competitive one. 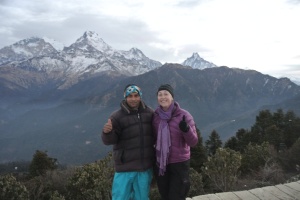 Mission Accomplished. But where is John?

At the top sipping tea and taking in the breathtaking 360 degree view as the sun began to rise, a dark figure approach up the hill panting…yes you guess it, John in his stubborn state had climbed to the top just in time to catch the sun rise. The 2 long days had been worth it, what a magical view. 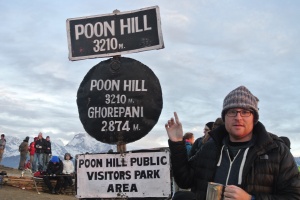 Proof John made it! 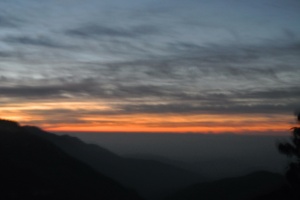 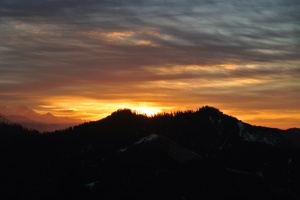 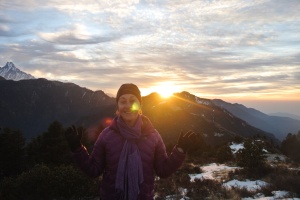 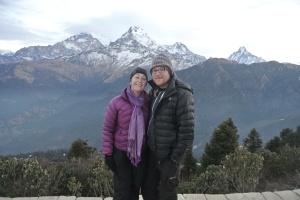 With every high comes a low… The descend had approached, Karen was dreading it. She has a terrible fear of falling. The 2 day climb was to be descended in 1. Armed with trekking poles the dynamic duo began the descend, this time John was storming ahead, scaredy cat Karen was taking her time and planning every step. While John was skipping down those Stoney steps.

Wrecked but mentally refreshed from having achieved our aim we made our way back to Pokhara and an early night that was much needed – with a cheeky room upgrade to the Everest suite, which you guess it was on the top floor. This meant more stoney steps.

Guess that leaves time for only one thing? A beer 🙂 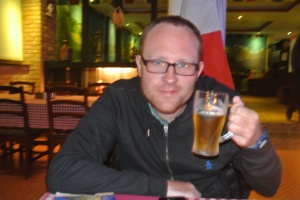 ← Gotta Catch Em All – Pokhara!!!
This town is coming like a Ghost Town →