We arrived in Udaipur at around 4pm after our long drive from Jodhpur and checked into our room in the Aashiya Haveli (right in the heart of Lal Ghat area of the city. A bohemian ghetto of handicraft shops, budget hotels and rooftop restaurants right on the lake shore.

The hotel was a converted Haveli or home and was just the ticket after our desert home stay.

Straddling the man made Pichola Lake, Udaipur is well worth the moniker “Venice of the East”. The historic capital of the Mewar Kingdom is strategically placed almost midway between Delhi and Mumbai and close to the ports of Gujarat. It is also famous in popular culture as the birthplace of the panther Bagheera in Rudyard Kipling’s The Jungle Book and the setting for the James Bond movie Octopussy as well as the Best Exotic Marigold Hotel. 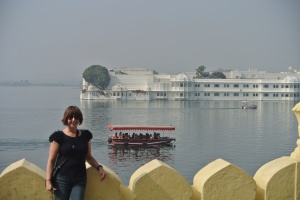 Karen in front of the Jag Mandir Lake Palace

Bags dropped and city map procured we struck out to get our bearings we quickly found that we were in a perfect location, views of the lake and palace and within walking distance of all the major sights. 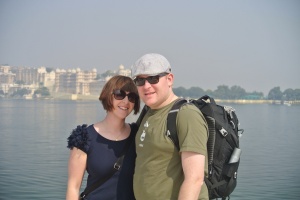 We had dinner in a restaurant called Millets of Merwar in the Hallam Ghat area, reachable by a small footbridge from our accomodation. This is a great restaurant whose mantra is “We are what we eat” – a vegan restaurant with tons of tasty gluten free options and was so good we went back the next night. 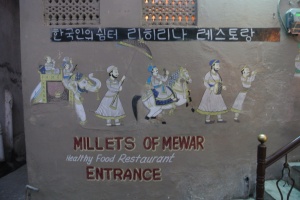 With our bellies full and our agenda planned for the next day we headed to bed, via a  rooftop bar. 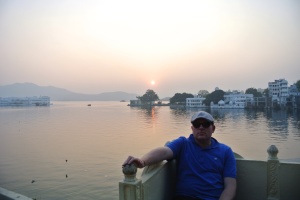 After grabbing some breakfast in the O’Zen Restaurant we headed up the hill to Badi Pol ‘Great Gate’ and the City Palace complex. We had done so many museums in short a small space of time we decided to just walk around the complex instead of heading inside. For 30 Rupees you get access to everything except the museum and this was well worth it.

There are 2 examples hunting cages just inside the Tripolia  Gates ‘Triple Arch’ so we had to grab a photo. 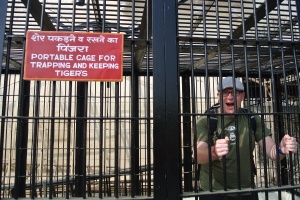 There was a changing of the Maharana Guards ceremony taking place as we arrived complete with accompanying band and Indian Bagpipe Troupe!! 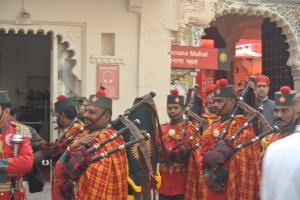 What Tartan is that? 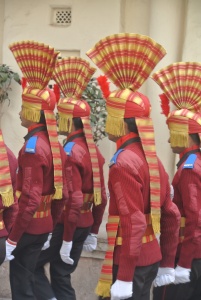 We took our time to explore the city palace complex and made our way down to the jetty where we would take the short boat ride over to Jagmandir Island. The boat took us right around the Taj Palace hotel and the Dobi Ghat washing platform next to the lake where locals wash themselves and soon enough we disembarked onto the island. 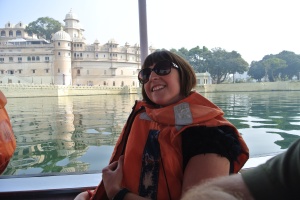 Jag Mandir or Lake Garden Palace was named after the last named Maharana Jagat Singh and was used as a Summer Palace and for hosting parties. It was also used as a refuge for European families during the 1857 Revolt. These days It is mainly a hotel/spa and tourist destination. 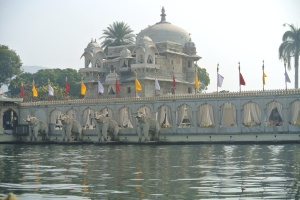 Upon our return to the lake shore we got some lunch before going to see the last big ticket item on our list for Udaipur –Bagore-ki-Haveli located at Gangori Ghat. 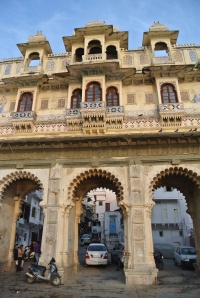 Built in the late 1700s by the Prime Minister of Mewar, Shri Amarchand Badwa, this palace has over 130 rooms with displays of costumes and modern art as well as a small puppet museum. 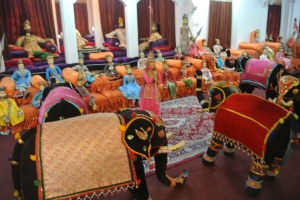 So that was Udaipur. Next up is the short flight to Mumbai for Ollie’s and Neem’s wedding. 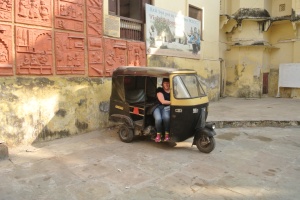 How much to Ayr?

← Ranakpur: And the Temple of Strops!!
On an All Time High →