The Hills Are Alive With the Sound of Milford…

It was a bit weird to be driving back to the airport again so soon after arriving. The only solace we had was that this flight would not be going home 🙂

Break in the clouds

We woke up that morning and no sooner had we rubbed the sleepy men from our eyes a phone call had to be made. Would we be able to fly today? Yesterday a storm front moving in quick over the Tasman Sea stopped us from taking off.

It was a Green Light for Go! We had to get our asses to the Airport. 9 months of backpacking across Asia helped us developed a knack for getting up and getting going from one location to another with all our gear intact. That muscle memory kicked in as we prepared to depart Arthurs Point and head up to Glenorchy, via our activity at the Airport that morning.

After leaving our car on a random street and dropping a pin with Whatsapp we strolled to the airport. Airport parking was too expensive!

A quick introduction and safety briefing from our pilot Ben and we were ready to jump into our plane – a GippsAero GA8 Airvan operated by Glenorchy Air We were not the only activity on the tarmac as helicopter after helicopter took off as we walked out of the aerodrome. (Bit like that ‘Voodoo Child’ scene from Black Hawk Down). 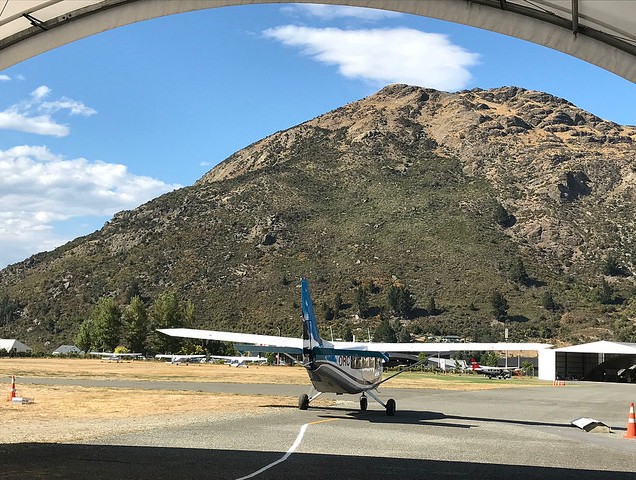 After taking off we headed north-west  past the greenstone trail at Glenorchy and the northern shore Lake Wakatipu. We then gained elevation before gliding into the Fjordland National Park only to be greeted by a landscape of peaks, mountains, valleys and ahead of us a billowing cloud front. Created in 1904 it is around twice the size of Luxembourg at almost 5,000 square kilometres and is the largest of New Zealand’s 14 national parks. 1986 saw it become a UNESCO World Heritage Site. To the north we could see Mount Aspiring, which looked immense from this vista as we flew past it.

We greeted those clouds with a slight jitter as our little plane adjusted to the air pressure and then we were flying in-between the mountains. The atmosphere was electric as we reached the Tasman Sea and did a U-turn before descending into Milford Sound itself. As we came into land we could spot waterfalls cascading down from both sides into an icy blue channel of water. 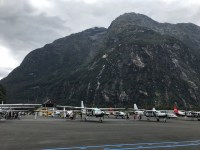 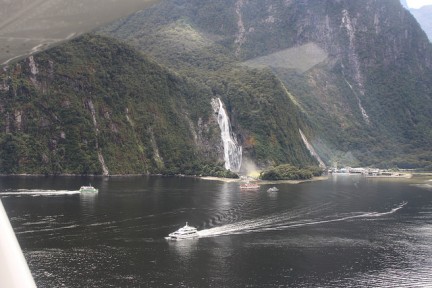 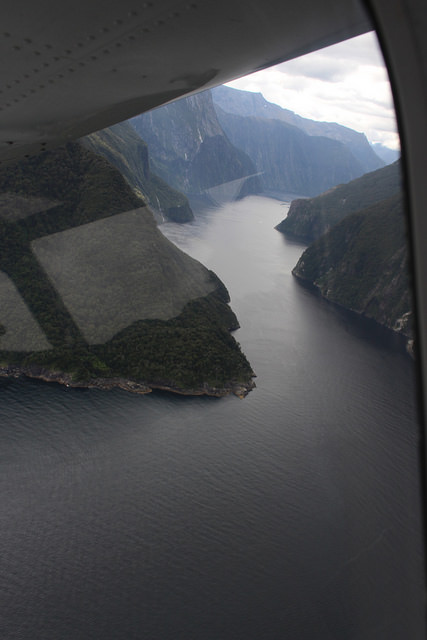 The ‘Sound’ is sandwiched to the North by Mount Pembroke, the Llawrenny Peaks to its South  and at its head is Mitre Peak. Its narrow sea entrance and large mountainsides meant that James Cook bypassed it during his voyages and Europeans did not encounter it until 1812 when Welsh Captain John Grono had a look in. Up until then it was a playground for Maori fishermen who called it Piopiotahi in honour of the legend of Maui trying to win immortality for mankind – after he died a single piopio bird flew here in mourning.

Cruising with my homie

The fjord is 16km long and the only real way to explore it is by boat. Both shores inhospitably steep to trail walkers. After jumping out of our small plane we got on a bus and were shuttled to the ferry terminal and straight onto a waiting boat. The alacrity with which this happened was not down to any operational efficiency, moreso a sheer panic that had set in since we touched down. Storms were coming in fast across the Tasman Sea and it was touch and go as to whether we would have enough time to explore the Sound and make it back to Queenstown before they hit.

There is an immense power in the landscape and when you are in the ‘Sound ‘nothing else matters as it sucks you in. One can see how someone as well traveled as Rudyard Kipling was can be blown away by it – proclaiming it to be the ‘eighth wonder of the world’. 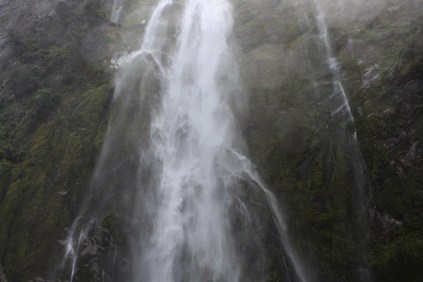 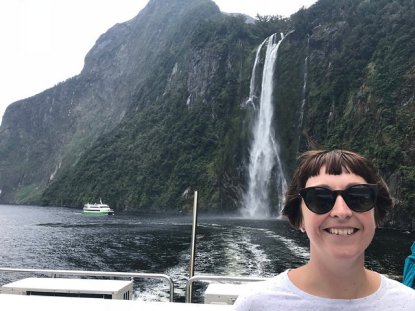 But the ‘wonder’ that Kipling describes is not limited to waterfall and mountain but extends to the locals – pods of bottlenose dolphins dance along the floor of the fjord, every so often jumping out like they are playing a frantic game of peek-a-boo. There are more than 60 living in the area. New Zealand Fur Seals lounge on the flattened shoreline rocks. Basking in the sun or relaxing after a morning hunt for food. Competing with them for fish are all manner of birds – mainly cormorants.

Our Cruise was very educational and it pointed out all the nooks and crannies and place names like The Lion, Seal Rock, Stirling Falls and Sinbads Gully.

Somewhere over the Rainbow…Way up high!

The return flight began with a straight dart out to sea, before skirting up the coast, avoiding storm clouds, before a huge right turn and back over the Southern Alps to Queenstown and sunshine!! This time we would fly all the way over Lake Wakatipu, from the North shore  and back to the airport so it gave us a great view of Queenstown form above and the Remarkable Mountain Range. We got some great overhead views of Pigeon Island,Pig Island and the Rees River delta. The cloud above us creating shadows that danced across the lake.

On the way back we managed to fly right over a rainbow. #MindBlown

Overall it was an amazing experience and we are glad we did it. The alternative 8 hour round trip by road to get to Milford Sound was too much for itinerary and…well.. Karen is not that fond of bus journeys. And we are glad she was not as we would not have had this magical morning in the clouds…

Next up is a few days based around Glenorchy and Paradise.

Who Knows at This PointSeptember 1st, 2019
No trips planned.