Lake Hayes is a body of water that is bounded between Slope Hill to the West and State Highway 6 to the East and pretty much marks the border between Queenstown and the Gibbston Valley and Wine Country. It is called ‘the most photographed lake in New Zealand” so we just had to pay it a visit.

We drove the back road to the lake, down the very steep Hunter Road, momentarily disturbing a rare White Heron that majestically flew away from us, and then shooting across the country laneways of Speargrass Flat with it’s steep bushes forming a path for us to follow. Parking was a doddle with plenty of spaces in at the Lake Hayes Pavillion and showgrounds.

Part of the Queenstown Trail runs around the lake. There was only a smattering of cloud in the sky and it made for a beautiful morning so we went walking along the up and down pathway and taking in the serene calm atmosphere of the lake (and taking photos too!). A few birds punctuated the calm every now and then – most notably some Australasian Crested Grebes that swooped down into the waters to catch fish. 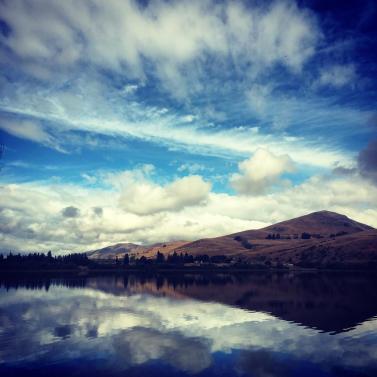 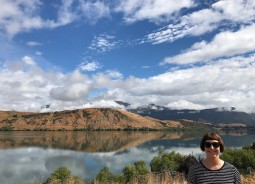 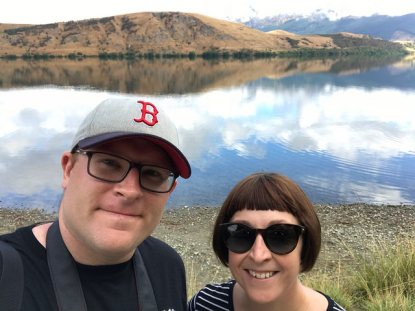 One man and his boat

While we ate our lunch of ham sandwiches and apple slices John’s phone went off in his pocket. We had a scenic flight booked that afternoon but it had to be cancelled due to bad weather over in Milford Sound. The mountain ranges out west allow two weather systems to be maintained. While it was sunny and easy here it was wet and breezy where we were going. As this was one of those chillaxed trips we had built in some contingency and we were able to re-schedule to the next morning.

With that re-booking we finished our picnic and dusted off a Plan B for the afternoon.

Window Open to the Sky

Ten minutes from downtown Queenstown is one of it’s main attractions. For over 50 years locals and tourists alike have been enjoying it and all the activities it provides. Getting there is easy enough with no real traffic jams and the route is enjoyable as you leave the urban setting. Once you get there the views are superb.

Any ideas where I am talking about?

The steepest cable car in the southern-hemisphere  takes you 450 metres above the town to the summit of Bob’s Peak. The Queenstown Skyline has operated for over 50 years since the first gondola car went up the mountain in 1967. This was 6 years after Ian Hamilton had the ambition and vision to build a road up to the vantage point. 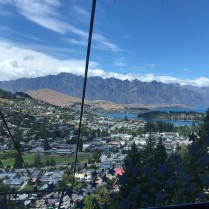 Great view of the Remarkables

One of us is nervious, can you guess which one? 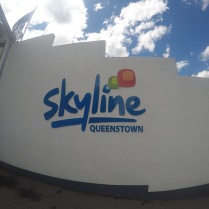 When you get to the top the views are stunning. Taking in the town below, the Remarkable Mountain Range, Coronet Peak and the waters of Lake Wakatipu tying it all together. Being this high up casts a spell of silence on the whole region that is only punctuated every so often by the screams of an adrenaline junkee from the nearby Ledge Bungee Jump. 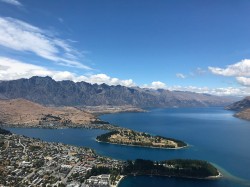 Queenstown and the Remarkables

Everywhere the light touches is yours Karen…

Recreation of the earlier Gondola Ride

There are so many activities up at the top, an 800m luge run, a Jelly Belly Store  complete with some interesting mosaics and a whole number of walking routes. 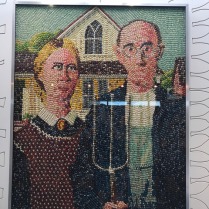 Frodo and The One True Jelly Bean!

All the World is Yours

We spent all afternoon exploring a few of the trails starting with the Hammy Track  on through to the Ben Lomond Trail. The Trail starts off in a forest of exotic Douglas Fir before opening up to reveal more amazing views of the lake below and of Ben Lomond Peak.  Another link to home as the peak was named to honour the other Ben Lomond back in the Scottish Highlands. 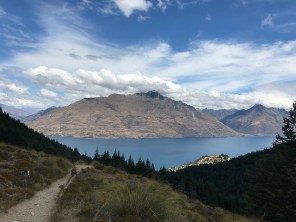 The view moves west from this point

The Road Goes Ever On

Some of the many tracks

That evening we had a great dinner at Ivy & Lola’s . The occassion was a long overdue catch up between Karen and her (Irish) cousin Sarah who lives in Queenstown with her soon-to-be husband Gerry (from Glasgow). The same Irish-Scottish connection but reversed. We spent dinner talking about travel, living in Sydney and Queenstown and the quirks and funny side of being ‘Celts Abroad’. It was a really great catch-up that got even better when Gerry suggested we go to Mrs Ferg Gelataria for some ice-cream. (The Fergs had branched out from Burgers!)

As the last of John’s Salted Caramel was devoured, Gerry mentioned that we should go and do ‘Zombies!’ When pressed on what ‘doing Zombies!’ actually meant we were greeted with a Cheshire grin and a “we will find out soon enough” response.

As it turns out… Zombies! was a Motion Madness adventure where you are strapped into a chair and are immersed in a Rail Gun Shooter game. Similar to House of the Living Dead on the Sega. We spent about 20 minutes shooting up Zombies, mutated spiders and reloading our guns when prompted (“Reload! Reload!”

When the dust settled – Gerry turned out to be the winner. But then again we got the impression he was after  a lot of practice 🙂 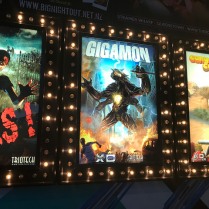 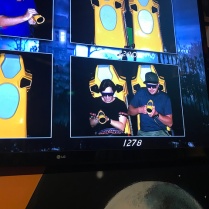 Karen concentrating on taking down those Zombies!

A great way to end an amazing day with a lot of steps trod on the ground and in the mountains. Tomorrow we would (hopefully) soar above all of this and check out Milford Sound to the East.

← Gold Rush
The Hills Are Alive With the Sound of Milford… →