Located at the head of the Dart and Rees Rivers and nestled on the north shore of Lake Wakatipu is a small settlement named after a Scottish landmark in Argyll. It is one of the last stops before entering the Mount Aspiring National Park and acts as quartermaster for legions of hungry trampers about to take one one of the nearby trails be they Routeburn or Greenstone.

The drive up was very scenic with the road keeping parallel with the lake all the way up. We stopped at Closeburn (10 mins out of Queenstown) to take some photos before stopping again when the terrain changed at Bennetts Bluff Lookout. It was so windy we could barely open and close the car doors but we got great views across to the North and West.

Glenorchy started as a farmstead with 3 shepherds and a large mob of sheep settling in the area to graze Ree’s lease. William Rees had taken on a lease of all land at the head of the Lake. The Gold Rush of the 1860s meant that a ‘town’ was formed and 3000 miners spent their days panning in the nearby streams of the Dart and Rees Rivers. This led to a number of Sawmills to spring up and milling was a major industry until the 1950s. The other major industry once the prospectors had moved on was tourism. Steamships from Queenstown would bring day-trippers, artists and photographers up the lake from Queenstown and this led to a number of hotels being set-up in the town. The Steamships days (including the TSS Earnslaw) were numbered in the 1960s after the Road to Queenstown was built.

We stayed in the Glenorchy Lake House right next to the lake and the Trading Post. As it was Karen’s birthday I decided that we would go out for dinner at Kinloch Lodge, which was 17 miles by car. However we we had another transport option available. Collection was by John Glover, the owner of the lodge. in his skiff. 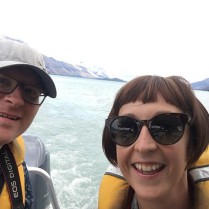 He had owned it for over 18 years but it’s past was long and interesting. Setup in 1868 by Englishman Captain Richard Bryant who moved into the area during the Gold Rush. A former Royal Navy Captain his love of the waters continued in his later career as a member of the Dunedin Water Police and the first harbour master for Lake Wakatipu. He started the lodge as a tavern for the nearby sawmills before turning it into The Glacier Hotel as visitors increased. Between bush fires, the marching tide of change, road openings the lodge’s fortunes ebbed and flowed like the tides of the lake it was next to. Today it’s a heritage lodge and restaurant, big enough to cater for the trampers and explorers that come to visit but small enough to have a bit of its character of yesteryear.

We enjoyed a great dinner with a view that night, and since it was her birthday, Karen was allowed to have her own dessert and not have to share it! 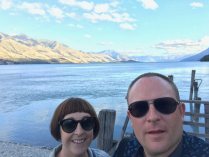 The next day we went for a walk exploring Glenorchy Lagoon (which was just past the Golf Club). A series of wooden walking platforms to walk around the lagoon and wetlands with some impressive verandas, wildlife and one or two very narrow crossings. At one point John was almost in the drink due to an overzealous cyclist. But we tempered that by meeting a very friendly doggy or two. Every so often there are benches and we spent a bit of time just sitting and gazing out across the wetlands to Mt Earnslaw/Pikirakatahi and the surrounding mountain ranges. 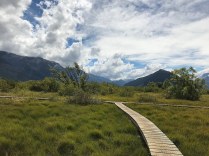 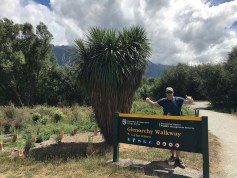 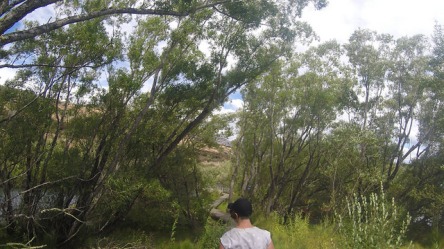 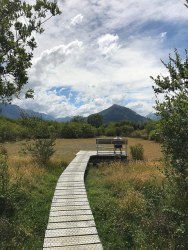 We drove out to the Routeburn Track the next morning. The first couple of kilometres was on a tarmac road but as soon as we had crossed the Dart River Delta we hit gravel roads. Not so forgiving on the Toyota Corolla!

One of the 9 Great Walks in New Zealand. The total track stretches 32km and is described as the “ultimate alpine adventure”. You start at the bottom of this mountain walk through a strand of majestic Red Beech and Mountain Beech Trees. This is due to the environment being different to that of Milford Sound with less rain falling here. Before long  the terrain changes and you make your way up to the Routeburn Flats Hut. Swing Rope Bridges take you across Sugarloaf Stream and a number of waterfalls such as the Bridal Veil Falls as you cross over the Routeburn Gorge and its river. 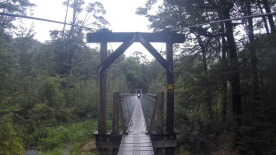 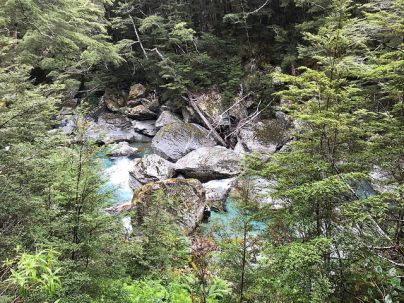 The last bit opens up all of a sudden to vast grassy flats as the first plateau is reached. We stopped and had a small bite to eat at the Routeburn Flats Hut as the rain came pounding in. We would spend another 40 minutes heading to the Routeburn Falls, uphill against sludge and loose rocks  before having to turn back as the deluge of rain was starting to turn our route to  an unstable mire and visibility was near zero. The nearby Humboldt Mountain could barely be seen when the mist had fully moved in. It was very Silent Hill-esque. 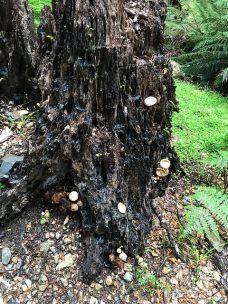 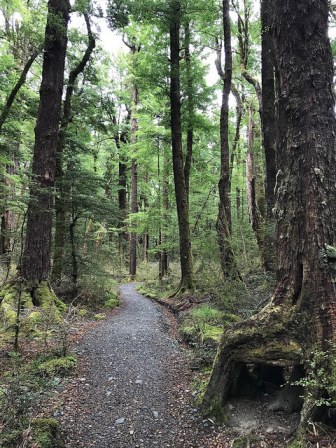 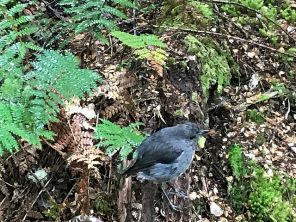 But we were not totally beaten. We still had a few hours of tramping in front of us to get back to the car and for  the time we spent on the Routeburn Track it was well worth it. Tons of different tree species, wild mushrooms everywhere and numerous bird species. We would need to come back with some serious kit if we were to give the full 5 Day  Hike a good go.

By the time we reached the car we had registered  40,000 steps on the Garmin Watch and about 100 floors of activity. Yikes!

In our next post we talk about how we got “Lost In Paradise” and what Glenorchy Nightlife is all about.