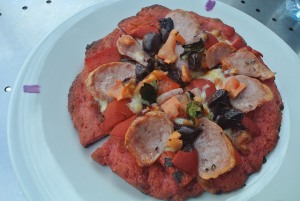 Our penultimate stop for a wee while would be a little place in the state of Victoria. You may have heard of it before? It is called Melbourne.

Located at the head of Port Philip Bay, Melbourne is Australia’s second largest city (behind their arch-nemesis Sydney!)

With miles and miles of amazing Victorian-era architecture, an entire district devoted to hipster and vintage culture (and Street Art) in Fitzroy and the home of Australian sport – it’s no wonder that Melbourne is consistently voted one of the top places to live in the world. And we haven’t even mentioned the food yet. But we will now…

And what better place to start talking about food then Queen Victoria Market.

‘Queen Vic’ has been the beating heart and gourmet soul of Melbourne for over a century. This historic landmark is spread over two city blocks and literally ‘everything and anything a cart can unload’ is sold in one of the many stalls here.

Visits to the market became a daily staple of Karen’s last visit to Melbourne in 2006 and this time was no different with Gluten Free Rice Pizzas keeping us coming back for more. That and the free samples of cheese and meats. (JOHN: At one point I thought Karen would try on my glasses to get another sample!).

The Butchers section was full of booming voices uttering such proclamations as “Get your Rump Steak here” , “Lovely Juicy Burgers” , “Who will buy this wonderful t-bone!”. Not like the shop back in Ayr. 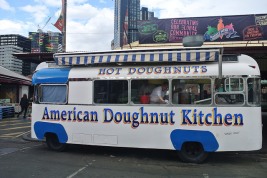 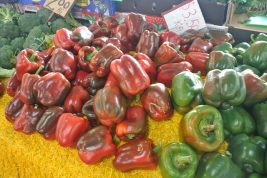 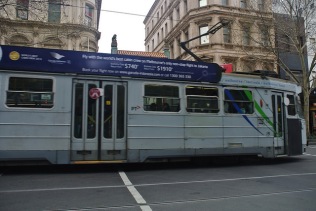 But it’s not just good food on offer here, but history. Apparently the market is built on top of an old cemetery and there are reports of the ghost of an Australian soldier who can be seen from time to time.

After our trips to the market we explore the nearby areas. Melbourne’s incarnation of Chinatown (located around Little Bourke Street) has been in business since 1851, making it the longest running Chinatown in the Western World. The district is demarcated by 5 arches and is chock full of restaurants and shops.

Straddling Chinatown to the north is Little Greece. You would be surprised to know that there are more Greeks in Melbourne than any other city in the world (outside of Greece) and this has led to the cities twinning with Thessalonika as well as a bulging book of trade between the two countries. Here there are a lot of Greek motifs on benches, bus stops and all the Greek restaurants you could wish for. There is also a constant smell of Tzatziki, Taramasalata, Souvlaki and all those other great Greek foods!.

← West Is Best: Highlights of Western Australia
The Writings On The Wall →