So we had left the tour. (luckily we had around 8 months of getting to used to our own company to not let that affect us).

Task 1 was to secure lodgings for the next night. The day before Tom mentioned that we should stay in Pot Shots, another establishment down the road. We called in and booked a standard room in the YHA Hostel, although we were  not able to see the room at that time.

So the next morning we arrived with our bags and checked in, but a tingling in the fingers told us not to book all 3 nights there – a premonition that we would not be here that long!

So we arrived at the room. Both inside and out made it look like something from a Horror Movie – the Hostel or Wolf Creek. The cells in Fremantle Prison were in better condition. On this occasion, backpack still on her back, Karen declared…

We are not in the back of beyonds in Asia anymore! This is Australia – we don’t have to put up with this shit!

Within 2 minutes Karen had accepted a full refund and declined to provide constructive feedback on her reason for flight.

Dilemma! So we went to the library to use the computer and plan a new strategy for the next few days. The library was run by a girl from Wicklow surprise surprise. Half an hour later we had booked back into where we had stayed on tour – no where else was a good match. Had a lead on Car Hire and had come up with an agenda for the next few days.

The place we were staying had a full BBQ set and we knew what it was like. The only problem we had was that we left our plates and had no utensils for the cooking facilities at the accommodation – as nothing is provided. So for the next 3 nights we begged, borrowed and stole everything we could to cook some dinners. BBQ cooked potatoes are good.

Without our fellow tour guides we thought it would be a bit lonely. We shouldn’t have worried, our new neighbour was a women called Pauline who we are 100% convinced was straight out of Prison! Her mannerisms and scrubs like outfit made her a pariah amongst all the guests! We kept our distance but she still caught our eye!

So that was the digs sorted. Now we needed to fill our days with some good ol’ sightseeing. To get around up here you need a set of wheels. With over 10 years worth of safe driving in all conditions Karen was confident to only put herself on the insurance, driving, in her words, was ‘easy peasy’! But that was in a Manual car.

Our Nissan Micra was an Automatic. Within 2 minutes Karen was stressed out big style and had a huge meltdown as she couldn’t summit the mental peak that is ‘driving an automatic’. With only 150km worth of driving allowance each day there was no time (or mileage) for a crash course driving around the car park #Drama!.

So it was back to the Cape Range National Park, and we drove down to Sandy Beach. Not just a clever name, this stretch of beach was magnificent. And totally deserted, the sun was beating down and the water was so inviting.

After browning ourselves at the beach and finishing off our picnic we headed down to Yardie Creek, a natural gorge at the bottom of the park. We witnessed other people kayaking up the creek, salmon jumping out of the river, and as we were walking back to the car we were almost jumped on by a small kangaroo – a very close encounter.

The next day we spent some time at the pool back at the accommodation, before we drove back to Turquoise Bay as we really enjoyed it from the tour. On the way we were lucky that Karen was being cautious as a Kangaroo burst forth from the side of the road and hopped across the road 10 metres in front of us. The water at Turquoise Bay was a lot calmer so we managed to see a lot more fish near the beach. Here we met a photographer from New Zealand who was dead chatty and took some photos of us. We also saw whales breaching the water in the distance (and saved ourselves the potential $150 Whale Watching fee at the same time) On the way back we saw a few more kangaroos and managed to get the camera on them this time. 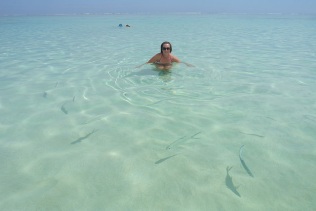 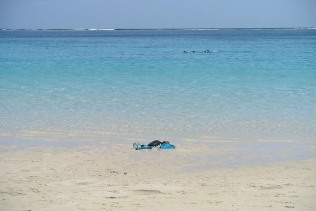 We had booked a flight back to Perth and the only thing to note was both the tiny size of the airport and the fact that everyone was glued to the TV to see the Dockers game in the play-offs, including two grannies who were downing Midis of beer and shouting very loudly.

We made it back to Fremantle and back to our pal Eilidh’s house, and were warmly welcomed by Baxter (the dog!).