After over a week of lazing on the beach it was time to return to the mainland, well a larger, busier island, than the Gilis. We had heard good things about Lombok so we were raring to go!

To get to Lombok we took the “Local” boat to Bangsal Harbour, in the North of Lombok. This involved trying to climb onto a wooden, moving, boat while the locals scrambled on around you. In Indonesia, the boats back into the beach, and instead of filling the front of the boat, i.e the vast emptiness furthest from the on boarding point, they congregate around the back of the boat, surrounded in shopping bags and boxes. Seriously what is in those bags?

Karen got on and dumped her rucksack on a small box, much to the chagrin of one of the local women. While this was going on John smashed his head against the top of the boat and had to dodge outreaching feet to get into the boat. All the time there was no help from the locals. 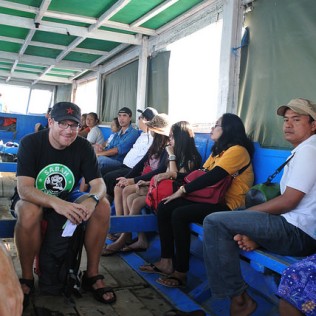 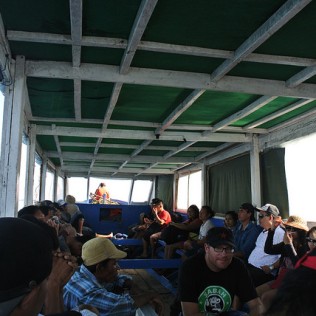 The boat was packed but we got there. On embarkation, one of Karen’s flip flops went missing , it had fallen off her bag. The cheeky driver found it and then asked to be ‘paid’ to return it. If ever someone deserved a ‘Glasgow Kiss’ it was this man. But luckily for us, Karen declined the invite to teach him some manners.

It wasn’t long before we managed to secure a lift to Senggigi. Located on the west coast, it is famed for its beaches and is very popular to visit in Lombok. We chose this place first as it was nearby a school that we wanted to do some volunteering in.

The drive down wound round many bays and the continuous sight of waves crashing up on palm-tree lined beaches got us really excited for the next few days, but what we discovered was something a bit different.

We got a room in the Central Inn, which describes itself a “Backpackers, Homestay, Hostel, Hotel, B&B, Guesthouse, Resort”!! Just like Joseph, it was a coat of many colours! Once checked in we struck out for the day. 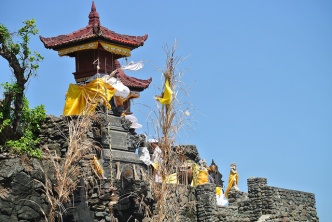 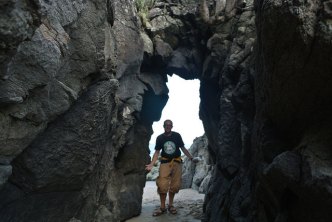 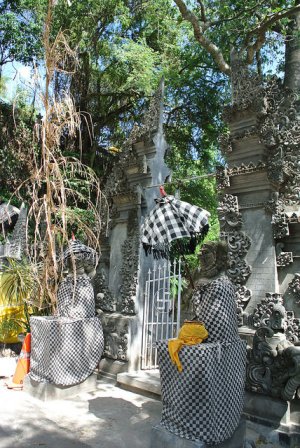 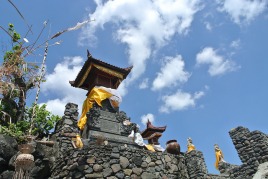 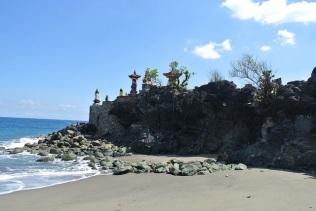 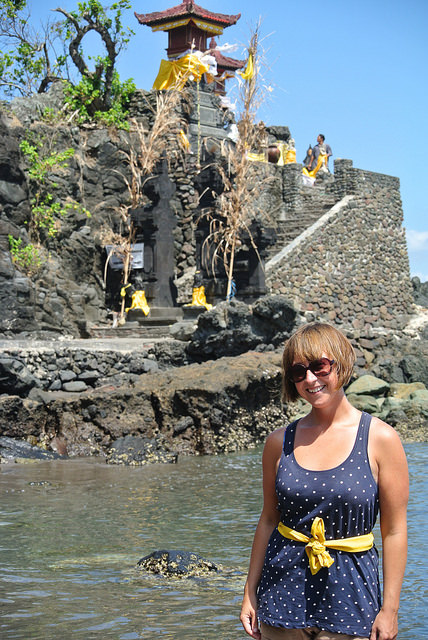 Senggigi does have good beaches, but after you take away all of the stretches that have been usurped by 5 Star Hotels, used for parking for boats and are not being battered by 10m high waves all the time there is little beach left. But onwards and upwards and we made the most of it.

About 20 minutes walk north finally bore fruit in the form of the Pura Batu Bolong. This Hindu temple is located on a rocky volcanic outcropping from the black sand beach. Here we managed to meet a nice English-Indonesian family from Manchester that were also visiting. The Temple was small but being right on the sea it looked amazing.

Bad news struck that evening. The school was closed for Ied Mubarak, and we would be unable to volunteer and teach English here 😦

The other beach we went to see was up in Mangsit. This was meant to be a great beach but it had been single-handedly destroyed by the building of a large luxury hotel, limiting the beach front to a few metres. As we sat on the steps down to the beach, contemplating our ill fortune we were viciously assaulted by the high tide and if not for Karen’s lightning reflexes it would have consumed our camera! 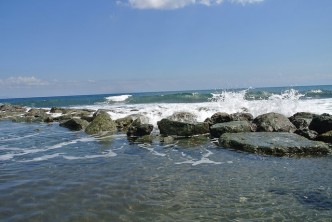 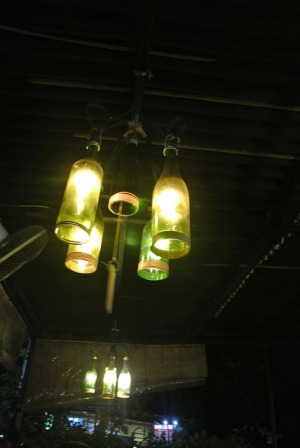 Dejected we went back into town. But in the face of such adversity there is always hope. This came in the form of some of the best food in Indonesia. We found two Warungs that sold cracking food. Brilliant Tuna Steaks, Chicken Satay, Palm Sugar Pancakes. Amazing places. The best one was called Warung Botol – this is a must if you pass through here!

As the weekend approached we had a dilemma. Kuta beach, our original next destination, had no accommodation available to book online. Normally this is not a problem, but as it is spread out and with ‘ghoulish’ updates from our friends Angela and Able that there had been attacks on tourists we decided to not risk it. We had also heard enough stories from other Indonesians to be apprehensive too.

Senggigi was a shame. Discussing it weeks later we feel that the abundance of fancy high-walled remote resort hotels has slowly killed the town. Backpackers would do well to skip through here (in our opinion!)

If anyone that is reading this blog is going to Senggigi and has the time to spare, the school/charity we tried to be involved with was