Better the Gili you know!!

So in Lombok. We could get a long boat back to Bali or we could do something we had been curious about since we arrived in Indonesia.

Gili Trawangan has a pure party label. Some people say it is the ‘Zante’ of Indonesia. Full of young, predominantly Australian 20 Year Olds throwing all caution to the wind.

But is there another side to this misunderstood island. A chance conversation in Safari Bar in Gili Air made us think there was.

So back to Bangsal and another public boat to the final member of the not-so-holy Trinity, Gili Trawangan.

With no accommodation booked we had to go house to house. After an hour of searching we found the last room in a place called Beautiful Life, right in the middle of the strip. Not the best place but we took it for the night until something better came up.

The room was nice but it was slap bang in the middle of Happy Hours, Rave Music, scantily clad sunburnt surfers. It was also pretty unsafe as all the horse carts racing around made you feel like you had wandered onto the Circus Maximus track. There must be more to this island than this?

15 minutes walk north and out of the strip is a stretch of beach that is sparsely built upon. We managed to find another bungalow here and planned to move the next morning.

We spent the rest of the day on this cool beach and got to work on our tans.

The next morning we checked in to our new place, not realising that it had no A/C and the fan that was used in lieu was no wind tunnel! But it was on the cool beach so we went with it.

Such a great decision. We had such a great choice of beach chill out spots and some good Western food at both Wilson’s Retreat and it’s neighbour Karma Kayak.

The only activity we did was to walk over to the west side of Gili Trawangan. Great stretches of desolate beach interspersed with fancy resorts and the odd gem like the one we had a drink at. A shack of a bar run by a Serbian guy with commanding views of the sea and Bali in the distance.

There would be no temples or markets to explore here but it was a little piece of heaven for a few days.

But like everything, heaven had to be put on hold. Another transit day beckoned. To get to Yogyakarta we would have to get a Boat, Bus, Flight and Taxi via an overnight stay in the classy spot that is Legian. 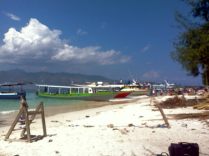 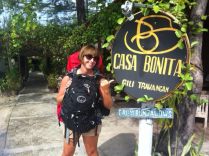 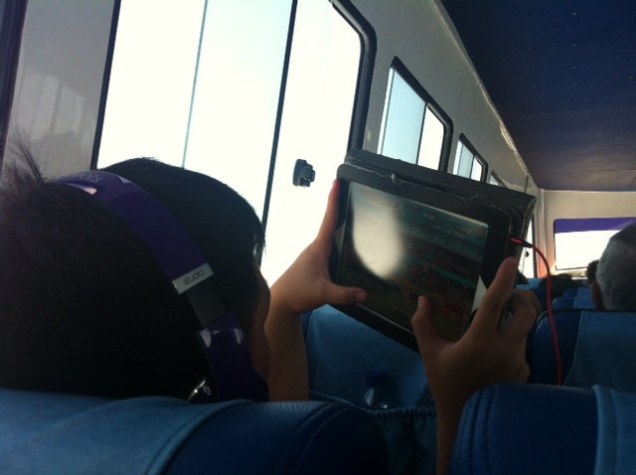 The boat to Bali had a few events, not least how we were ‘dropped off’ to the jetty. We arrived as agreed at 10am before the wee boy jumped on his bike and sped down to the Harbour (2km away) to buy our tickets. Meanwhile we trundled along after him trying to keep up, laden with all our bags. We arrived only to be told the boat was not until midday.. here we go again!!

← Sengiggi-giggity
Nothing rhymes with Yogyakarta! →