Faster Than A Speeding Bullet!

Not exactly the Bullet Trains that link Osaka and Tokyo (Thanks for that one Raul Julia) but really fast nonetheless. Ladies and Gentlemen I give you the Maglev Trains of China.

The stations were state of the art. Looking more like airport terminals than their national railway counterparts. They had bars and restaurants, newsagents and more seating areas than passengers.

The trains are clean and spacious, an army of train attendants in flashy uniforms and with all the seats facing the destination it felt very ‘Philip K. Dick’ futuristic.

Each cabin had a speedometer and like a little kid John gave a smile ever time we hit over 300km an hour speed. I think in the end we topped out at 308km/h. To give you an idea of the speed, that’s nearly the top road speed of a Porsche 911 Carrera. 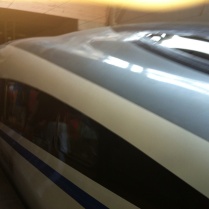 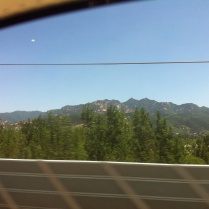 All the seats switch round automatically with a little push of a button for the return leg. Simply Mind-Bottling!