This one is a bit wordy so put the kettle on and if reading at work – block out your calendar for the next hour. We arrived at our courtyard guesthouse deep in one of the renowned hutongs (alleyways) in Beijing. It was too late to really enjoy one of the pay-for sights so to enjoy the last few hours of sun and see something we got on the Beijing MTR and headed straight to probably the most famous square in China – Tiannaman Square (T-Square) 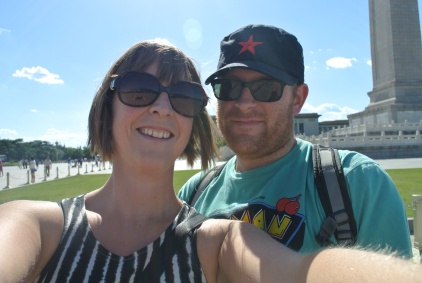 To say that it was huge is a severe crime, it is gargantuan. For the boffins it is 440,000 square metres. Similar to the National Mall in Washington DC, Red Square in Moscow and Renaldo’s Ice Cream Shop in Ayr, T-Square is considered the symbolic centre of the universe for the citizens of the People’s Republic of China.

We got out of the MTR station on the south edge of the square. The security setup is somewhere between a festival and an airport to gain entry and the whole place is under the careful watch of police and army. Once inside the camera was working overtime.

To the south you have the Qián Mén, Front Gate, which consists of two gates. With the old city walls destroyed they look out of place, like Packie Bonner without gloves on and not between the posts. Another casualty of China’s rapid progress. They are both 40 metres high and have been reconstructed after partial destruction during the Boxer Rebellion.

Sitting to the side between them is the British built Old Train Station that is now a railway museum. We would have visited it but we suddenly realised that life is too short. The square itself is flanked on both sides by vast marble constructions that rival the Smithsonian Museum in Washington DC for their facadual grandeur. (I don’t know if facadual is a word ?). To the east is the Great Hall of the People where the mandarins and officials plot the future course of the Chinese People, complete with a banquet room for 5000 people.

In China you go big or you go home! To the west is the China National Museum another Soviet-era construction. The square itself is flatter than a pancake and the paving stones are kept spotless by a discreet force of mobile cleaners that whizz past you on silent scooters. 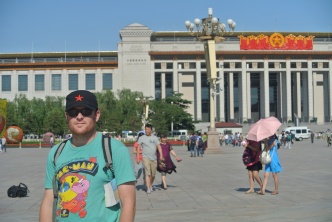 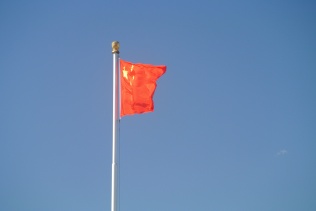 Inside the square you have the Chairman Mao Memorial Hall. Similar to Ho Chi Minh’s Mausoleum in Hanoi, the big man himself lies in frozen carbonate, sorry that should be in a crystal cabinet draped in red flag. You also have the Monument to the People’s Heroes in the centre of the square. To the North of the square and marking the entrance to the Forbidden City is the iconic Gate of Heavenly Peace.

This vast red coloured wall is dominated by a portrait of Chairman Mao. It was on this wall that he declared the People’s Republic of China in 1949 and it completely spans the north side of T-Square. Apart from all this the square has no seating whatsoever and when the sun is out the Chinese scramble for the shadows, that the few features it does have, creates. South of all this are the streets of Qianmen Dajie. These are all paving stones and purpose built granite buildings.

Here we found some dumplings in a famous shop that was established in the 17th Century. Outside the Main Street are alleyways where people dressed in traditional garb shout via microphones. Their message – come in to my restaurant to try some of my Peking duck! We had a lead on a good place from Diarmuid Bowe so we politely declined. 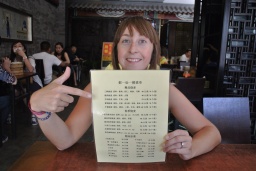 This initial sightseeing appetiser of Beijing was really good and we cannot wait to get stuck into some of the main courses (Forbidden City, Great Walls etc) over the next few days. Oh and if you were wondering how we could visit here given the events of 25 years past then don’t worry. We staged our own mini- protest while here. 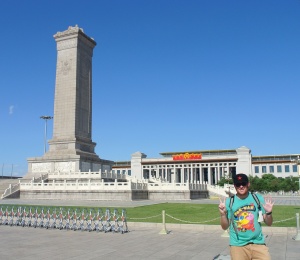