Ever do 80mph in a TukTuk on dark streets before?

As of now we have.

We reached the airport in no time which was nice but it was too early as the Laissez-fAIR ASIA ground staff only opened the gates 10 minutes before they would close!

It was to be our first introduction to the Chinese queue system.

The airport was pants. We couldn’t even buy water as everything was closed.

Boarding the plane we never realised that in less than 6 hours yet another Military Coup would descend on the former Kingdom of Siam. We had got out in time!

The flight to Hong Kong took 2 hours and soon enough we were handing over wads of cash for our new prized possession – a 30 day Chinese Visa.

With that done we made our way to Mongkok area of Kowloon via bus. There is no change given on the bus so we ended up paying 2.5 fares but hey ho!

Arriving in downpour we jumped into a coffee shop and made contact with our new landlord Tong. We opted for AirBnB this time. We were told to meet him at the underground exit and he would be wearing a pink t-shirt. Sounds very cloak and dagger but more exiting than collecting the key somewhere!

The flat was perfect. Good bathroom and fridge with a huuuuge smart tv. Our landlord Tong was so excited showing off its features that he forgot to give us his key until his girlfriend Tu prompted him. 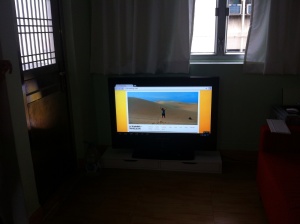 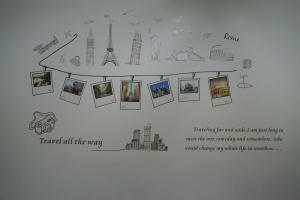 The cute wall in our new ‘home’

The building was very local and was guarded by an old Chinese man.

That evening we would meet our pal Judit. She was on her way to Australia and passing through Hong Kong at the same time as us. Karen was super excited to meet Judit, a friendly Greenwich face. Someone she could have a good girly chat to. We had talked about the potential meeting back in London. Judit had always talked about a visit to Oz, Richard had finally convinced her…our rendezvous was the deal clincher!

Before meeting Judit we went to the supermarket and bought Octopus Cards – for travel on the MTR. We then took a bus down one of Kowloon’s busiest arteries – Nathan Road to meet Judit.

She was staying at the Mira hotel with her boyfriend Richard and his friend John. This was the same hotel where Edward Snowden spilled the beans on US Govt hacking to the Guardian Newspaper.

After a few drinks and a catchup 5 became 7 when we met two of their friends for dinner nearby. A selection of food was spearheaded by a whole roast duck…yum!

We got some good pointers from the locals for where to go in Hong Kong including a hike up Victoria peak. Furthermore we got a good connection of a local in Beijing who was keen to show us the city.

When we got back to the apartment that night we had a new addition to our food stores – a massive bar of Cadburys Wholenut chocolate thanks to Richard and Judit 🙂 UK chocolate is definitely the best.