First they took my molar…

For the last 5 weeks John’s tooth has been lose. He knew he needed to get it seen to but he wanted to wait for the right place. Our friend Charya goes to a clinic that is staffed with foreign trained dentists so we got her to book an appointment for John there.

It was probably the most impressive looking surgery we have ever seen. Clean isn’t the word. White walls and floors that you walk on with white Crocs.

After registering John was brought down to the surgery. Karen settled in on the comfy chairs in reception with free wifi!

After nearly 2 hours John re-emerged, sans 1 tooth. From now on a part of him will always be in Cambodia.

We are going to need a bigger Tooth Fairy!

With his numb jaw and regimen of painkillers we decided to just take it easy and do some easier activities. First up was the National Museum. This was small but had a lot of the original statues and bas-reliefs from the Angkor Wat temples kept for safe keeping. 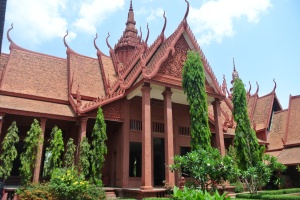 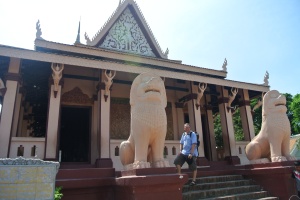 After that Karen enlisted with the Royal Palace guards.

Then we got a message about the Chatomuk short film festival and that it would be showing free movies in a nearby mall. So off we went, via the outdoor gym on the Riverfront. 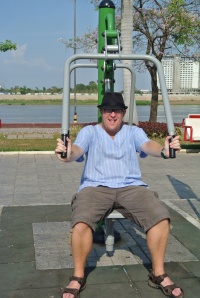 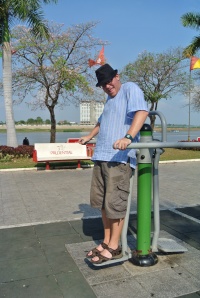 We had an hour to wait beforehand so Karen went to get a pedicure while John browsed the shops before heading up to the cinema. 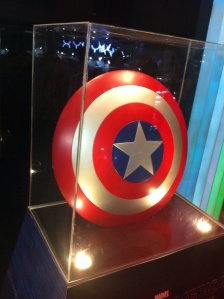 Subtle reminder that Captain America 2 is due to be released!

The films we saw were mostly international with a really good one from the UK called ‘Close’ (Geoffrey Taylor).

The next day we went to the Central Market in order to pick up some stuff. John needed some new T-Shirts and we needed some extra combi-locks for Vietnam.

Opened in 1937 this used to be the largest market in Asia and was designed by French architect Louis Chauchon. 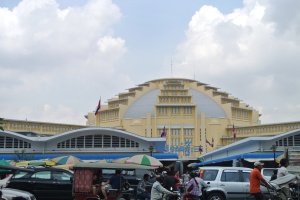 The Central Market (Phsar Thmei) is fully covered and encased mainly in a yellow dome shaped building with four wings. It feels brand new after the French poured money into a refurbishment in 2009 and it sells everything and anything and is all spread out. 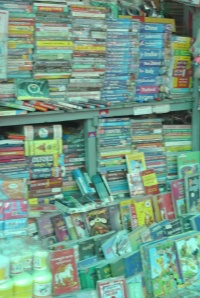 That night we went to a place called ‘The Mansion’ for a drink before meeting Charya and Michel. This old French colonial building (previously the Foreign Correspondants Club) has been left in a decayed state but it is a unique al-fresco bar that has live music and great surroundings.

On the Sunday we went to Diamond Island (Koh Pich). This is an ambitious building project to create a brand new town inside the city full of apartments and malls and full of French inspired architecture. It is obvious from the prices that few Cambodians will live here. The reason we went is to go to the Elite Golf Club. Not to play golf or use the driving range but to use the pool facilities. $5 lets you use this pool all-day. The pool was like facilities in a 5 star hotel.

The best thing is that half the time it is very quiet as not many people are aware it exists. We enjoyed the huge pool to ourselves for a good few hours .

Time for one last sight, the nearby Royal Palace which was all lit up as it was Sunday. Impressive. building. 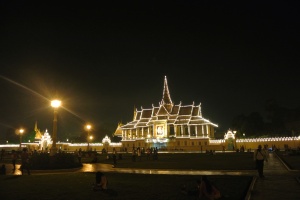 Sadly our time in Cambodia had come to an end, we said our farewells to our friends Charya and Michel, promising to come back and visit hopefully soon.

To be ConfirmedDecember 1, 2021
No current trips planned.
Join 335 other followers