Following on from our visit to Tuol Sleng Genocide Museum.

Later that day we made the journey to the Killing Fields of Cheoung Ek. While not the only Killing Field in Cambodia, Cheoung Ek is the most famous due to its connection with S-21 and it’s proximity to Phnom Penh. 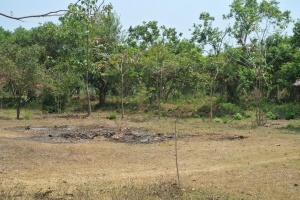 On arrival it looks no different to the many orchards that surround Phnom Penh. White painted walls with lush trees inside. Only after looking at the lintel on the gate and the words ‘Genocide’ are you introduced to its sinister past. After buying our tickets we were handed an audio guide. As much of the former Killing Field was destroyed, this guide is crucial in painting a most grim picture of what went on here. It is also full of victim’s stories and descriptions of the foul deeds that were enacted here. The audio guide was powerful and much more fitting than an actual guide as it helps keep the site silent.

Prisoners normally arrived at night. Blindfolded, bound and stuffed in a van. They were coerced onto this van in Tuol Sleng with soothing words that they were being released or moved to another camp. Like the Nazi Regime before them the Khmer Rouge used deception on their victims when death was stalking them.

After being identified and ticked off a list, they were brought to one of a series of ditches. Here an assortment of weapons from the sharp edge of tree stumps to basic farm tools were used to bludgeon, garrotte and smash the skulls of each prisoners. Economics dictated that bullets were too expensive to waste. 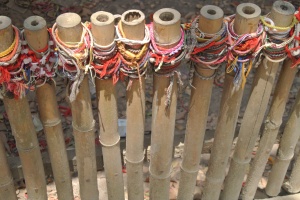 To hear all of this sounds surreal and far away but as we walked around the memorial you could see bone fragments and scraps of clothing scattered about the field. Every year more of these are brought to the surface after it rains, the earth returning its dead. In the centre of the Killing Fields is a pit. Next to that pit is a big tree covered in red stains with tons of marks and scratches. You would not notice the tree if it wasn’t for the collection of colourful bracelets and bands that adorn it. Next to the tree is a small sign saying ’15’. This is the chapter on our audio guide . With trepidation we typed it into our player.

This was the Killing Tree. Hundreds of children, most mere babies, were smashed against it while their mothers were made to watch. Pretty raw stuff!! This was the worst part for us. We sat here for a while trying to compose ourselves and to find the strength to hear any more.

The final stop on the tour was just in front of the massive stupa, that we had been circling the whole time. In here are contained skulls, bone fragments, clothes and weapons that were used. It is a permanent shrine to the horrors perpetrated here and serves as a focal point for the museum.

What struck us was the silence during our visit. No one spoke at the Killing Fields. There was no noise at all, all visitors including us were stunned and shocked by what they have learnt. Everyone sat quietly at the end wiping tears away and reflecting on what they had heard. 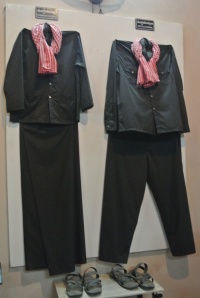 Uniforms of the Khmer Rouge

The Khmer people are very open and honest about what happened here. Every bookshop and street vendor sells books of the subject including “First They Killed My Farther,” By Loung Ung. They are insistent the next generation must know the truth and not a rose tint view. To ensure nothing as brutal ever happens again in Cambodia or any where else in the world.

Island in the SunJanuary 1st, 2019
Popping up to Hervey Bay and Fraser Island