Today was our darkest day since we began our trip. We decided our full day in Phnom Penh would be dedicated to a trip to Tuol Sleng Genocide Museum (S-21), and the Killing Fields of Cheoung Ek. This was going to be a tough day but these were two places we were both keen to visit to gain an appreciation for what happened in Cambodia only 35 years ago.

Warning: this is not one of our usual light hearted posts, the below is not for the faint hearted.

As the tuk tuk pulled up at the grey concrete building Karen’s stomach started to churn already. The building was a former high school which was taken over by the Khmer Rouge and turned into the notorious Security Prison 21 (S-21) and used continuously from its rise to power in April 1975 to its fall in 1979. This was one of at least 150 known execution centres in the country. It was estimated that up to 20, 000 people were imprisoned here over the years, the actual number will never be known. 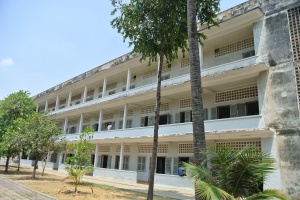 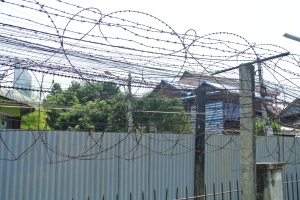 As we purchased our tickets we were asked if we would like a guide, having read that a guide was very worthwhile here we decided to say yes, for once. Our guide was a survivor of the Khmer Rouge regime. Her stories were captivating and sadly the pain of the torture she and her family had gone through was still evidentially raw.

Navigating between each of the torture chambers in Building ‘A’ she described in graphical detail how each prisoner was repeatedly tortured and coerced into naming family members and close associates, who were in turn arrested, tortured and killed. Beatings, nail-pulling, acid and the rack were used to sometimes deadly effect to extract a confession. 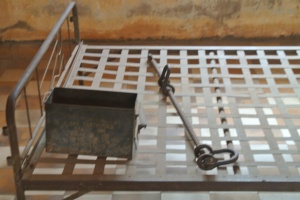 We asked what it was that these people knew, what secrets they kept that were so important. The answer was shocking. The authorities just wanted a story, needed a story so they could round up more people to sadistically beat.

Our next stop was Building B which was used as prisoner accommodation. As we passed what looked like gym equipment, a tall arch like structure where gym ropes would have hung from, we were told of its usage in S-21. A prisoner had his hands tied behind his back, and his feet tied to the rope which was then pulled so that he was suspended in the air from his feet. Then he (or she) was lowered into a big container that would contain either, acid, water or their own faeces. Torture by attempted drowning.

Building B was covered in Barb Wire and the remains of an electrified fence. The reason was that the prison guards did not want the prisoners to commit suicide, so they would not be robbed of their duties.

Building B now contains an exhibition of photographs of victims and villains alike.In the beginning most of the victims were from the previous Lon Nol regime including soldiers, government officials, as well as academics, doctors, teachers, students, factory workers, monks, and engineers. However in later years Pol Pot’s ( Khmer Rouge leader) paranoia turned on its own ranks, this led to thousands of party activists and their families brought to Tuol Sleng and murdered, including Prison Guards themselves.

The next Building, Building C contains the small cells that prisoners were kept in, in between sessions with their torturers. It was during this part of our tour that we learned about the 7 prisoners who managed to survive their time in S-21. Some of them were used as typists and forced to watch their fellow inmates being tortured while they typed confessions of pure fantasy, CIA and KGB plots and cells of rebels in the countryside. 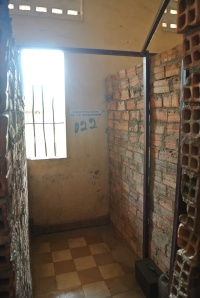 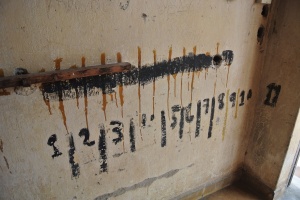 Karen was shaken by that last fact as her own grandfather had been used as an interpreter for fellow prisoners in an Internment Camp on the Isle of Man during World War 2. He was imprisoned for being Italian.

The second section of building C contained a grim collection of manacles and torture tools. Adjourning the walls were a collection of paintings by artist and former inmate Vann Nath. Each painting showed harrowing scenes of what went on in the prisons. 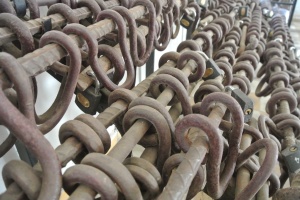 The last Building, Building D contained more documentation and photographs as well as a film room showing documentaries about the prison and life under the Khmer Rouge in general as well as a collection of skulls.

At this point we felt pretty sick at what we had seen. We had no idea that the next few words our guide spoke would bring everything we had just seen and heard into stark reality…

“I worked on the collective farms… They beat me with bamboo canes…. I was only 14… These are the scars. I lost my mum and dad to the Khmer Rouge”

Her feet and legs were covered with scar tissue and abrasions. She was more than a guide, she was a victim of the regime.

Reeling from that awful revelation we left Tuol Sleng Prison and headed to the Killing Fields of Cheoung Ek, the same journey thousands of prisoners had made before.