2006: After spending a number of weeks on the well trodden backpacker trail south from Cairns, Karen and her pals – Sarah and Lori, made the decision to fly from Brisbane to Sydney. The bold move would cut out a good chunk of the New South Wales coastline but it would allow them to make up the time in the cosmopolitan Melbourne and laid-back beach city of Sydney.

2015: Laptop discarded on the sofa in disgust. How could the flights be that much. John any luck on accommodation. What nothing? What the hell is going on up there? Frantic googling reveals a very popular and oversubscribed Blues Festival is on over the Easter holidays. (Spring Break for our American readers 🙂 ).

2016: Laptop gently placed on sofa. Synapses firing the brains and the look of sudden realisation. The pregnant silence interrupted by two words – ‘Blues Festival’. Let’s look at something else for Easter this year. How about Jervis Bay? Excellent idea John. You can do all that Wedding stationary you said you would do.

2017: So Mum and Dad (Iain and Bernadette) want to visit us in November. Where shall we take them on a mini-trip?

There would be only one answer. After eluding John for the previous 2 years and Karen since 2006, it was now within our grasp. Also no Blues Festival at time of year to contend with.

Located 772km north of Sydney and 165km south of Brisbane is a historic meeting place. Called Cavvanbah by the local Arakwal people it is the eastern-most point of mainland Australia. James Cook, then a lieutenant, named it after fellow naval officer John Byron, another circumnavigator of the world and grandfather of the famous poet Lord Byron.

It would remain anonymous ‘but by the grace..’. The standard pattern of industrial hand-offs. Logging,turned to gold mining, to dairy and meat and agriculture. But it was the arrival of longboard surfers in the 1960s that put it on the map.

We are of course talking about Byron Bay.

We arrived in Byron under some clouds. The rain had come in from the west. But it would not last and we picked up the rental car and drove from the Ballina Byron Gateway Airport to our AirBnB right on Byron Bay beach. We spent that first afternoon relaxing by the pool and going into town to get supplies before putting on our glad rags for the evening.

Byron Bay town center is a hive of restaurants, bars, chain franchises and every manner of tourist trap. We would avoid it for that first night as we had a tip. Located in the hinterlands is a little settlement called Bangalow (pop 2,000). Arriving early for our dinner reservation we made our way to the local pub – The Bangalow Hotel just in time for the Meat Raffle. Iain was in his element buying tickets. Bernadette was sure we would win. No one thought about where we put the meat if we won. We couldn’t bring it to the restaurant could we?

We did not win. But we did kill the time between arriving in Bangalow and our seating for dinner. Town was amazing. Degustation menu, random art on the walls and our table in a random room made it all feel like a private dining experience. 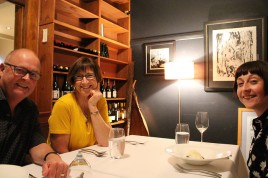 On our first full day in Byron we decided to head out to Cape Byron.Instead of driving up to the car park on top of the cliffs we left the car in town and took the coastal path starting out from the edge of Byron Bay Beach and up to Fisherman’s lookout before turning into the rain forest canopy and around to Wategos Beach to stop for a coffee and a glimpse of some dolphins. 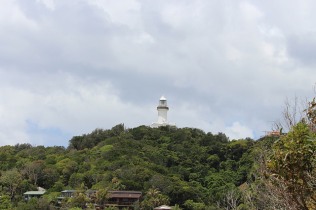 At this point the climb got serious as we ascended up the cliffs to the Cape itself. Our eventual ascent was rewarded with amazing views and a really lovely Lighthouse at the end. 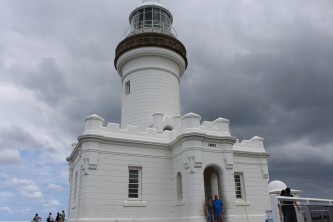 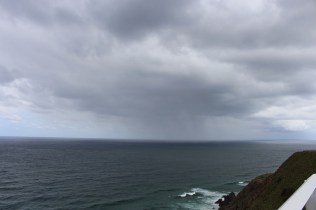 But what goes up must come down. The wind was picking up and the clouds that seemed distant down on the beach were coming in fast. So we double timed it back to the safety of the car.

Dinner that night was a barbecue 🙂

Having spent the previous day gazing out to sea it felt like a good idea to ‘gaze in it’.  Julian Rocks can be seen from the Byron Bay Beach.  It is a unique marine reserve where 500 species of fish exist at another ‘meeting place’ – that of the Great Barrier Reef and the Southern Ocean. 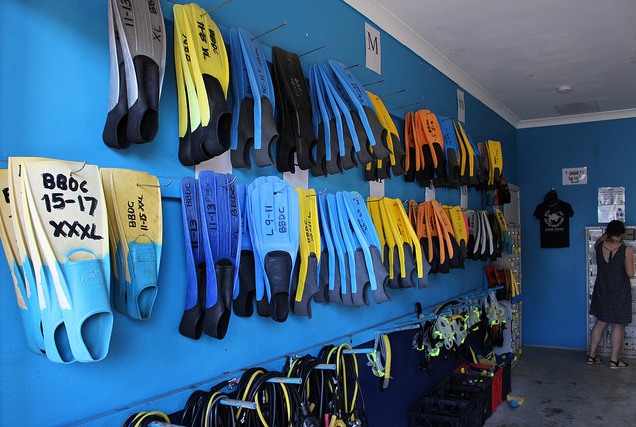 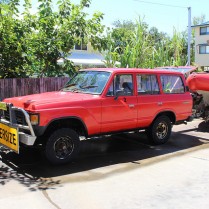 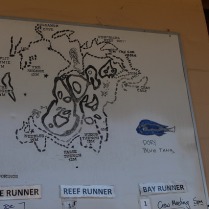 Our journey out to the rocks started in the swimming pool of The Byron Bay Dive Centre. Getting orientated to the scuba equipment and going over the safety briefing. After getting fitted into our rubber suits it was time to jump on the jeep and head out to The Pass, an opening onto Byron Bay Beach near Fisherman’s Lookout.

A few exhilarating minutes were spent darting through the waves on top of our zodiac before we anchored next to our destination.

There is a story from the local Bundjalung people…

‘that a jealous husband threw his spear at the canoe of his wife and her lover. The canoe broke in two and sank to the bottom of the ocean. Only the back and the front of the boat stuck out of the water, creating the rock formation’.

Since 1982 it has been a marine reserve and that decision led to our visit that day. The waves were a bit choppy with water lapping over the rim of the boat. Flipper dampened but not our spirits, we did the fall back maneuver into the water.

Within minutes we were treated to amazing sights including one of the turtles. 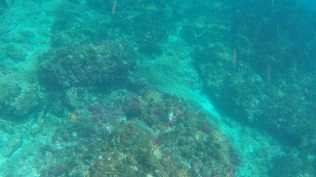 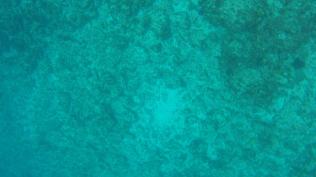 We would need a drink after all that snorkeling…

← Sculptures By the Sea 4: Citizens on Patrol
The Way It Should Be →