Jet lag: a physiological condition that dramatically affects your sleep pattern and wrecks the first few days of any trip from Australia to Europe as you speed across 10 time zones.  Remedies for this malady range from Tamazepam to “a bit of plain toast and de-fizzed 7-up”.

Luckily we arrived in Scotland first this time so we had adjusted to UTC 00:00 by the day it was time for John to drop across the Irish Sea to Cork – the vanguard preparing the way for Karen to come across in a few days time. (When you are both from different places you have to be flexible with time spent in both home lands).

So no jet lag this time that would make John fall asleep, pint in hand sitting in the corner of Jacko’s pub at 8.30pm. It also meant that he could get up early that first full morning and do something other than watch Youtube in bed.

After blogging about walking trails in Australia it was time to add another one from Ireland to that list.

Walking Trail – from the Village to the Town (and back again!)

It is a small saunter down the Cloyne Road to the village of Ballinacurra (Town of the Weir) and then at Kearney’s Cross hang a left up Rose Lane and past the Old Mill. Going right at the cross would bring you down a country road to the Ballinacurra GAA Club.

The Mill was once a thriving hub due to it’s proximity to Ballinacurra Port but it’s in a sorry state these days after a massive fire tore through it in Feb 2017. Continuing up the road brings you to the main street and Corner House Chinese Restaurant (Number 1 in Ballinacurra on TripAdvisor 🙂 )

Following the road brings you to the quays and the estuary of the Owenacurra River. During the 19th Century this port was a hive of activity with distilleries, the main port for the town of Midleton, a Woolen Mill, Malting Houses and a number of other industries dotted up the riverside. Alas it was ultimately down to the prohibitive cost of dredging the river of silt that ended Ballinacurra’s days as a bustling port and it ceased almost all operations by the 1960s.

A few stone buildings and the repatriation of their industry types to name some new apartment blocks are all that is left as you walk down the bailick walk and towards Midleton. There are plans to erect a statue here by 2020 to mark the Bicentenary of the first sighting of Antarctica. It was local boy and Royal Navy Ship’s Master Edward Bransfield who on January 20th 1820 spotted two white mountains covered in snow in what is now the Trinity Peninsula while aboard the merchant vessel Williams.

The other side of the river, past the expanse of mudflats at low tide, is dominated by Ballyannan Woods. These can easily be reached by a walking trail that brings you around the surrounding Garryduff area and to the entrance to the woods themselves. 25 hectares big and having been in existence since at least the 1650s French Naval Down Survey of Cork Harbour and is home to over 25 bird species as well as a handful of bats and even some Owls.

It was dry for once so it made for a great little walk. Bringing the camera meant that John also had a chance to snatch some photos of the numerous bird species that call it home, in particular Grey Herons and Hooded Crows as well as a few  seasonal visitors (Swallows from Africa).

Day for the ducks!

All up it’s a 5 kilometer return journey to Ballinacurra. As you make it back to the car park at the start of the woodland trail and go left (into Midleton) you will come across a very impressive statue with an amazing backstory. 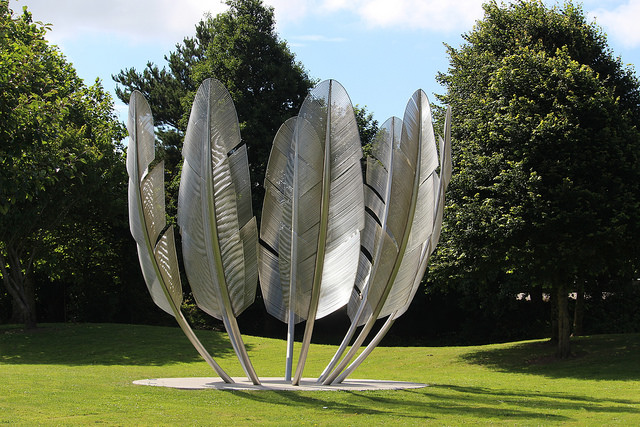 I blogged about this before on one of my last trips back to Midleton , but the story is so poignant that I will rehash it now here again.

‘Kindred Spirits’ by sculptor Alex Pentek commemorates one of the greatest acts of kindness that was ever shown to the Irish people. During the Great Irish Famines of the 1840s – the Choctaw Tribe of Native Americans sent aid, in the form of $710 to ease our woes. This gift has even more significance as it was offered not 15 years after the Trail of Tears – a dark chapter in American History.

In June 2017 a delegation of 20 members of the Choctaw Nation visited the sculpture for a special ceremony to mark the bonds of friendship between the Choctaw and Irish nations.

After getting back from the walk it was agreed that we would go out for lunch down to Castlemartyr, at the golf club that forms a tiny part of Castlemartyr Resort. While it was only a short drive away it would be a major step back in history…

The original castle was built in 1210 by an Order of the Knights Templar under the leadership of Richard De Clare (aka Strongbow). It then fell into the hands of the Fitzgerald Dynasty who held it until they formed the Geraldine League against to oppose Queen Elizabeth I in the disastrous Desmond Rebellion in the 1570s.  To the victors the spoils and the Castle and a vast swathe of neighbouring land was given to Sir Walter Raleigh who held it for over 30 years before selling it to the 1st Earl of Cork Richard Boyle in 1602. It was Boyle who would build the massive Manor House that is the centerpiece of the 5 Star Hotel it has become today.

After lunch we took the time to visit the remains of the original castle and the gardens of the Manor House in the hands of two capable local guides (Emmet and Cameron) who both worked there. 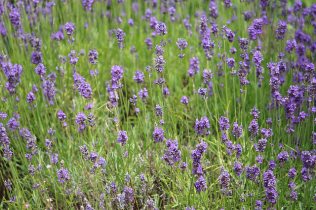 We also took a peek inside to see the aptly named Knights Bar that was previously an Oratory (small chapel) before being converted to cocktail and lounge bar. Finally we played indoor safari as we hunted out the hotel’s menagerie of wooden animals hidden in corridors and underneath stairwells. 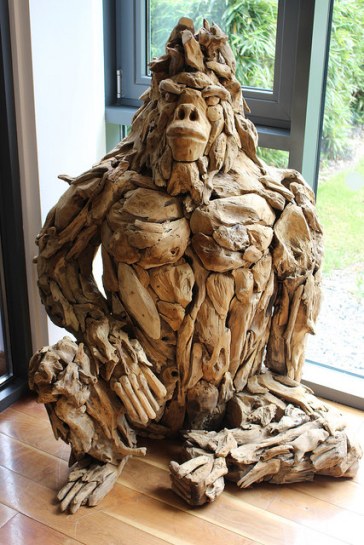 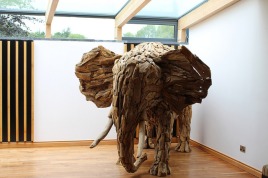 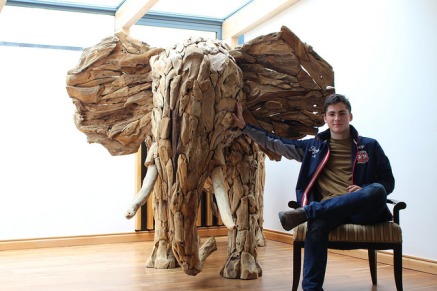 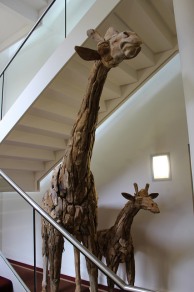 ← Inside Out: Art of Glasgow
Fright of the Earls: Kinsale and Charles Fort →