We would spend our last day of the holiday in the city of Johannesburg (JoBurg from now on). Our original plan had been to just chillax and stay around the pool of our hotel and enjoy the last few hours of freedom before our flight back to Australia and work loomed.

Three years ago that we would have in all likelihood stuck to that original notion. Not anymore. We are “Adventurers” now. So at the last minute, and while queueing to board our plane to JoBurg from George Airport in the Western Cape, we frantically googled for  some exploration ideas.

With nearly 9 million inhabitants and stretching for over 1,600 square kilometres of urban jungle we would need some guidance if we want to do it justice. We were in luck. There was a tour that not only offered a private build-it- yourself itinerary but they also did drop offs to the airport to maximise our time. The company was Ekala Tours and our guide was a man called Malcolm Davis – the owner of the company 🙂 – he turned out to be one of the best guides we have ever had as he weaved present day JoBurg living with past memories and everything in between for a great tour.

We spent the first half hour of that morning exploring the northern neighbourhoods Rosebank and Houghton. Rosebank is covered in forests and has  a Houghton was very affluent and had a lot of art deco mansions, two golf courses and is the location of some of the most prestigious schools in South Africa. We passed the outside of St John’s College which looked just like Xavier’s School for Gifted Youngsters.

We got a good view of the city from Constitution Hill and got a peek at the Old Prison Complex before passing the courts and Nelson Mandela and Oliver Tambo’s old law firm office. There is now a permanent statue of Mandela doing boxing training outside the courts.

While South Africa has 3 Capitals in Bloemfontein, Cape Town and Pretoria it’s largest city is Johannesburg. Like Canberra in Australia, it is a relatively new city and unlike most other cities in the world it is not situated on a river or coastline. In fact it is nowhere near a natural water source.

Its only reason for being is that one of the  largest Gold Seam in the world is located in an escarpment (called the Witswaterrand)  that runs right through the present day downtown area.

This find turned what was once a farm (Vogelstruisfontein) into the modern day El Dorado in 1886 starting from a foundling miners camp under the leadership of Colonel Ignatius Ferreira to the sprawling metropolis it is today.

The rapid rise in gold mining activity led to strained relationships between the Boer Government in nearby Pretoria and the British Cape Colony which culminated in actions leading to the Second Boer War in 1899 that saw British Forces occupy the city under the command of Field Marshal Frederick Sleigh Roberts in 1900. During the fighting many African labourers left the camps and were replaced with workers from China, many of whom stayed on after being replaced by the returning Africans to create JoBurg’s Chinese community.

All that mining has left JoBurg with hundreds of gold dumps – mountains of tailings (waste product of gold) that is waiting for technology to catch up so they can re-process the minute particles of gold to make more bars and nuggets and it looks to be a long hard slog to make that happen.

After downtown Joburg we headed South West and out of the city to our main destination – Soweto (South-Western Township). Originally a separate city of shanty towns and settlements it has since been absorbed into the ever expanding JoBurg Metropolitan Area. It was here that native African workers from the gold mining industries were forced to live as they were not allowed to live within Joburg itself.  This turned the area into a cauldron of poverty, dis-enfranchisement and agitation that boiled over in 1971 with the anti-Afrikaans uprising over education changes. 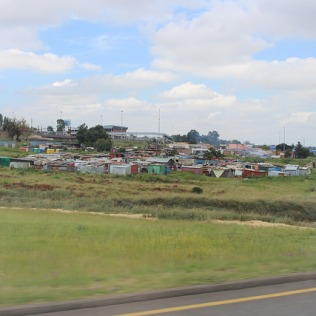 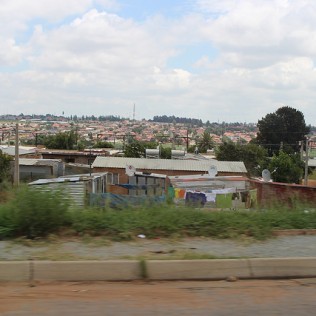 Our guide Malcolm stopped the car next to a small square and asked us to step outside the jeep with him. The area was very calm and serene much different to the event that this memorial was dedicated to. Over 10,000 students attempted to march from Naledi High School to the nearby Orlando Stadium on 16 June 1976 when Police opened fire on them and 23 people were killed, including 12 year old student Hector Pieterson. The image of Hector being carried whilst his sister walked next to him became one of the lasting images of the uprising.

Down the hill was the Orlando Stadium  – the destination of those school protesters. Today it is home to the premier league team Orlando Pirates and has played host a the FIFA 2010 World Cup Kick-Off  Celebration Concert as well as funerals for ANC stalwarts Joe Slovo and Walter Sisulu. 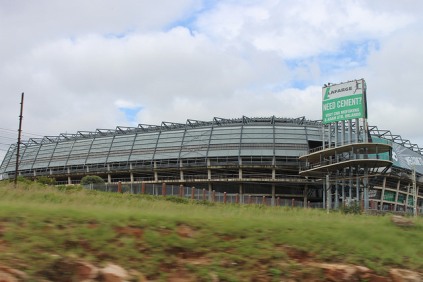 Our next stop was to a small brick house at 8115 Vilakazi Street.  From 1946 to 1962 it was the home of Nelson Mandela and his family. Today it is a heritage museum with a plethora of memorabilia, photos with other world leaders and the World ChampionshipBoxing Belt that was given to Nelson Mandela by Sugar Ray Leonard both in admiration of the man and a nod to the boxing skills he was known to have.

After his release from prison in 1990, Nelson returned to the house declaring he was “glad to be home” before he moved to his estate in Houghton.

We were brought around the house by a local guide who talked at lengths about the various rooms and pointed out some of the external damage to the buildings. Malcolm added some additional strories about how Winnie Mandela stayed in the house whilst Nelson was in prison and about her controversial entourage the Mandela United Football Club.

Trivia: Vilakazi Street is home to not one Nobel Laureate but two as Archbishop Desmond Tutu lived less than 200 metres away!!

Our final stop in Soweto was to the Walter Sisulu Square – the location in 1955 where the Congress of the People met to draw up the Freedom Charter, an alternative vision to the apartheid regime. The document emphasised a non-racial society, liberty and individual rights. The square was named after Walter Sisulu who was a major political activist and ANC party member. The square has a conical brick tower at the centre of the square is a monument to the document itself and contains the full principles of the charter engraved in bronze.

On the way back to JoBurg we passed another stadium and a bunch of brightly coloured cooling towers – some part of the old coal-fired Orlando Power Station. Two of them are joined by a walkway and act as a bungee jump platform these days. Another cooling tower we found next to a stadium was actually used to help with ventilation down a mineshaft below. That stadium was none other than the FNB Stadium aka Soccer City. It is the home of the Kaizer Chiefs (another Premier League Team) and hosts games for the national side (Bafana Bafana). It is the main stadium during the 2010 FIFA World Cup and hosted the final between the Netherlands and Spain.

It’s nickname is the “Calabash” due to its resemblance to that African type of pot. 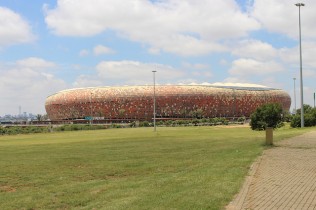 We had just enough time for one more stop – before having to head to the airport. We had spent a few days in Cape Town learning about the struggle against apartheid. We had grabbed a ferry to Robben Island to visit where Nelson Mandela had spent 27 years in prison, and we had just spent the day in Soweto  and Nelson Mandela’s home.

The struggle against apartheid was bigger than just one man and there were more stories than what we had heard so far on our trip. Their was only one place where we could get a bigger picture – The Apartheid Museum in Ormonde, Johannesburg. 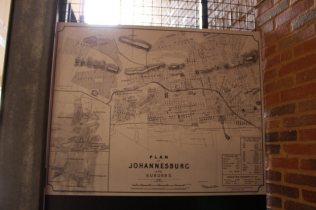 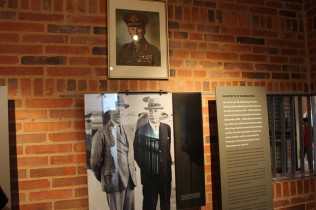 The museum charts the rise and fall of Apartheid and had over 22 different exhibition areas chronicling over 50 years and hundreds of different actors and actresses in this sad and horrific drama. We cannot recommend visiting it enough as not only is it detailed and fascinating but the subject matter is important for everyone to understand. And if you cannot visit it then check out their website as it is jam packed full of information.

At the end of the museum there is an opportunity to pick a different coloured rod and place it in a receptacle. Each of the colours represent a different part of the “rainbow nation” flag and a different character trait of Nelson Mandela.

And with that last symbolic act our South African adventure was over. For nearly 3 weeks we have been enthralled by this amazing country. We shall return…