Another Bank Holiday loomed so we dusted off our map of Australia to work out where we would go next. Darwin and Uluru were the top of our list – our only enemy would be the price of flights for these two. So 2 nights spent on Skyscanner, working out the permutations and possible itineraries. Then Karen threw a spanner in the works with 2 words –  “New Zealand”. Followed up by  “It’s  not that far away and you have only been to 29 countries so maybe we should go!*

We were going to New Zealand. With only 3 hours flight time and cheap-ish flights available we would be able to go and do a city-break in Auckland. Nice!

Working in the Sydney CBD is great for getting to the Airport. We can be as little as 20 minutes from our work desk to the check-in desk and this time was no exception.  In typical NSW fashion this good thing is going to be destroyed by moving the international airport to Badgey’s Creek.

As we queued for check-in we had a bit of an Oh-Sh%$ moment when we realised that we had not checked if we needed a Visa to enter New Zealand. A quick google search determined one was not needed. Phew!

After that shot of adrenalin we made our way to our new haunt, the AMEX Lounge, and got our pre-flight drinks in. 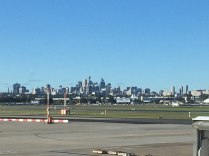 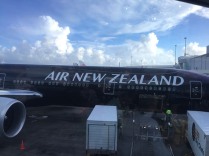 Tip: Get yourself an AMEX credit card (any type) and avail of use of the Lounge at Sydney International Airport – Free Internet, comfy chairs, ambiance, free food and of course – free booze!

Our flight was a code-share with Air New Zealand so we were treated to a bit of a zany, but memorable, in-flight safety video that starred local boy Rhys Darby and Anna Faris.

As our flight cruised across the Tasman Sea we began to think about our destination. Auckland is New Zealand’s largest city and is home to 1 in 3 New Zealanders. It is hemmed in on all sides by water which means that one of the best ways to get around is on a ferry (and it would be very strategic in a game of CIV!).It was settled by the Maori people more than 700 years ago before European Settlement in the early 1800s. In 1840 Auckland began it’s reign as New Zealand’s Capital city for 25 years (before losing that title to Wellington).

It is known as the City of Volcanoes as it is built on the Auckland Volcanic Field – 48 Extinct Volcanoes.

We landed in Auckland International Airport (AKL) late that night and were greeted by customs officials. New Zealand’s Quarantine laws are as strict as Australia’s but the officials are more welcoming. On enquiring if John had any honey on him, he replied

No. No Honey. I am sweet enough as it is!

Instead of official indignation at this light hearted jest, the official merely cried with laughter and welcomed us into the country.

We managed to blag a stamp for our passports since John was unable to use the Automatic Gates due to his more exotic nationality.

The City itself was 25km to the north so we opted for an Airbus to take us there and as we got outside the airport precinct we spotted a most singular road-sign and took note for the journey back.

It was fairly late when we got in so straight to bed. Tomorrow was a day of exploration.

The next morning we awoke and found that geographically we were sandwiched between Judges Bay and the CBD. Now to find some breakfast. A quick google uncovered that we were a few minutes’ walk to the Britomart – Auckland’s main transport hub and home to many bars, cafes and restaurants.  Eggs were scoffed and coffee supped at The Store before we made our way down Queen Street to take in the sights. Our first random sight was the Woolworths Store, or Countdown as it’s called over here!

Queen Street runs on top of the gully that marked the edge of the original European Settlement and it bisects central Auckland. It’s a busy shopping thouroughfare and has dozens of streets running off of it, including the long and prosperous Vulcan Lane and Shortland Street. (“Is it you or is it me…”) 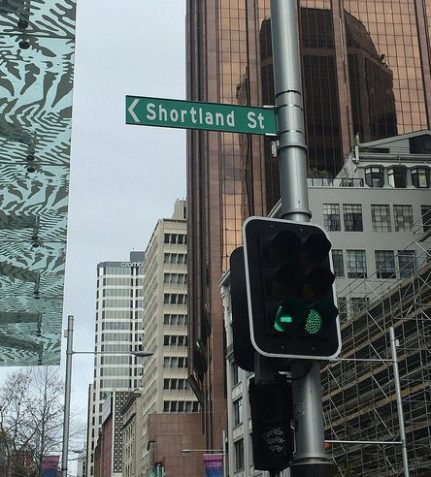 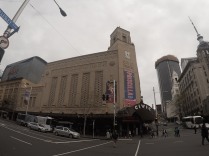 At the top end of the street we took some photos at Aotea Square and then headed for  Albert Park. This planned Victorian park was brimming with huge tress. We were immediately transported to Mirkwood in Middle Earth. There were also two field guns, a huge floral clock and statues of Queen Victoria and Sir George Grey. We did a small circuit of the park as the clouds had started to roll in so we decided to head indoors and go to a recommended place to visit – Toi O Tamaki – Auckland’s Art Gallery. 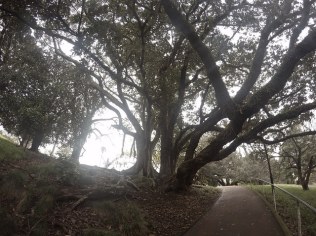 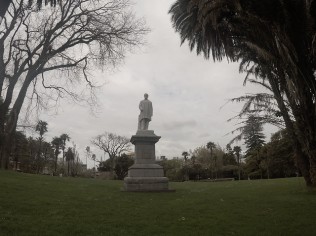 Originally built in 1888, it was New Zealand’s first Art Gallery and only came into existence thanks to generous funding by Sir George Grey and James MacKelvie. Since then it has undergone a plethora of reconstruction and expansion projects and since it’s last transformation in 2013 has gone on to be named World Building of the Year (2013).

There were free walking tours available so we signed up for one of those – which was great as sometimes the story behind an artwork is more fascinating than the artwork itself. Our first destination was to go back outside the building. Most museums house art. Auckland Museum is itself a work of art. The Kari wood ceiling design give the illusion that you are entering a forest canopy but the main attention was drawn to a temporary installation outside.

Nathan Pohio
Raise the anchor, unfurl the sails, set course to the centre of an ever setting sun!

Pohio has used an image by an unknown photographer from 1905, depicting Ngāi Tahu leaders in full ceremonial dress on horseback flanking the Crown’s representatives of the time, Lord and Lady Plunket, in their motor car on their way to Tuahiwi – where a kete was presented to Lady Plunket and the Ngāi Tahu claim brought to vice-regal attention.

Not only was this a classic photo on a grand ‘hollywood’ scale but there is the subtext of the ongoing reconstruction effort in Christchurch, where the piece was originally on display.A new Cultural Identity is being created there with the with the traditional (Ngai Tahu) contesting with the new corporate identity in the Crown controlled CBD land. 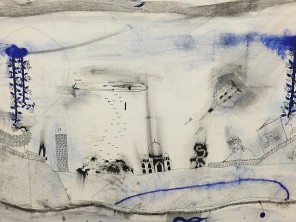 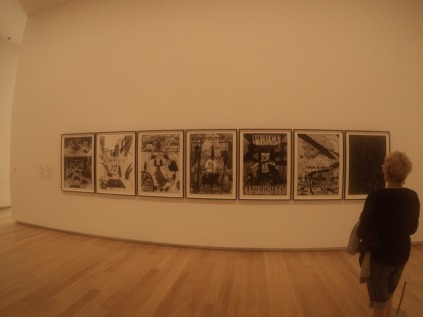 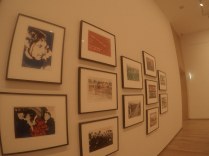 One of our favourite pieces was called Ta Te Whenua by Robert Jehnke. On discovery it looks just like oversized rubber stamps but when you look deeper you see that the page the stamps are on are actually a map of a planned town and the stamps have “Non-Negotiable”. This  represents a sad part of New Zealand History – the Fiscal Envelope. An attempt by the New Zealand government to settle all Maori grievances with a lump sum cash offer. Powerful stuff.

It also served as a reminder of our recent wedding. John had to stamp 140 name places with individual letters so it put a chill down his back.

There were also some works from famous artists with Jacob Epstein’s ‘Torso in metal from the Rock Drill’ and Pablo Picasso’s ‘Verre et Pichet’. Its a good day when you see a Picasso. 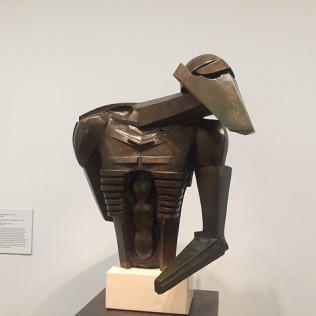 At this point the heavens had well and truly opened and we were caught in the middle of it as we made our way to Ferry Terminal. Our mission was to book ferry tickets to Waiheke Island for the next day – for our wine tour, but instead we had to dodge in and out of cover to not get destroyed by the torrential downpour. As we meandered towards the water we could hear bagpipes through the distant mist and we were instantly transported back to Glasgow 🙂

Speaking of the Ferry Terminal building, it looks amazing with yellow brickwork in an Edwardian Baroque fashion. (Edit: for our non-architecture readers it is the same design as the Flinders Street Station in Melbourne.) It also acts as a great focal point as it stands out against the modern office buildings that surround it. 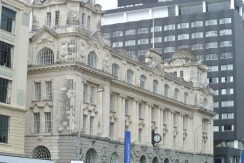 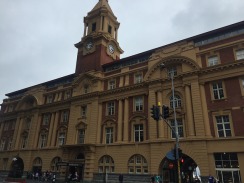 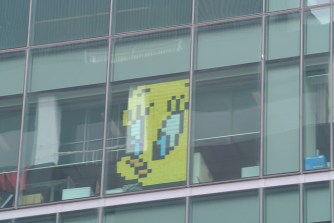 We got our tickets and then decided to grab a drink and a bite of food and try and wait out the rain in a small mexican restaurant with very interesting decor. From high art to street art in 20 minutes!!

Our friend Mandy had told us about this really great restaurant that she went to on her last trip here called Clooney.The only catch was that they only offered the Degustation Menu on the saturday night. We would just have to be brave and go for it!

Once you enter the restaurant you are brought to your table down a darkly lit corridor of curtains they scream “Eyes Wide Shut” before you realise that all the seats are orientated so that everyone is looking at each other. Hmm interesting.

We could give you another paragraph describing the flavours, the setting, and the smells of the food but it’s much better to just show you some pictures. 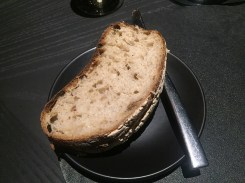 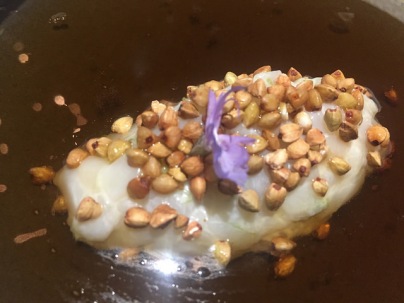 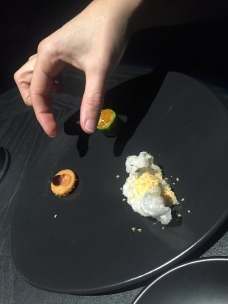 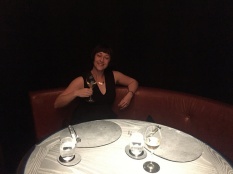 We had survived the 7 courses only to be given a ‘doggy bag’ with an 8th course – for breakfast. After that meal we were #Stuffed so we decided to walk home, taking photos of course. 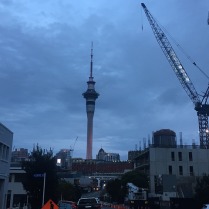 So first full day in Auckland done and as well as having one of the best meals in our lives we had seen some fancy art, explored some random streets and nearly drowned in the rain. Tomorrow we would be going across to Waiheke Island and it’s wineries.

Would the weather break for us? Will we go back to the same cafe for breakfast? What was in that 8th Course box?

Find out next time.

*Of course Karen also wanted to go as she was on 34 countries and wanted to add to her own collection.

← Budapest Part 4: Something Blue
On an Island in the Sun… →