Any trip to Northern Queensland requires hitting the 3 Rs – Rainforest, Reef and Reptiles.

With the first two definitely done and ticked we turned our attentions fully on the last. Already we had seen some Tree Frogs and Boyd Dragons. We also went snorkeling with some Turtles but it was time to up the anti…

It appears that there is a real problem in Queensland with Cane Toads (Bufo Marinas). Introduced to Australia in 1935 from South America with the single mission of eradicating the Cane Beetle that was decimated the sugar cane crops. It soon became apparent that that they were unsuitable to the job and so the farmers had to go back to square one. But there was a catch. When people are desperate they,more often than not, turn to a solution they do not fully understand….

Cane Toads lay around 60,000 eggs a year. They eat almost anything and are highly poisonous. There is a documentary about them, Cane Toads: The Conquest (from the tone of the trailer it should definately be changed to John Carpenter’s Cane Toads)

102 Toads have now multiplied at an exponential rate and there are now millions of Cane Toads. This has led to some local entrepreneurs coming up with an interesting concept – Cane Toad Racing. We noticed that there was a bar in Port Douglas, namely the Iron Bar, that hosted a race night so we popped along to see what all the fuss was about. 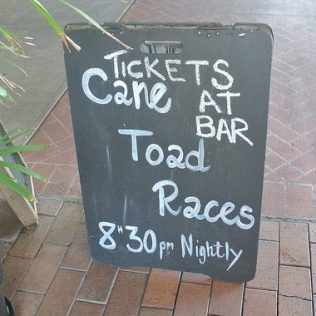 Entry was $5 and the host for the evening, Jeff* was an intense cocktail of part ‘Poundland Steve Irwin Tribute’ and part ‘Shane Warne has seen better days’. He was a veritable banter panther getting the crowd going and mocking the handful of Poms in the audience. But there was definitely a business brain in there somewhere as he diversified his portfolio with a Karaoke machine for a post-race sing-song. 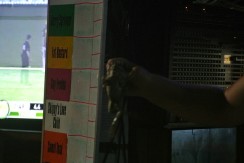 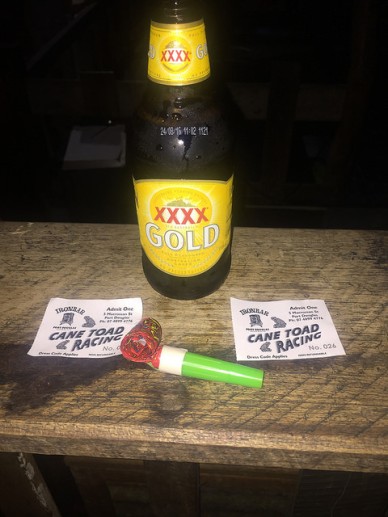 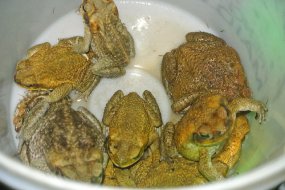 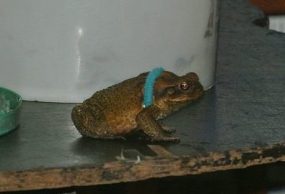 So what is Cane Toad Racing? 6 Cane Toads are placed in the center of a big table. The jockey (i.e. a member of the audience) has to use a party horn to coax their respective toad to one of the table edges. They then have to catch the toad mid-jump and place him in the bucket. The winner being the first jockey to complete the task. 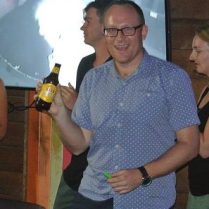 The toads all had funny names, Jerry Springer and Fat Bastard being two of them.

The first race was decided by raffle. This acted as a test so that Jeff could set some odds for the main event – the second race. The second race would be jockeyed by the top bidders for each toad. John was very quick off the mark and won the right to jockey Jerry Springer for only $5.

The pre-race ritual is to kiss the toad for luck which John had to do as Karen had already kissed a frog!! What followed was pure madness – one toad decided to jump into the crowd and half the field were obstinate. In the confusion John managed to come in 3rd place and win a beer for his efforts.

As the toads were packed away and the Karaoke Machine was turned on we took that as our cue to leave. What a random night!

Old MacDonald had a farm

Not content with the ‘glimmer’ of a crocodile that we saw on our Daintree River cruise we decided to make a pit-stop on the way back to Cairns Airport at a small town called Wangetti. Since 1954 there has been a zoo here and over the decades it has grown into a fully-operational Crocodile Farm and Adventure Park.

The Road back down the coast was a lot less stressful than when we braved it the Friday night. Around 40 minutes later we saw the turn-off and entered the park.As we parked the car the weather changed to lashing rain. With no time to wait it out it was a case of camera lens caps off and raincoats on!

The main driving force behind the Crocodile Farm was a man named Gary Zillfleisch. What started as an attempt to catch Crocodiles across Cape York soon became a mission towards conservation. He decided to turn Hartley’s Creek into a “crocodile stud” and farm them.

Hartley’s was the first place in Australia to breed crocs in captivity. Work on crocodile conservation and management attracted worldwide interest and with Television companies and film makers producing documentaries enough public interest and sympathy was gathered to force the government to intervene and declare crocodiles a protected species in 1974.

The Farm was broken into different zones (think Crystal Maze) with a plethora of timed activities across the day. After quick research we found that we would have 20 minutes to wait before the main crocodile events were planned so we decided to get up close and personal with another creature who had thus far eluded us on our trip.

· Can run at speeds of 50km/h through dense forest

Sounds like Velociraptors right? Wrong. It is the Cassowary. We had a 1 in 3 chance to see one previously in the wild in the Daintree but it just wasnt our time. This time we would get our chance. The Cassowary is large flightless bird that looks like an Emu that has had a successful diet. It’s neck is also an Azur blue colour and it rocks a triangular bone on top of their heads. 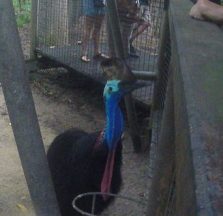 Unfortunately they are endangered in Queensland with only around 20-25% of the population remaining today and that amount is under threat from, you guessed it, Man! Almost 4 in every 5 cassowary deaths are related to man-made causes.

We made our way back to the Croc Zone and started off with a talk and guided tour of the Commercial side of the operation – the Crocodile Farm. There were thousands of Crocodiles milling about and lying on top of one another in the pens.

Our guide also introduced us to the unique adaptations that crocodiles have that make them sounds even more ferocious than one would think.

First up they are ecothermic reptiles. This means that they derive their energy from outisde forces such as the sun rather than indothermic sources like food. This allows them to take control of their metabolic rate or in layman’s terms – they can go without food for months.

Add to this they have a cast-iron stomach, night-vision, a brain that learns from hostile encounters to avoid them, body armour, the hardest grip you can imagine and all those teeth.

No sooner had we digested these facts when we herded onto a boat to go and visit some of the adult crocs in the lagoon. There were 19 of them ranging in size from the little guys at 2.5m to a 5m (yes metres) monster called Spartacus. 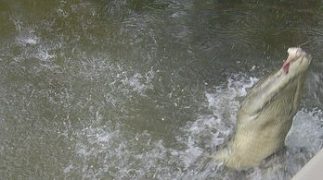 Scary. Back on dry land we next checked out two feeding times for the Saltwater and Freshwater crocodiles. This was an interactive experience with the main zoo keeper feeding the crocodiles while demonstrated some of their capabilities – one of which included getting a crocodile to chase one of his apprentices away from a nest. Bit high wire that! 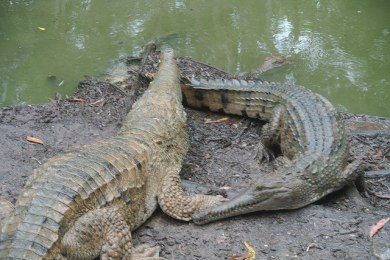 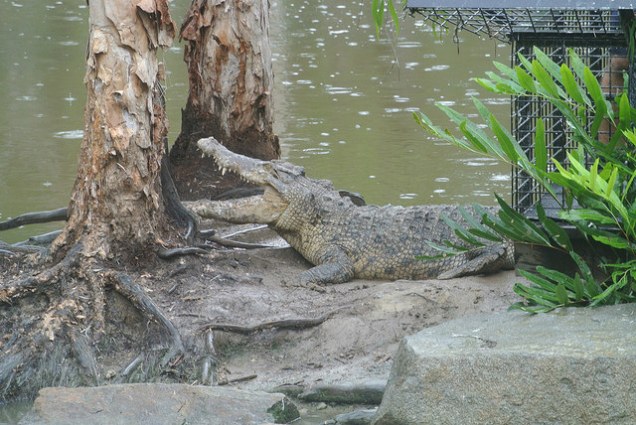 The last activity we could fit in was to stop the beachfront in Cairns to grab some lunch and have a potter around. Karen went in search of some of the place she had frequented 10 years ago as a backpacker and took some photos to send to Lori and Sarah – her partners in crime on that trip.

We had such a great time in Port Douglas and really enjoyed giving the GoPro its first full workout. 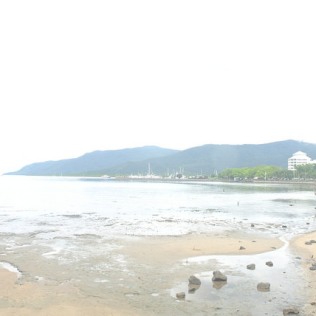 * We think his name was Jeff but it could have been Mike/Steve/Bob. He had one of those ambiguous names and face.

← The Life Aquatic!
Bay of Jervis →