Thursday afternoon and the sun is shining. In a happening city like Sydney there is always something going on… Last week it was a Fan Event for Star Wars VI: The Force Awakens at no less  a venue as the Opera House steps!!

All credit goes to Adam Fernandes for passing on the tickets (begrudgingly I might add as his parents were arriving from the UK that day).

Arriving at Circular Quay at 4pm I met up with my fellow geek Paul and joined the  queue for entry to this event, After about 40 minutes of trudging along (in single files to better hide our numbers!) we started to near the front and begun our visual stimulation in the form of posters and banners.

As we got our tickets scanned the first piece of swag was handed out. A Lego C-3PO :-). This was soon followed up with a Limited Edition Star Wars variant of the Google ‘Cardboard Box’ – a Virtual Reality Viewer that works in conjunction with your phone. (We would proceed to collect all 4 variants throughout the course of the day!!)

With a few interactive stalls to choose from we settled into the nearest line – this was for a 3-wall clip of the new Star Wars trailer presented by Optus. As we were queuing you started to get a sense of just how important this little old Space Opera was to people with a variety of Cosplayers, outfits, every t-shirt variant you can think of and one guy with some of the best tattoos ever!! 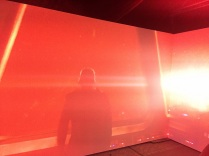 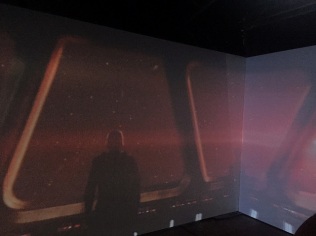 The Master of Ceremonies for the day was none other than Captain Typho (Jay Laga’aia) and after a Quiz section with some fans he welcomed up the first guest of the day – Sphero CEO Paul Berberian – one of the geniuses behind the new BB-8 Droid Toy who spoke about the story behind it’s creation and what to look forward to with Sphero and Disney’s collaboration. (Pretty cool story that you can read about here).

The second guest was from Google Australia and he gave a quick demonstation of the new Google Cardboard Virtual Reality (VR) Viewers as well as the backstory behind their creation. Long story short, like Dorothy from The Wizard of Oz – we had the power of VR on us all along – our phones! (+ 2 lenses and some cardboard)

In between acts we were treated to some serious spinning by DJ Chad (a recent new recruit of the 501st Legion?)

As 7pm rolled around we were treated to the main event. A Question and Answers session with none other than Han Solo himself Harrison Ford!!!!!!!!!!!!!!!!!!!

They say you should  never meet your heroes or you only end up dissappointed. Whoever ‘They’ are have obviously never met Harrison Ford.

After arriving he spent well over 30 minutes greeting fans and signing shirts,memorabilia,posters etc as well as posing for numerous selfies and had the hand literally ‘shaken’ off him.  When he was on stage he was respectful and thoughtful and had a great many things to say including confirmation of his next project… Blade Runner 2 🙂

After Harrison had left and the majority of the crowds had dispersed, Paul and I worked our way through the rest of the exhibtion and stalls. 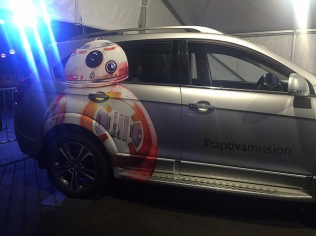 We actually started the day with a surprise celebrity spot in the form of Russell Crowe. Spotted earlier in the day but he seemed to vanish back into the crowds… although eyewitnesses have confirmed a small ship bearing the name ‘Tugger’ was seen sailing for the sunset.

As mentioned the Master of Ceremonies was none other than Jay Langa”aia and the main man himself was Harrison Ford.

Such a great day!

← The Penfolds is mightier than the Sword!
Sculptures by the Sea →