You…Your Bay is on Fire!!

So two points of our Tasmania Triangle have been done – Launceston and Hobart and it was off the the last point – St. Helen’s on the eastern shores.

We plotted our course and the best way to get there was to go back down the Heritage Highway (partway) and then to take the a big right (at Conara) onto the Esk Highway. A good 200km drive was ahead of us so we left early doors and got around 15km before we had to make a dramatic stop…

(For the last few phone calls back to Ireland in the week preceding our trip, all John Snr (John’s Dad) kept harping on about was ‘Tasmanian Honey’ – asking us to find out if it exists?; where it’s made?;is it famous? etc.)

… As we came across the Tasmanian Honey Company at the side of the highway in Perth. We jumped out and took a bunch of photos before entering the shop to look for an appropriate souvenir for John Snr. The lady working there was very helpful and even gave us an order form in case we wanted to bulk buy in the future. Maybe!

Back in the van and it wasn’t too long until we turned onto the Esk Highway – a more rustic driving experience than the previous days. Don’t get us wrong there was some beautiful scenery…just the roads were a lot more windy!

Everything was running smoothly until we reached the town of St. Mary’s, a mere 10km from the eastern coastline. The town itself was nice enough but it was the 20 minutes of driving afterwards that was a bit hairy. To get from the town to the coast you have to enter St. Mary’s Pass – a trail built into the mountains by convicts and is just about as wide as two lanes and windier than any rollercoaster – John’s hands were white from holding onto the handle.

Phew! We had made it through the other side and 20 minutes later we had arrived in St. Helen’s where we would be staying for the night.St. Helen’s used to be a whaling town before reinventing itself as a port for the nearby tin mines in the 19th Century. Today’s its livelihoods depend on the twin prongs of fishing and tourism and it was that latter that brought us here as it is ideally placed in proximity to the Bay of Fires area.

In 1773 Captain Tobias Furneaux witnessed a series of aboriginal fires ashore whilst cruising nearby on the HMS Adventure. This sighting led to the bay being called The Bay of Fires. It lives up to it’s name today with flame-orange rusty coloured granite rocks that dot the coastline and break up a magnificent stretch of beach.

After some lunch we spent the afternoon swimming and getting sunburnt as it was quite a great day, especially as it has been named the ‘hottest place to visit in Tasmania’ by Lonely Planet!

Before heading back to the campsite we headed into town and to the IGA. After getting parking Karen noticed an ice-cream shop so we decided to treat ourselves. This almost didn’t happen as the woman who ran the shop seemed to suggest we had only stepped inside the shop to take advantage of her air-con – the cheeky cow 🙂 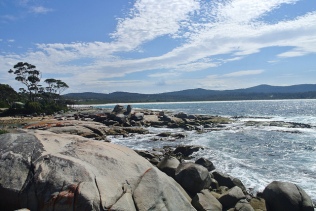 We took a pre-dinner stroll along the waterfront before it was back at the campsite Karen made us dinner on the barbie while I rang ahead and booked our next stop which be important as it would be where Karen would spend her 30th Birthday.