One of the top things to do in and around Launceston is to take a tour of the nearby Tamar Valley – especially a wine tour amongst some of the over 20 vineyards and cellar doors that dot the riverbank.
Since we always explore our surroundings it would have been rude not to sample some of the local wine varieties. We had just one small problem… well actually a big one! 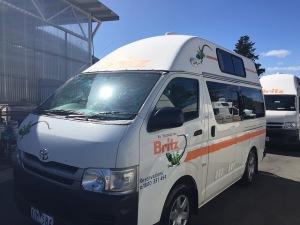 But luckily for us there are guided wine-tour you can book on and we sheepishly selected one in the Launceston Info Centre, scheduled for noon the next day.

Before we knew it the clock showed 12:00pm and we went to the entrance of the campsite. Expecting to see a bus full of other tourists we were taken aback to find a single empty car. It would be a private wine tour – which became dangerously intoxicating later on.
Our guide today would be a lady called Gillian and she treated us to a great day out. After some pleasantries we were off and out of town to our first stop….

Velo
A very modern cellar door complete with a stylish interior discreetly decorated with old wine barrels. One of the highlights was the scenery from the restaurant’s veranda. As lunch was included in the tour we were treated to a sumptuous shared-plate meal of meats, veg and various spreads and breads. We must have been in a good frame of mind as we shared the food without fighting that day. Karen even shared the fillet steak.
The wine was also very good here and after sampling some at lunch and thanks to the more than generous tastings provided by the Lady of the House – Mary Wilson – we made our first purchase of the day – a bottle of the Velo Shiraz! 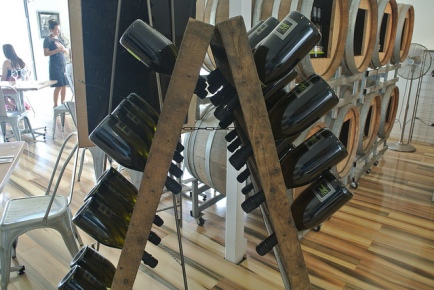 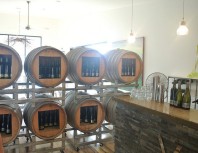 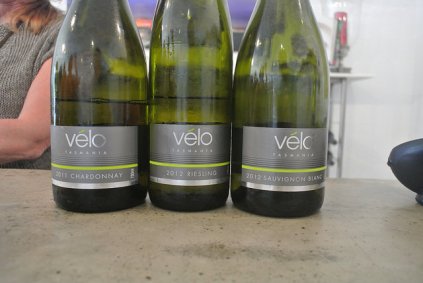 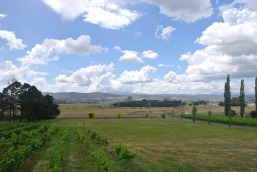 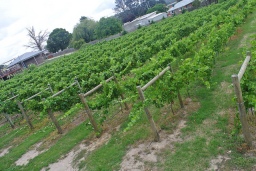 But what’s in a name? Velo is a clever nod to the proprietor’s former life. Michael Wilson took part in 9 Grand Tours of cycling and represented the National Team at the Summer Olympics in Moscow (1980).

Tamar Ridge
We went from the family run Velo up the western bank of the Tamar River to the wine machine that is Tamar Ridge. Part of the Brown Brother’s empire this was a stronghold of red wines. The views were even better up here with landscape shots to the bending Tamar River below. We enjoyed the fizzy red wines and ended up buying another bottle (you can see a trend forming here!) 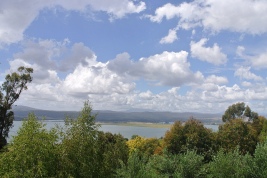 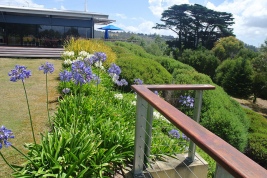 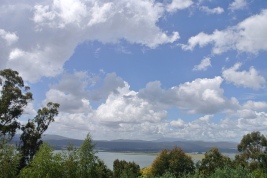 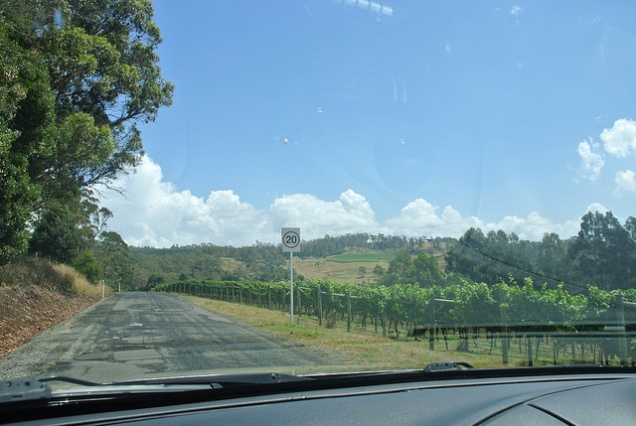 But it was not just vino flowing in this establishment. We also heard stories from the lady working there about her trip to Scotland and that one of the wonders of the world, in her opinion, was the Falkirk Wheel! This visit also put our potential ennui with our campervan back in perspective as we met an Australian couple (and their 3 young children) who were 6 weeks into a 6 month Trans-Australia driving holiday.Yikes!

Unknown Shed of not so good wine
So at this point we had had a few wines and the chat was flowing in the car. Gillian picked up on our London backstory. In a moment of what I would describe as ‘Joey Tribbiani logic’, she decided to take us to a slightly different cellar door because the proprietors were English and, well we had lived in England! #Connection!
What followed was a bit of an awkward 15 mins as Karen tried not to visibly gag on the wine that they had made, while John distracted the German guy working there while trying to empty his glass incognito.
It shows that we cannot even remember the name of this place! If you hear a German accent on entry to a cellar door in the future…. get away fast! 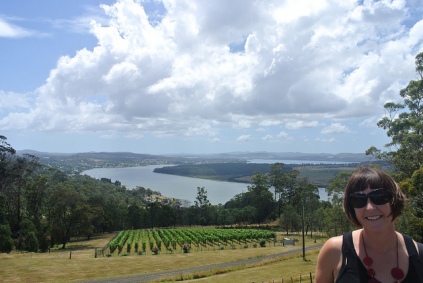 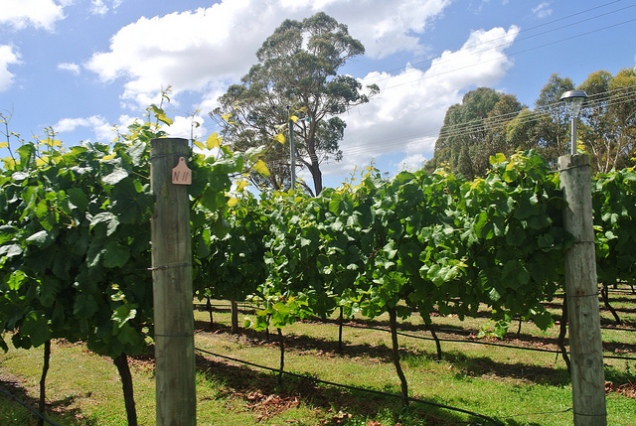 Wines for Joanie
Set a bit further in the Tasmanian countryside this vineyard looked like it was an unused set from The Proposition. It is more farm than cellar door but we loved it. Owned by Andrew & Prue O’Shanesy, these cattle farmers turned viticulturists have only just opened so it was all about the taste of their wines and bubblies than any preconceived brand recognition. 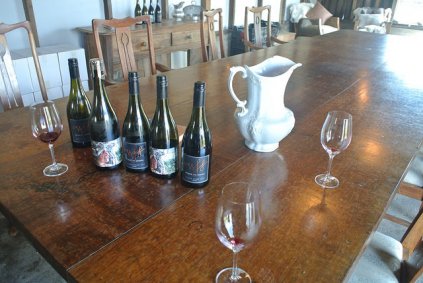 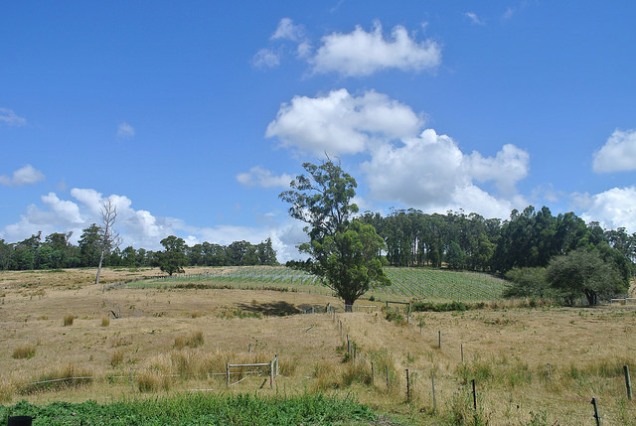 A bit more expensive than the other cellar doors but the quality was there to taste. The labelling was also a bit funky as the whole premise behind the business springs from that fact that Andrew’s mum, Joanie, used to joke that he should learn to make wine just for her. It was a really great dedication to someone special and we laughed as we thought that John’s mum Helen, probably had the same dream!

This small family run Cellar Door was the penultimate stop on the tour. The novelty here was that they have a pet pig who you can feed. They also do wine as well. With some red wine and some fizz already in the boot we decided to get a bottle of Pinot Gris that tasted amazing on the day but must have lost it’s ‘body’ on the flight home as it turned out to be only alright. That said the tastings here were very very generous. 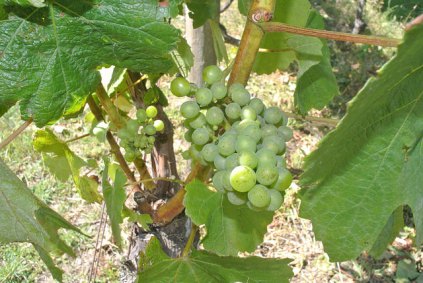 After this point we went to one more cellar door – just down the road – but at this point we were going through the motions – Karen had stopped drinking altogether and there is only so much banter to be had with non-paying customers.

We pleaded Gillian to take us back to Launceston as we had dinner plans and we were well and truly sloshed at that point.

After a wee snooze back in the campervan we got spruced up for a nice meal. The Filippi Clan had put together some funds to treat Karen (and by association John) to a nice meal for her 30th Birthday. We made a great choice in Stillwater – although it was such a shame that we had to work our way through their extensive and exciting cocktail menu as we couldn’t stomach any more wine – who would have thought that possible – eh Gerry Finn 😉 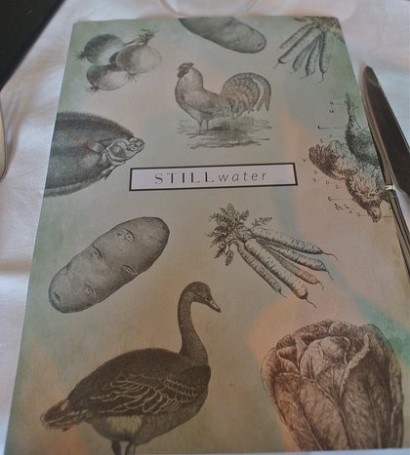 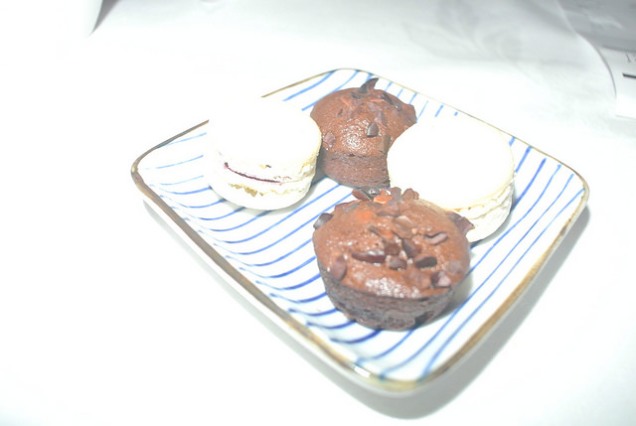