Pardon me. Amed is crawling with so many French tourists that we forgot who we were. Let me try again…

We arrived in Amed, with its black sandy beaches and calm tempo. Our Hotel was a room behind a DIVE shop/cafe and what a dive it was!! The most dirtiest expensive room yet. It was so bad that we left after one night. We aren’t snobs but when you have to sleep in silk sleeping bags and the restaurant is filthy you have to move. There wasn’t even a roof in the bathroom so you were getting two showers at once when it rained, and it did!

To escape from the DIVEshop we went for a walk in the village and got out onto the beach. The vista was like a scene from a postcard brought forth to life… 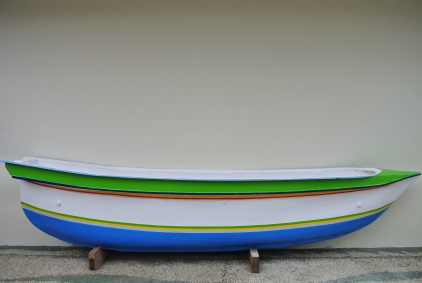 Hand painted wooden fishing boats (catamaran style) nestled together on sand as black as ochre. To our left in the distance but towering over the horizon was Mount Agung, the volcano lying silent for now but wasn’t always the case. On the right, weather permitting you can see across the sea it’s cousin Mount Rinjani sitting proudly on Lombok Island. The water before us looked like a mirror in the midday sun, it’s clear blue surface shining brightly. All that was missing was a dolphin jumping out of the water in the middle distance!

You would have thought you were in the south of France due to the abundance of Gallic accents wafting through the air. But then it is late July/August!

Walking along the beach was hard going due to it’s pebbly consistency. Karen, wearing flimsy Havanas was struggling. As we rounded the headland we noticed a great looking local beach bar so we stopped here for lunch and returned to take in sunset later on. Like all the other establishments in Amed in general and Jemeluk Village in particular it displayed the name ‘Warung’ on it’s signboards.

Warung is an Indonesian word that means (look this up might be Kitchen or cooking or something else or home). It’s also a watchword (most of the time) for great food at good prices!

So back to the DIVEshop and we tucked in for the night. Literally tucked into our sleeping liners as the bedclothes were dirtier than a kebab from one of those vendors outside the Garage in Glasgow.

The next day we were on the clock. We had to secure new lodgings before 11am checkout if we were going to get away with only paying for the one night we had stayed there. Luckily we managed to find another place that was not only better but on the beach and cheaper, so we moved in. The last laugh was had when our first place, that DIVEshop was so disorganised that they charged us the 25% less walk-in-rate instead of the on-line rate. We were in such a hurry that we (conveniently) forgot to correct their error.

With our bags moved it was time to enjoy the rest of the day in Amed.

Past the beach and various cafes and restaurants dotted along the road there is not much to this area on land. All the action is on (or in) the water. Diving, snorkelling, fishing, swimming, free-diving, kite-surfing, and vanilla surfing is the fare on offer.

Renting snorkelling goggles from our new guesthouse we made our way up to the pier and the best snorkelling spot on the beach. The water was so clear that we could see to the bottom. Coral of all different shapes played host to fish of all different hues and tail sizes. Really great for snorkelling. Had we been into diving we would have been overly well supplied with not one but two shipwrecks nearby to dive amongst but sadly we haven’t really done diving (yet!).

And so for the next two days we went swimming and sunbathing by day, and took in live music by night. The only bit of pressure that time was having to deal with the landlord. He would be all smiles one minute and then dour and sullen the next minute, a prisoner of mood we believe!

Amed was amazing but was ever only going to consume a few days. We had other destinations and experiences in mind so after 3 nights we left that next morning on the fast boat to the Gili Islands, off the coast of Lombok.