For many years I (Karen) have always wanted to walk the wall, not just any wall but the Great Wall of China.

Since this had been at the top of my bucket list for years we spent a while researching and discussing which part to tackle. We opted for Jingshanling.

As it was over 3 hrs drive from Beijing few tourists made the trip. This meant we would have a more intimate experience and would not need to jostle for photos (hopefully!)

The Jingshanling area of the wall is a mixture of restored pieces and original wall and stretches for over 10kms. Some sections would involve climbing and tackling the broken parts of the wall so Flip Flops were abandoned and Running Shoes were donned. 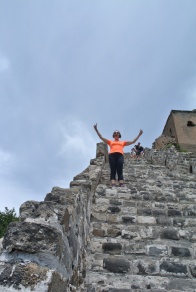 The long drive meant an early rise to catch the bus. Our plan to have an early night was banished when we met a young fellow Scot, Joe at the hostel. Several Beers later and lots of travel stories shared we headed to our room at midnight. Reminded by Amy, the manager of the hostel ‘ don’t be late’ for your 6am pick up.

Sleepy but excited we headed to the bus, we quickly woke up when breakfast was served on route- a McDonalds with a full fat coke at 7am- only in China! John was smiling.

With no one behind us we held back and after a few minutes we ended up with enough of a gap to get great photos. We weren’t the only smart cookies and were joined by a guy from Bristol. This turned out to be good as he took some photos of the two of us. 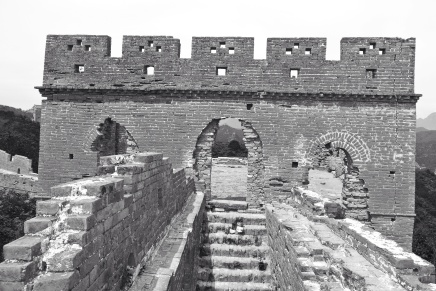 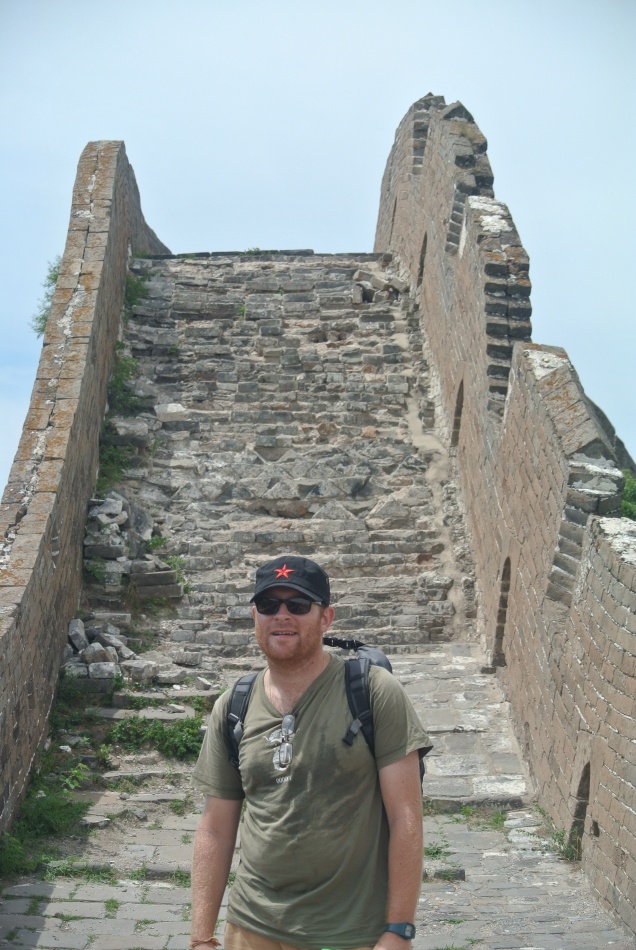 It was such a perfect day. Clear blue skies, and the sun was shinning. The mountainous setting around the wall made for some spectacular photos.

While tackling a tough section of the wall we were stopped by a Chinese family who were keen to have their photos taken with us. In our new China Celeb status we obliged dawning our sunglasses and cheesy grins.

The hike over the crumbled section of the wall was worth it for the view from the tower. 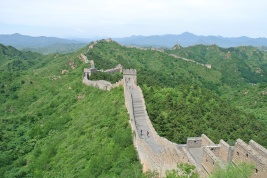 The photo shots and climb were hungry work so we began our descend to have a late lunch. Afterwards we made our way back to Beijing with an SD card full of photos, fantastic memories and a big tick on my bucket list.

If you are swaying about going to China, I would say the climb on the wall is phenomenal and quickly makes you forget your frustrations in the country. Just do it…