Karen said that this didn’t warrant it’s own post and she deleted some of the videos we took of it to make space of her phone but I am dying to share our experience at the Thang Long Water Puppet Theatre in Hanoi. 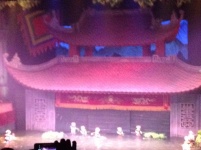 For those of you who don’t know what this is, here is a brief synopsis.

Water Puppetry, or Múa rối nước (“puppets that dance on water”), is a tradition in Vietnam that dates back to the 11th Century. It originated in the villages of the Red River Delta, north of present day Hanoi.

The puppets are made of wood and then lacquered and the stage is actually a waist-deep pool of water. A large rod supports the puppet under the water and is used by the puppeteers, who are normally hidden behind a screen, to control them. Thus the puppets appear to be moving over the water.

It is believed that this is how the rice farmers entertained one another after the fields are flooded during the rainy season.

These days the shows are played to accompanying music by a traditional orchestra and consist of 8-10 puppeteers control dozens of puppets as they relive important folk tales in the form of short skits. Vietnamese Opera singing is used to convey the story and lighting and fireworks to rack up the drama.

Karen had been before with her friend Paula so she had to be enticed to come again. While the show was a bit gimmicky and didn’t last that long it was quite enjoyable and after our last foray with ‘local culture shows’ we embraced it with relish.

A good bit of trivia…for many years the secrets of this art were closely guarded and only make members of a performers family were passed this knowledge down. Female members, it was feared, would take the secrets with then if they married outside the village.