And they were all Yellow..

Hoi an, a Unesco heritage village since 1999, on the coast with almost as many tailor shops as it has people was our next stop. Karen knew the above fact only too well, in 2007 herself and Paula came back from Hoi an with empty purses but suits, winter coats, shoes, boots, handbags and dresses. This time Karen would have to resist the urge to shop. 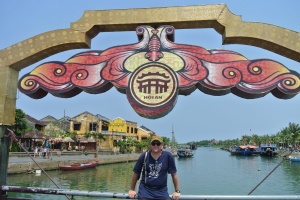 This was going to be difficult as even our new home for the next 3 nights The Moon Homestay was a tailor shop. Moon, the owner was desperate to offer her tailoring service.

The beauty of Hoi an is you can spend hours pottering around all the yellow coloured streets, taking photos, stopping for some home brew beer (for a mere 15p a glass)and window shopping. That is just what we did, a mixture of walking and cycling to explore the beautiful town.

The famous boat cruises we were being constantly sold.

Yes we even braved the Vietnamese traffic and took full advantage of the free bicycles at the Homestay. These bicycles were brand new, a huge step up from those hired in Siem Reap. The traffic was very mild compared to the cites and soon we found our way navigating thru the back streets, over bridges out of town thru the rice paddies. The rice paddies became our new running route, what an amazing place to run. 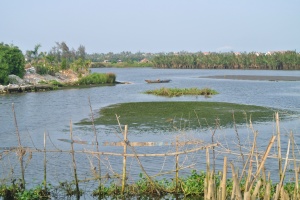 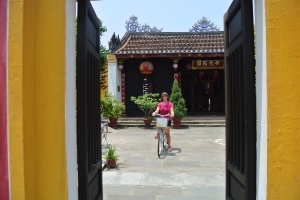 The Paddy in the fields.

2 days were devoted to culture. Exploring the Chinese Congregation Halls,the fabulous Japanese covered bridge and cycling along the backstreets of the Old Town. After all that a lazy day at the beach was on the horizon. We mounted our bikes and cycled the 4km route to the beach. An Bang beach still remains unspoiled so we chose this over the Cau Dau beach up the road.

As we got close to the sea there were screams…it was all the local ladies fighting for our business to use their space to park our bikes! We quickly obeyed, parked and chained the bikes in return we received a ticket to claim our bikes back.

As we got to the beach there was rows of sun beds, some jam packed together and others more spread out. Karen headed straight for the beds which felt less like a package holiday hotel pool. But to get to the beds she had her eye on she was blocked by the local lady working at the restaurant of the First set of beds. Who insisted she had to sit there. Quickly Karen sussed out the beds she had her eye on belonged to another bar. In an authoritative voice she insisted I will sit where I like, John sheepishly followed! 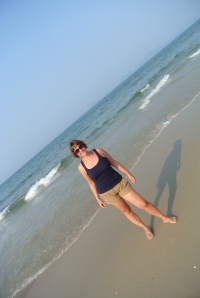 As we settled into our books under an umbrella, we soon watched the entertainment unfold. There was now 4 or 5 ladies from different restaurants using the rugby tactics to stop tourists from walking past their sun beds. These beds were ‘free’ if you bought food and drink from the bars. However there was no real divide or distinction for tourist thus resulting in many tourists trying to order food or drink from the ‘wrong’ restaurant. This caused huge drama of the centre backs moving people out of the rival restaurant back to their place. This gave us great amusement.

Back at our Homestay we meet several fellow travellers, from US, Norway and Israel. We had a lovely time sharing travel stories and tips. The previous evening John joined the owner’s husband to watch the Everton match in the family living room. He felt like he was back at home.

We had dinner in a restaurant called Streets that was run by an American. All the staff were previously street urchins who were given a second chance and taught skills that would help them gain employment. They were very friendly and we enjoyed our visit here so much we ate here twice. Highly recommend.

Hoi an is a beautiful town with great traditional character and a a beautiful beach a short bike ride away. We highly recommend a visit. Everyone is so friendly and the gentle reminders are a little less obvious here. 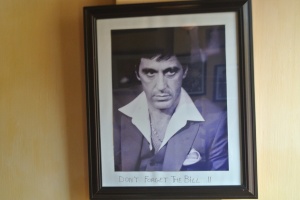 as a footnote: Karen wore one of her ‘Hoi An’ suits the night she first met John, 3 weeks after her trip there in 2007!

← The Road Less Travelled
As seen on Top Gear. →