It was mad to be back in amongst the craziness of Saigon ( Ho Chi Min) almost 7 years on from my trip with Paula. I couldn’t believe how much more commercialised, tourist friendly it had become. Now there are pedestrian crossing and traffic lights… A long way from Paula and I holding hands and praying we made it to the other side alive. However I soon realised although there are now crossings the traffic is still as mad as ever and no one really stops at the crossing anyway- maybe the city hadn’t changed too much after all.

We navigated ourselves thru the city in search of a Lonely planet top choice restaurant, after 1 hour we realised we were completely lost. Even John never used his phrase…’it is just round the corner.’ Finding our way back to the guest house we re studied the map, soon to realise we had walked in the compete wrong direction. O well we saw the mean back streets of District 5 and 6.

To ensure we never got lost 2 days running we opted for a quick taxi journey to the War Remnants Museum. A 5 min drive we were there at 11.20 easy. Pity it closes at 12-1.30 pm for lunch, not enough time to take it all in. Lesson learnt check opening times.

While we waited until 1.30pm we embarked in one of John Rose’s infamous walking tours. We started with the Notre Dame Cathedral, whose building materials were all imported from France (mostly Marseille), and which today played host to a wedding photoshoot. Across the road was the Old Saigon Central Post Office. Constructed in the late 1800s in neo-classical architecture this building is still used as a Post Office today. The fact that it was designed and constructed by Gustave Eiffel has led to it being a famous landmark.

Get me the Kremlin!

As we turned a corner we saw a big statue of the Bak Ho, (Uncle Ho) in front of the HCMC People’s Committee Hall. We had time for one museum before heading back to the start so we saw the HCMC Museum. Situated in an old French Palace this museum covers the history of the city from Stone Age to Present Day. It used to be the headquarters for the British, French (twice) and Japanese Governors of Vietnam, but today it played host to a wedding photoshoot (yes the same one from above- they were following us. 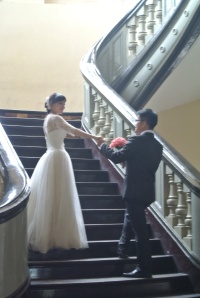 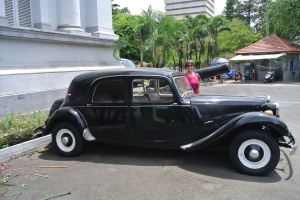 Walking back we passed the Opera House ( Municipal Theatre). It looks familiar as it’s design was based on the Opéra Garnier in Paris. It is around the corner from the Hotel Continental which played a huge role in the Graham Greene novel ‘The Quiet American’. He wrote the book from room 214.

Karen even found the hotel herself and Paula had stayed. This area was now full of high end designer shops. We also found the restaurant we had spent the previous day searching for, that was lunch sorted.

After a pit stop for a lime soda each it was time to hit the War Remnants Museum. Unlike museums like the Imperial War Museum in London, this is not just all about Tanks and guns and bombs (although it has a ton of these on display). There are sections relating to War Crimes inflicted on the Vietnamese as well as chilling exhibits of Tiger Cages ( for humans!) and victims of Agent Orange. One of the truly awful things is that nearly 40 years after the war ended there are still Vietnamese people being born with awful side-effects of the Dioxin poison.

On the second floor there is a gallery with famous photo by war photographers such as Bunyo Ishikawa (Japan) and a section devoted to the My Lai Massacre.

After a busy day we navigated ourselves back to the guest house.That evening we found some great ‘bars’ which simply are cardboard and matts arranged for the customers to sit outside the shop front on the pavement with a bottle of beer or a jam jar of cocktails. We quickly joined in, shoes off to protect the ‘carpet’ and even tried some local rice cakes from a street seller. We opted for a local food stall down an alley for dinner. The noodles and rice were yum and all for less than £1.

Playing up for the camera!

A great start to our time in Vietnam. Tomorrow we would mount a motorbike and tour the city at night to taste real street food.