Angkor Who? : Part 2 ‘The Angkor Empire Strikes Back’

A slightly later start was allowed for day 2 as we would not be travelling as far. Today we would be concentrating on the temples to the North and East of Ta Prohm, tightening the perimeter around our final days sights. First up on the menu was Preah Khan.

To get here we took the busy route past Angkor Wat and straight through Angkor Thom’s Southern Gate to head to Preah Khan, which lies directly to the north. 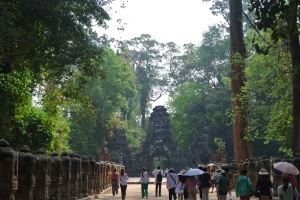 The temple of Preah Khan, or Sacred Sword, is one of the largest complexes in the area. It contains a maze of vaulted corridors and lichen clad stonework amongst its ruins. It served as the temporary residence of King Jayavarman VII while Angkor Thom was being constructed.

The temple itself is situated in the middle of a jungle setting and is surrounded by a large wall with four gates. Atop each gate are the face statues seen more prominently at Bayon. The temple is reached by a causeway that is flanked by a depiction of the Churning of the Ocean of Milk (Tug of War) ( http://en.wikipedia.org/wiki/Samudra_manthan) on each side. 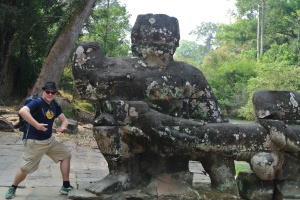 Odd one out competition!

Room with a view

Like the bad guys hideouts in the Adam West Batman show

On the eastern wall there are some trees that have taken root inside the temple and now their roots hug the walls and reach for the stars!

Attack of the plants! 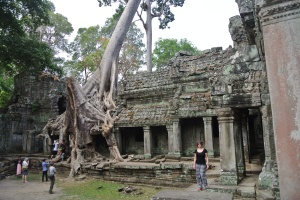 A Buddhist Temple for a change.

This small temple was constructed in the 12th Century AD. It consists of a tiny temple in the middle of a large pool, surrounded by four smaller pools. There are two twisted snakes in the centre (Nagas) and this is where the name Neak Pean is derived.

To reach this temple you have to walk 300m across a wooden causeway that bisects the remnants of an old lake. It now looks quite ominous and eerie with trees all twisted and murky waters. We felt at any moment that we would be attacked by river trolls or zombies.

This was quite a different place to the temples we visited before. 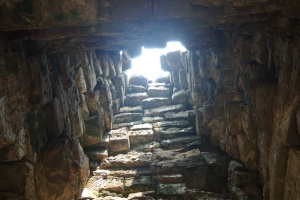 Chimney to the gods!

Another Buddhist Temple from the same era as Neak Pean and situated to the east of that same temple.King Jayavarman VII built this temple in dedication to his father the previous king.

Example of the carvings here at Ta Som! 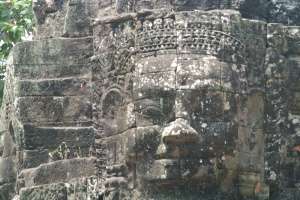 The last temple before lunch as we were starting to flag.

This was a Hindu Temple that 700 years ago would be sitting right bang in the middle of a massive lake. Instead the lake has dried up and it sits on dry land once more. 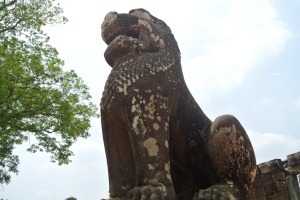 The steps here were very steep and at one point Karen almost needed to Gillian Lester Technique and go back down them on her bottom.

The top has 5 towers arranged like a ‘five’ on a dice or domino. All four flanks of the temple had a huge elephant statue guarding it. 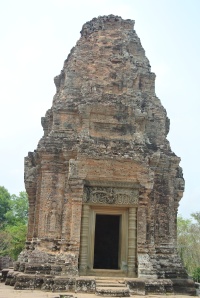 One of the five towers

With 1pm on the clock and the sun starting to sear our skin we went for some lunch. We opted to go back to the restaurant a little bit away (near Bantay Samre). Not because we liked the food or anything but for the simple fact that we left our Cambodia Guidebook behind us the day before.

One more temple after lunch and we would be finished for today. 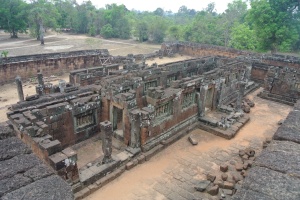 A larger version of the previous temple (with more steps), East Mebon. So similar that John argued with Karen that they had been there before. As usual Karen was right and a swift apology was in order from the Irishman.

Not in the same condition as it’s smaller cousin. Pre Rup’s towers are propped up by wooden support beams in places. 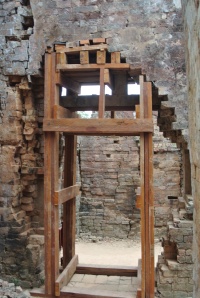 It is named after the typical cremation technique used here, “Turning of the Body”. The body’s outline is first drawn in the cinders one way and then the other.

That was day two finished and so far almost 1500 photos have been taken of the temples!! 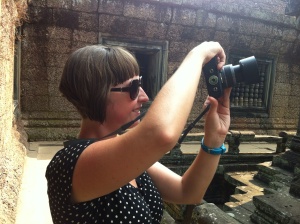