Our Houseboat in the middle…

Our penultimate stop in India was the backwaters in Kerala. The main hub and best chance to get a houseboat was in a town called Allepey.

In order to avoid the weekend rush we waited until the Sunday to take a boat. This left us with 2 nights to fill. After reading up all the guides and websites we settled on this lovely Beach Hut place called Mandala’s.

Boy how wrong were we!

While we were promised some of the best food in all of India in one of the most relaxing and enjoyable haunts in Kerala what we got was a run down dump of a place. It reminded of us of the movie Hook. Peter Pan is now a hot-shot lawyer and he has left the base in the charge of the Lost Boys and they have just left the place stagnate.

Our host was the enigmatic Babu ( the only Indian I have ever seen with a full Afro hairstyle btw). He spent the day smoking and not caring much. His cohorts were a mixture of biker gang and schoolboys who lorded over the place.

Apart from the fee for the room the other benefit we brought was for Karen to clean the bathroom for him. Anti bacteria wipes and a bottle of hand sanitiser later it was liveable…just!

But onwards and certainly upwards…we spent two days exploring the beach and the city including the 150 year old pier and a boat ride through those canals. 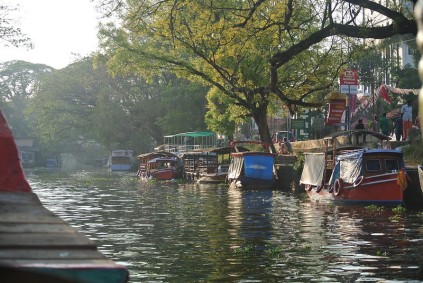 Sunday rolled around and we made our way to Finishing Point to pick up our boat. It was nothing short of amazing. Welcome drinks were waiting for us and all. 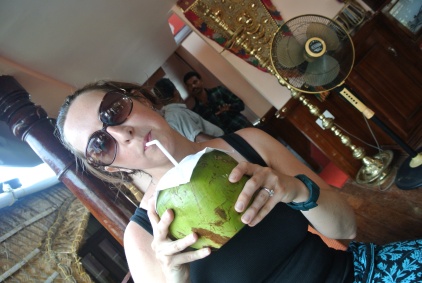 Our skipper Mr Shanakar was very friendly and our chef Ravi turned out some of the best meals to date from his small kitchen. He cooked for the Scottish palette…banana fritters.

Attack of the Veg!

With over 1000 houseboats on the waters at any one time we were able to make a good choice. We enjoyed jumping on and off the various boats searching for the right 1.

For 2 full days we sailed around the backwaters and took in the sights. Highlights were picking Lake Prawns for dinner, taking a small rowboat down the smaller streams  but the for dinner and the funniest occurrence happened when John entrusted his hair to an old man and his scissors for a £1 haircut. 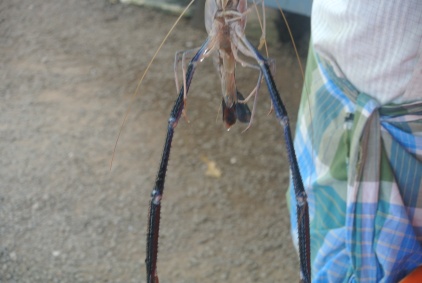 Even the prawn was too big for the picture

Laugh it up Karen!

The finishing product  of John’s hair is now reminiscent of Robert De Niro in Taxi Driver – thank god for hats.

One man and his boat

A true highlihgt however was that of the Kerala Duck Farmers. We were cruising along and lying back on the sundeck when an almight thunderous sound erupted – as we sailed nearer it grew to a cacophony of quacks – we had encountered thousands of ducks. They were being guided by 3 farmers in boats who were francticaly herding them across a canal to a waiting marshland field. 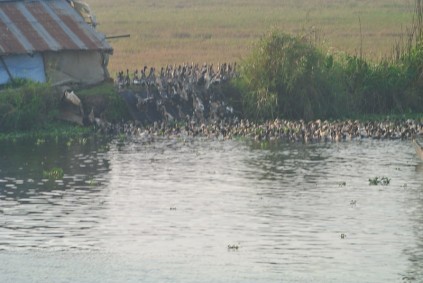 ← The Elephants went in two by two…
India Highlights! →