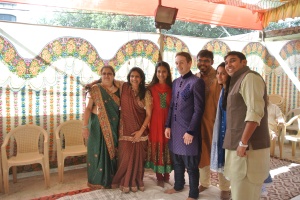 A Gujarati Wedding usually has several small ceremonies in the days leading up to the main “wedding day”. Neem and Ollie had opted for a truncated version but still there was plenty to be a part of.

A pop-up tent and area had been put together on the apartment rooftop for the occasion.

Thursday started with Ganspathy Sthapon, signalling the start of the wedding celebrations. This was a small family celebration before we arrived.
The priest invoked Ganesh, the god who removes difficulties. He is called upon before undertaking any new venture including marriage. 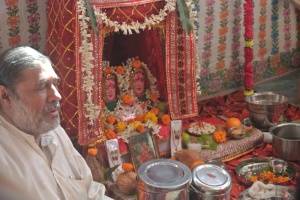 The Mehendi ceremony was next, this lays the foundations for the main ceremony of marriage. 5 goddesses are invoked to bless the couple.

Surya, the sun god – the life giver has 2 wives which are called upon to give energy, light and continuing generations. This ceremony was fascinating and Karen, the Irish and American girls were asked to be involved. They made up the 14 girls who are considered a source of energy.
We had our right toe washed by Neem’s mum and rice placed on our toe, plus a bindi each. Next was to share our food with Neem, a cake and rice pudding- we had to eat all of it! This was a struggle for many of us. Lots of water was consumed quickly afterwards. We were given lovely bags with a betel but, bindi, bangle and money.

This was followed by singing hymns, wedding songs and lots of Bollywood style dancing.

So much fun, the Indians can really bust the moves.

The dancing worked up an appetite so afterwards we were served a huge lunch of local food- yum.

Bellies full it was time for the henna painting, our biggest decision was to have either a full or half hand done.  Since We had no job to go back to Karen went for the full works. 2 full hands. This was all done via free hand through a little pipping cone. Not to be out done John and Joey had to request Henna was applied too. 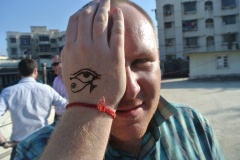 Not sure what this is but he looks delighted!

The Main Event we had all been waiting for was next…covering the bride and groom in turmeric paste. The Haldi Ceremony is to apply protection to the new couple and bestow blessings of good will. Poor Ollie took a beating from the lads. John managed to draw blood from a well timed southpaw jab but no one noticed til later as Ollie was covered in a riot of colour. 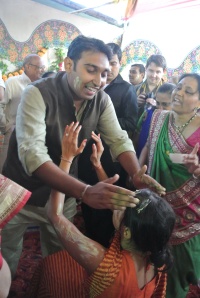 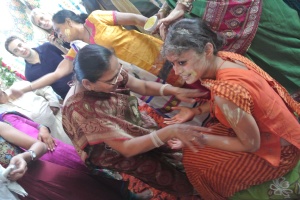 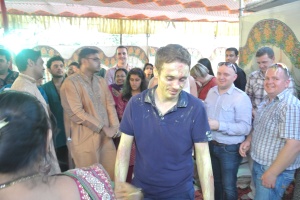 An amazing day followed by a cocktail party in Bora Bora. Never give the Irish and Indians a free bar…carnage… Limboing
under drinking straws.