As alluded to in our previous post Pink City – Jaipur is known as the ‘pink city’. Most of the major cities in Rajasthan are associated with one hue or another and there is always a ‘colourful’ story to go with it.

The city was painted pink to celebrate the visit of King Edward VII of the Britons in 1876. Pink being the traditional regal colour and is also associated with hospitality. Our only hope was that after our shenanigans it would be painted red!

The Ace Hotel promised us a “Royal Stay” but that was only true if we were the King and Queen of Dirtville. Oh well you cannot win them all.

We headed around the corner and after dodging some wandering bovine (see below) we settled into the rooftop lounge of the Ozone Restaurant for some nice Thali dinner.

The next day we had the half day tour lined up. If you are ever in Jaipur, the Tourist Office on Platform 1 of the Train Station is highly recommended. They book tours, taxis and are very knowledgeable. There were 11 of us on the tour and we soon became friends with Patrick, a teacher from Seoul, Korea. Transportation around the city was in an old military-style truck and our first stop was the Jantar Mantar ( Observatory).

The Observatory was unique in that it is completely out in the open. All the Instruments are large, elaborate andlook amazing and form part of a large garden combined with a number of sculptures. In 2010 was named as a UNESCO World Heritage Site.

The ‘Jantar Mantar’ itself is actually one of five that was built by Maharaja Jai Singh II of Jaipur but it is the largest of its brethren. It is also highly accurate being able to tell time to within half a second of accuracy.

After spending some time walking around the garden we crossed the road and entered the City Palace originally built by Jai Singh. 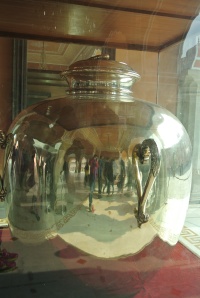 The palace was actually a complex of two palaces (Chandra Mahal and Mubarak Mahal) and a number of other buildings. It was quite large and the Chandra Mahal Palace is now a museum with an impressive array of weaponry. The  hall of public audience (Diwan-I-Khas) was also used to host Lord Mountbatten once. Unfortunately all photography inside is not permitted. (We would have to wait for our trip to Jodhpur to show you some of those weapons!).

We were taking some photos of the enourmous Sterling Silver water vessels when our tour guide shouted “Mobilise” and we scurried back to the van and onto our next stop.

Our next stop was the famous Amer Fort in the hills outside Jaipur. On our way we stopped outside two other landmarks, the Hawa Mahal, or ‘Palace of the Winds’, and the “Government Approved” Textile shop.
The former was a magnificent pink sandstone honeycombed hive that was constructed to enable ladies of the royal household to ‘snoop’ on the goings on in the city below. I bet they gossiped as well! The latter was the usual ducking and dodging of the amazing deals to be had and although Karen tried very hard to land me in it by saying that it was I who had all the money there was to be no sale for these gentlemen today.

The Amer Fort was, to overuse the word, amazing. The views to be had from the ramparts were breathtaking and the size of the and layout of the concubines quarters left little to be imagined. The Maharajah had over 30 wives and concubines and the unique layout meant he could visit each one without the others knowing. (A bit like George Lazenby in that Health Spa run by Blofeld in On Her Majesty’s Secret Service).

Spying on the concubines!

We finished the day taking in the sights of Jaipurs rooftops by starlight from the dizzying heights of the Nahargarh or Tigers Fort. (Please note this is called Tigers Fort as it was used as a hunting lodge rather than being made up of Tigers!)

An action packed day in the Pink City but an eye opener to North Indian history and culture.

Tomorrow we would head further east, but still in Rajesthan, to Jodhpur – The Blue City.