Our 1st experience of Indian trains was upon us..we were on the 11.40am train from Delhi to Jaipur on coach a1.The fun started as we arrived at the station and couldn’t find our train name or number on the boards. After asking several people we were told it was platform 5. The train was delayed by 35 mins so we went to the waiting area- more pleasant experience than expected.

On platform 5 we stood packed like horses-back pack on back and small day bag on front. With our money belts on and wits about us trying to work out where we should be standing all coach signs started with ‘s’ but our coach was ‘a1’. I jumped every time someone walked past me or touched my bag. We met an Italian couple who had just landed and this was there 1st time too. Circumstances had thrown us together.

The train pulled into the station 1hr late – very prompt for Indian trains ( we would discover). There were people jumping off and on all over the place – a right commotion. We spotted a painted sign on the train ‘a1’ so we scarpered along the platform and jumped on, now to find our seats…in fact they were berths. John had a berth in the aisle while I was diagonal across in a bunk of 4 alongside another family of 3. Since we were both a bit unsure we piled into my berth part of the bank of 4 so we could sit together.

What’s behind the curtains?

It wasn’t long before we felt at home,talking to our new friends. The little girl was very keen to take our photos and feed us sweets. While she sang and practiced her English I took a nap on the other berth John helped her with her homework. He was rewarded with Indian tea from the family.

Masala Tea (or Chai Garam) is a mixture of cloves, cardamom pods and cinnamon crushed together and fused with ginger and pepper before being boiled in hot water and then added to milk and sugar. or use a coffee grinder. Its quite nice.
The trains are surprisingly comfortable and you are given a brown package with pillow, 2 sheets and blanket but it can be difficult to sleep on the train as men are constantly selling this tea, not to mention the soup and roti, constant chants of ‘chai chai’, ‘tomato soup and roti’.

All was going well until I needed the loo…it literally was a funnel on to the track. Thank goodness for squat practice, immodium, wet wipes, toilet roll and hand sanitiser! 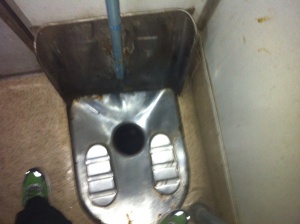 After several hours we realised we had no idea where we were, there are no announcements at stops and barely a sign. We relayed on locals to tell us when we were finally in Jaipur. Lesson learnt: know how many stops from departure to arrival!! That could have been interesting.

We arrived off the 14283 Train with high spirits however as we had arrived in the pink city -Jaipur!!

The last piece of India’s Golden Triangle – Agra, Delhi and Jaipur. The station itself is interesting as it has acted as a major junction for the whole Northwestern Train Division since it opened in 1895.

On the train there was an intense study of Lonely Planet Guide  to create our target list. To action it we headed to the tourist office on platform 1 for a map, book a 1/2 day tour of the major attractions – the Hawa Mahal, Amber Fort and Pink City itself.