Tales of the Gold Coast

In this edition of the blog I bring you a tale of adventure, exploration and discovery. Between the metropolis of Brisbane and the New South Wales Border to the south is another city, a hidden city. To the casual observer this area looks like any other, coastal region, miles of beaches punctuated by a little town here or there, a hinterland nearby covered in forests.

But look a little closer and you realise it is a city, the towns districts, the beach the main thoroughfare.

I am of course referring to the Gold Coast City. 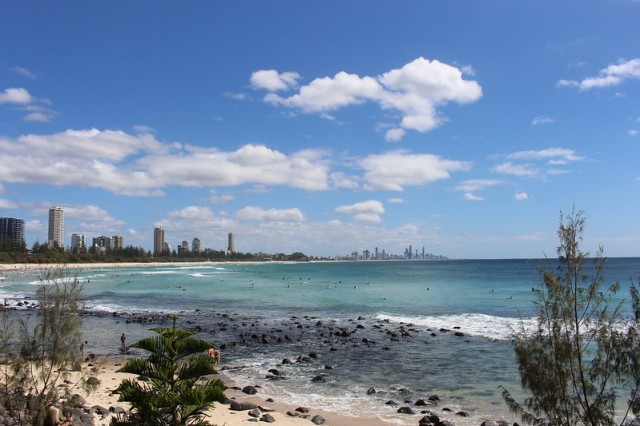 But it wasn’t always called this. The indigenous tribes of the Yugambeh people called it Kurrungal – referring to the endless supply of hardwood for boomerangs (there are lots of red cedar trees in the hinterland).

Once the Europeans settled the area, for the same access to those red cedar forests the area became known as the South Coast, being South of Brisbane. This it remained until around the 1950s until a series of events led to its last and most iconic name.

In 1885, the then Queensland Governor Musgrave built a summer palace around the area of Southport. Over time this region began to become a resort for the wealthy members of Brisbane society.  A railway line in 1889 and better road links between Brisbane and Southport in 1925 really opened up the area to tourism with some entrepreneurs seeing the wind change and opening up hotels -> chief among them was Jim Cavill who created the Surfers Paradise hotel.

The advent of motor car ownership on a mass scale and the use of the area as an ‘R n R’ location for US Servicemen during World War 2 kept the local economy ticking over until its boom in the 1950s.

. They say that ‘there’s gold in them there hills’ – well there is also gold on the beaches  and the rise in residential prices, services and possibilities in the 1950s led to the renaming of the entire region as ‘The Gold Coast’

With a lot of areas to choose to stay along its 35 mile long beach we opted for the town of Burleigh Heads. It seemed to have the right mixture of stuff to do and quietness that we crave. It would be a lot less more enjoyable than the Sin City of Surfers to the north.

Best Beach on the Coast?

According to some sources Burleigh Heads has the best beach on the entire coast. They are not wrong. Sloping around to the south, the Headland itself affords amazing views back up the coastline to the high rises of the north. Pick a certain angle for your photo and its looks like there is an ocean between you and civilisation.

Its also a very pretty beach; white sand and a manicured shoreline lined with over 450 Norfolk Pine trees and then rows of apartment buildings behind that. It feels a lot like Manly in Sydney.

This would be our base of operations, morning walks, afternoon swims and sunset picnics. The Burleigh Heads National Park had an really great coastal walking route and lookouts. 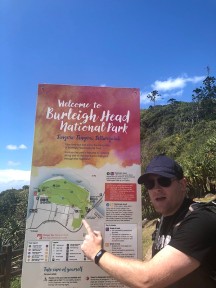 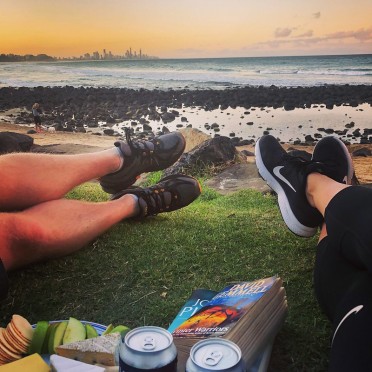 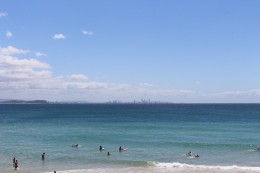 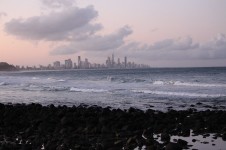 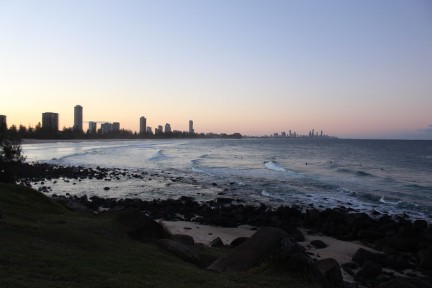 But Burleigh isn’t all about the beach. It has a world class brewery too in the Burleigh Brewing Company.

We had spent a few days sampling their beer brands across the area (our favourite is Big Head Pale Ale) that when we found out they had a Taphouse we headed there instantly. Located near the M1 interchange in an industrial park this place was awesome. Cool beer on tap, funky interior and live music. Everything we needed! 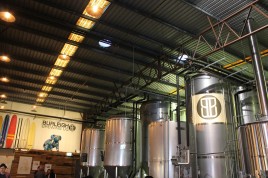 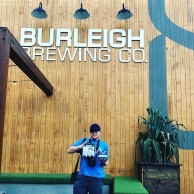 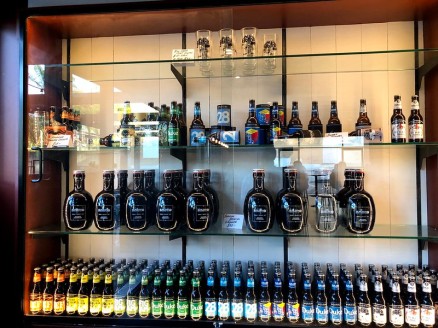 “Welcome to Miami, Bienvenido a Miami”

(Admit it – you started singing that song!)

As I said in my introduction, the Gold Coast is a collection of towns and areas. The one directly north of us was called Miami Beach.  It is separated from Burleigh by a little hill called Nobby Hill and is named after the hotel that was situated here – Miami Hotel and the ‘Miami Shores’ development of bungalows in possibly a nod to the other Miami in Florida, USA that was slowly becoming the Magic City through expansive development at the same time.

One of the big draws in Miami is its Street Food Night Market at Miami Marketta.

Similar to those in Darwin or Brisbane, these markets are a bohemian collection of food stalls, market vendors, live music and pop-up bars. Evoking a sense of Khao San Road in Bangkok (you know before it got crap!) we had a great evening sampling food from all over the globe. 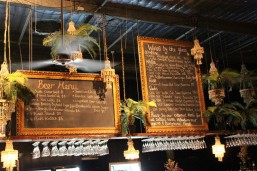 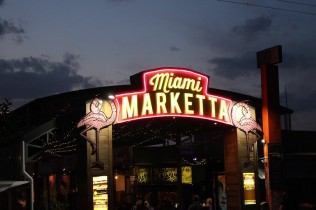 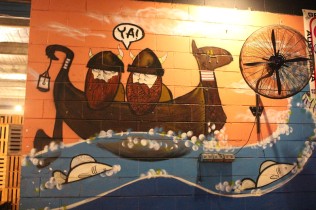 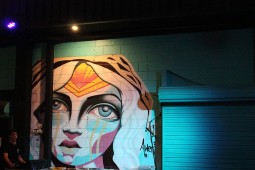 With 35 miles of beaches and coastline it is quite easy to pass the time up here. We strolled up past Miami Beach to the next one along the way – Mermaid Beach. Named after the Royal Navy cutter HMS Mermaid it is nestled between the much busier Miami Beach and Broadbeach to the North its a small and quiet strip of sand.

It is also the location of a famous victory for John over Karen. The choice of duel was a few rounds of crazy golf at the Putt Putt Golf Club. 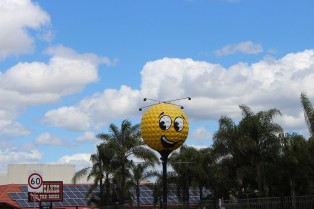 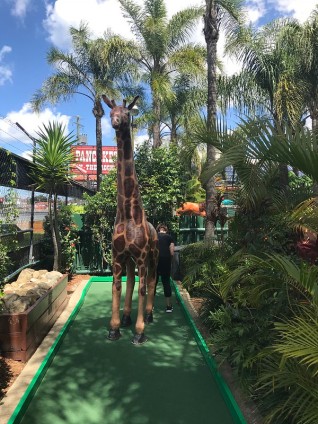 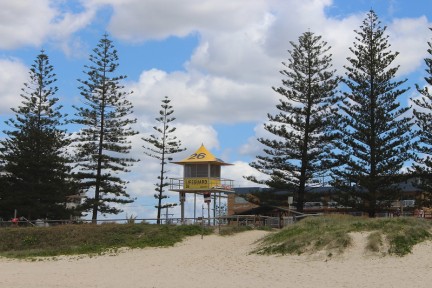 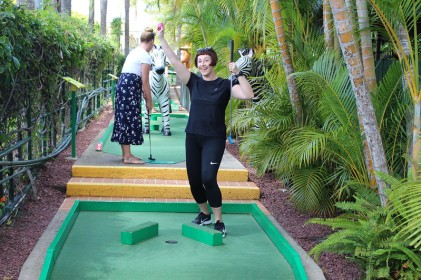 The Gold Coast Airport in Coolangatta is actually situated in both Queensland and New South Wales – the border actually runs right through the runway. On the Queensland side the area is called Coolangattta (named after the schooner Coolangatta) and on the New South Wales side it is called Tweed Heads. Tough work for the post office I bet, although you can celebrate New Years Eve twice in one night by crossing the road quickly 🙂

Where this border ends on land is a place called Point Danger.  It was named as such by Captain James Cook on his voyages in the area as it marked the beginning of dangerous coral reefs for ships.

The lookout point has a memorial to Cook, made in cast iron from the Endeavour shipwreck itself, plaques commemorating Australian mariners and a border line. It also had an amazing picnic spot and electric barbecues. 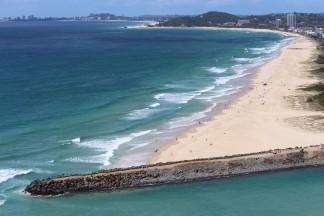 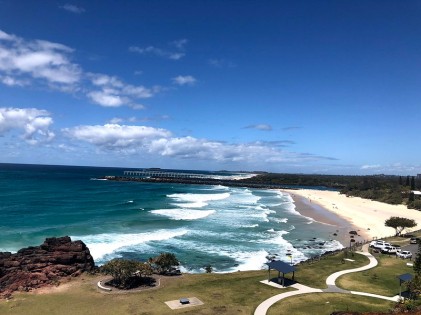 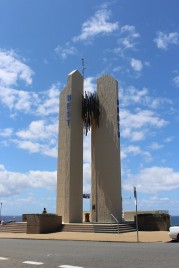 They say on a very clear day you can see both the Sunshine Coast and Byron Bay from up here. We were more concerned with spotting some whales. Point Danger is a key point on the ‘humpback highway’ and since it was October they would be on their southward migration with their newly birthed calf’s and swimming closer to the shoreline for protection from predators.

Luckily we managed to see a couple of tails and spray from the top of the humpback whales. 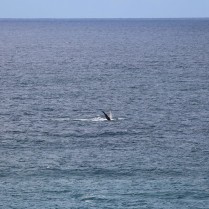 Karen had been on the Urban List website and found a pretty funky Day Spa in West Burleigh. Greenhouse the Bathhouse is a boutique spa built out of repurposed shipping containers.

It feels like a Turkish or Moroccan bathhouse from the decor and layout and was a great way to relax before boarding a plane – the airport is only 10 mins drive from here. And to wake you up there was a plunge pool that was freezing!

Its located next to the shores of Tallebudgera Creek which looked awesome for a kayak in -> next time!! 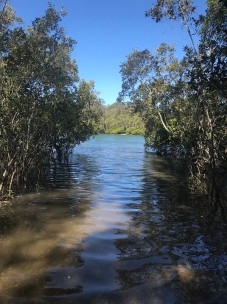 With a little bit more time on our hands we headed to another stretch of beach for a final stroll and noisy around.

Currumbin Beach has a peculiar rock feature in the middle of it. Years of erosion have left a few sentinels of volcanic rock standing while the silt and sandstone surrounding it has washed away. One of the more prominent of these rocks is called Elephant Rock as it resembles one of those magnificent specimens; sitting on the beach and keeping a watch on the sea.

A small walkway to the top afforded us some fantastic views. Next to the rock is the Currumbin Beach Surf Life club. In fact it is attached to the Rock like a mollusc would be to a ship. Starting out as a small shack back in 1919 it now has some decent digs and a bistro with unbeatable views.  It got it’s name of the ‘Vikings’ when it began an affiliation with the Ipswich Vikings swim club in the 1930s.

As the sunset on that day it also set on our long Long Weekend up in the Gold Coast. It was straight to the airport and the Wednesday night flight back to Sydney and work the next day 😦