Japan Part 5: We are not in Nara anymore..Kyoto!

Located in the  southern suburbs of Kyoto this motley collection of shrines, temples and rest-houses is quite impressive. What blows you away is are the vermilion torii. Thousands of these gates mark the pathways inside the complex. Sweeping up and down slopes and crests in all directions while winding their way up Mount Inari A wondrous sight.

Each of the gates has been donated by Japanese businesses or families in the hope of receiving good luck or fortune from the god of prosperity and patron of merchants – Fushimi Inari Taisha. (who is also the god of rice, sake, business and manufacturing). On the back of each gate is the donor’s name in black ink.

We jumped off the train and dropped our bags at our guesthouse before walking the short distance back to the Fushimi Inari Shrine. Our first item on the Kyoto hitlist.

The shrine complex is over 1300 years old and is first dated back to 711. At the front is a large romon tower that acts as the shrine gateway. This was built in 1589 thanks to generous donations from the samurai warlord and then ruler of Japan, Toyotomi Hideyoshi. (He also built Osaka Castle).

There are a number of Fox statues in the complex, kitsune in Japanese. Even the traditional roles of guardian lions and dogs in front of temples have been replaced by these foxes. Like their counterparts the deer, they are also regarded as messengers of the gods and are revered. But they are also feared.

Japanese folklore depicts the kitsune as possessing both intelligence, cunning and magical powers allowing them to shape-shift into men and women. It is said that the more tails a fox has the more power it has and the number normally associated with those tales is nine. 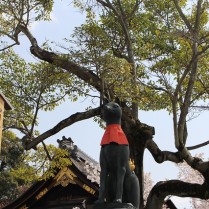 Near the top of the mount we stopped for ramen in a traditional tea hut style restaurant. Shoes off and cushions and low tables. We had worked up an appetite and quickly devoured our noodles.

After an afternoon of delicious temples (and ramen) it was time to head into Kyoto city itself and head to the amazing Nishiki Market.  We took the Kiehan Main Line north a couple of stops north to Gion-Siojo and then strolled across a bridge spanning the Kamo river to the Nakagyo-ku district.

Unlike European markets based in a square or rectangle shape the Nishiki Market is spread out like a snake – down a single alleyway across 5 city blocks. A single street north of Shijo Avenue.

It is described as “Kyoto’s Kitchen” with over 100 stalls and restaurants competing for your attention, and your Yen! For over 700 years (the first stall dates to 1310) the market has fed the population of Kyoto. Starting as a purely fish market before steadily introducing retail elements. The nearby district is full of shopping malls and department stores.

Everything from sushi to pickled octopi, kitchen knives to tea pots are for sale.

It was helluva busy. (Imagine a whole bunch of salmon swimming upstream at once).We made our way down one side (East to West) before heading back down again to check out the other side of the aisle. Navigating the flow of people and ducking in and out to get a close-up photo or try out some skewers of meat and fish.

On the eastern side of the market is a small shrine – Nishiki Tenman-gu Shrine. Its location marks the exact center of Kyoto (although it was built somewhere else and moved there by Toyotomi Hideyoshi!). Inside the shrine is a well where the Nishiki waters bubble up from. This stream helps cool the stalls in the alleyway and is one of the reasons a fish market was set-up in the first place.

After exploring the market we looped back across the river to the Gion District. Originally this tract of teahouses and accomodation was built to support the many pilgrims to the nearby shrines but then evolved into one of the best known and exclusive geisha districts in all of Japan. The local government has recognised the cultural significance of this area so a few years early embarked on a huge renovation to bring it back to what it would have looked like back in the day.

The main place to take in the traditional arts is at Gion Corner and it’s Yasaka Hall but as we wanted to explore more of the area on foot we declined a concert that was just starting. We did get to check out the temporary exhibition in the plaza outside however – art from Naoshima Island. One of Yayoi Kusama’s pumpkin sculptures was on display. 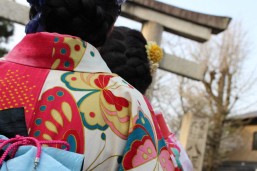 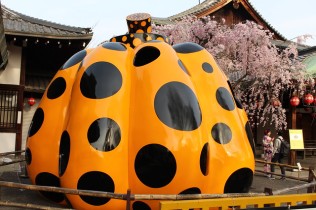 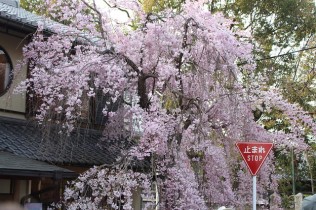 From there we meandered up to the Yasaka Jinja Shrine. One of the most important shrines in Japanese culture this shinto shrine had a stage, main hall and large gardens full of sakura trees.

The nearby temple of Kodal-ji had a buddhist zen garden so we headed there next. It also had an amazing exhibition of traditional japanese calligraphy art.. but with a modern Manga twist. Artists Katsuya Terada (Blood:The Last Vampire, Iron Man, Hellboy) and Baron Yoshimoto (The Troublemakers). 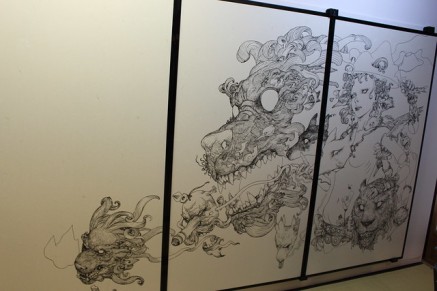 The temple is part of the Rinzai School of Zen Buddhism and its gardens are deemed a cultural icon and place of natural beauty in Japan. The gravel garden in particular was absolutely stunning. 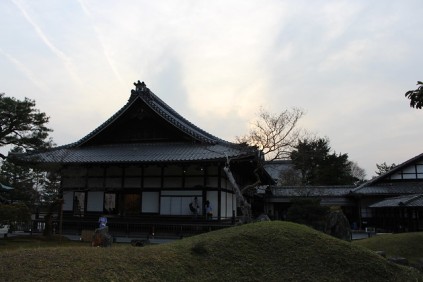 With the daylight fading fast and time running out would we have time to fit in yet another temple today?

Looking at Karen with folded hands and a scowl on her face. The answer was a definitive no!

So we re-traced our steps back to the Yasaka Shrine and the markets that were there for some food, and a can or two of Asahi under the Sakura trees and the stars.

What a crazy first day. We woke up in Nara and ended the day with dumplings in a market in the Gion quarter of Kyoto.

← Japan Part 4: Chronicles Of Nara
Japan Part 6: All that Glitters is not Gold! →