It took us three years to realise that we had not paid Australia’s ‘third city’ a visit. Karen had passed through Brisbane back in ’06 during her gap year and I guess we just put it on the long finger.

So 3 years had just past since we arrived on these Southern shores and with Karen’s cousin Clare spending a semester at University of Queensland it felt like the right time to pop up to Queensland and pay a visit.

We had a bit of a low key Friday night. Flying in after work we made it to Queen Street and our hotel – Next Hotel in North Quay. It was in a great location so we went for a stroll and found a nearby Korean restaurant for dinner.

The main local attraction is the impressive Italian Renaissance architecture of the Former Treasury Building which lights up at night. 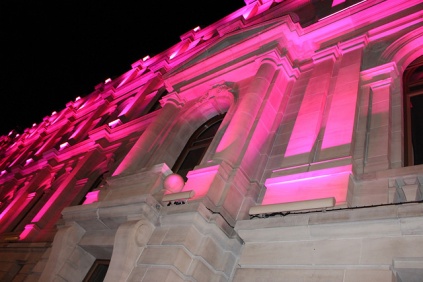 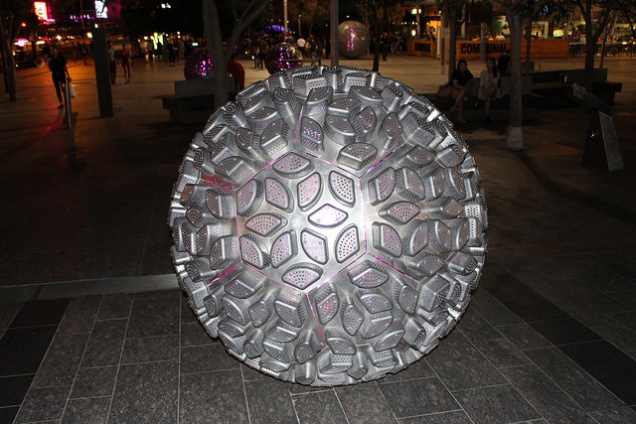 We woke up that Saturday morning to some pretty decent weather. Dry and not too cold so perfect for exploring. The area of the city we were staying in was settled originally by the Jagera people before colonial settlement in 1825. This was the second site chosen after Redcliffe (on the coast to the north)was abandoned due to lack of a suitable water source. Previously it was called Mian-jin ‘place shaped as spike’ before being named after the then Governor of New South Wales – Sir Thomas Brisbane.

We met up with Clare and walked over the Victoria Bridge (one of fifteen that cross the river) and into the West End. We walked along the tree-lined boulevard of Melbourne Street until we reached The Gunshop Cafe for breakfast. There was a motley collection of other restaurants, bars, street art and Messina Ice Cream so we would definitely be back over the course of the weekend. 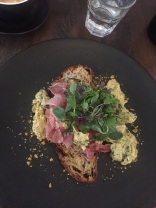 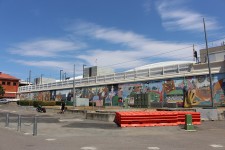 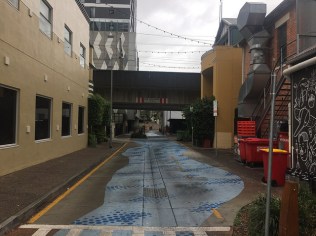 Similar to London (UK) or Budapest (Hungary), Brisbane is a river city and it’s geography is dictated by the Brisbane River. Rising from it’s source in Mount Stanley, the 344km long river is in it’s meandering phase when it hits the city creating an interesting geography beginning with the South Bank Parklands. 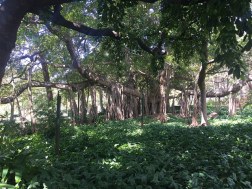 This mixture of rainforest, water and plazas encompasses part of the World Expo ’88 Site and contains a number of important landmarks – The Wheel of Brisbane, Nepal Peace Pagoda and the Queensland Conservatorium.

We spent the afternoon strolling along the South Bank and up to the Goodwill Bridge. This pedestrian/cyclist bridge was opened in 2001 on the occasion that Brisbane held the final edition of The Goodwill Games. Crossing the bridge we continued onto the City Botanic Gardens. Like the one in Sydney, the Botanic Gardens were originally farmlands created to feed the burgeoning colony only to be later converted into pleasure gardens by the Victorian era. 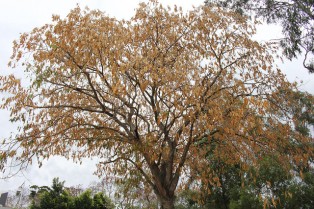 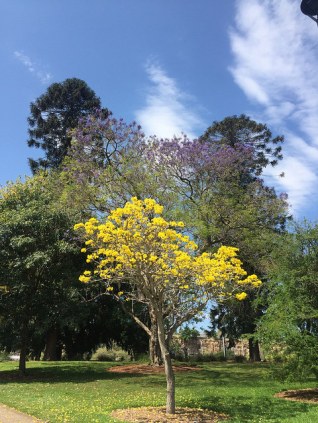 All that walking in the sunshine was hard walk so we completed the square journey and pottered back to the hotel and enjoyed a dip in the pool. Since it was Clare’s birthday we also had occasion to have some cake 🙂 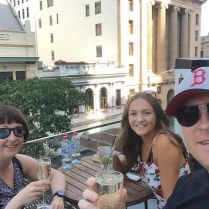 Saturday night in Brisbane can be summed up in 3 words – ‘Eat Street Markets’.

Located in the district of Hamilton (it had to be!), this hive of shipping containers and tents is home to some of the best food to be had in town all eaten to the beat of live music and blazoned in neon light. Part of the fun would be getting there as we took the ferry down river, the sun setting behind us as we meandered past the Story Bridge, New Farm and the Brisbane Powerhouse. As we neared the markets we could make out the multi-coloured containers, like some lego city in the distance.

The atmosphere was as electric as some of the stall signs as it was also the last night of the annual Brisbane Festival. As soon as we entered the place was buzzing. 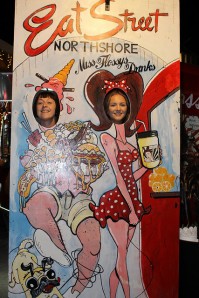 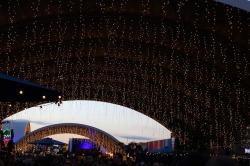 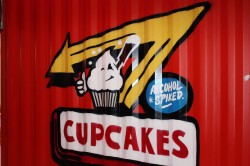 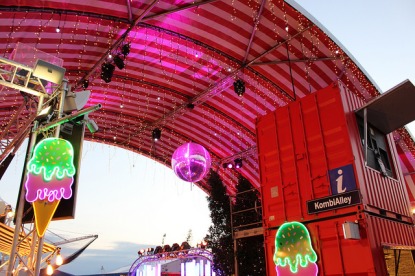 After grabbing food from some of the 180 dining options available we joined the throngs of people moving to the waterside to check out the fireworks display, the last hurrah of the festival. After that we took in some lounge jazz music at the Laneway Stage before finishing the night with a big ol ice-cream from Byron Bay’s Baylato Stand  and a glimpse of Indiana Jones and the Raiders of the Lost Ark on the OpenSky Theatre. 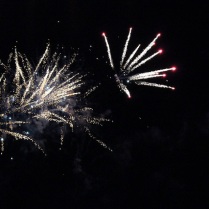 Special mentions go out to the hilarious couple – she would just pose all night around the markets – some sort of art project fashion shoot? Also one of the bands. A mixture of Hanson and The Osmonds they really worked hard for the crowd’s adulation with high tempo songs.

A great night out in Brisbane and plans to visit the Lone Pine Koala Sanctuary on the cards for tomorrow.