Sculptures by the Sea Part 3: Revenge of the Silt

Had he been born a few centuries later,  Johnson’s quote could equally be attributable to the city of Sydney. With another October (our third here) looming we were certainly not tired of life or Sydney and we geared ourselves up for the main October event.

But hark, what do I hear coming over the horizon. A storm. A large storm that would threaten our ability to take in a little slice of culture while we walked along the shore and would allow the waves to play a larger part in this play.

But not to be deterred we dusted off our camera, slapped on some sun cream and roped our friend (and eminent Art Critic)  Adam into going  east and checking out the show.

Once more unto the beach

We had our plan – get to Tamarama Beach early and beat the crowds. All that was left was to play the waiting game and get some good unobstructed shots. Elbows and stern voices ready… 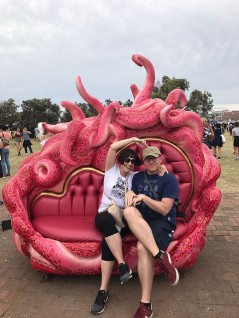 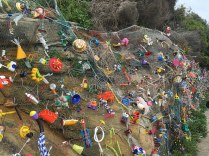 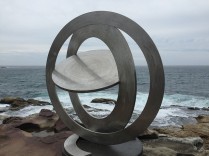 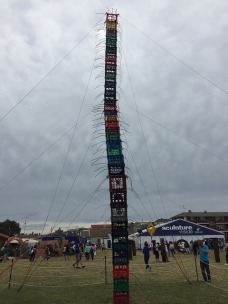 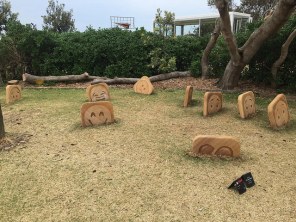 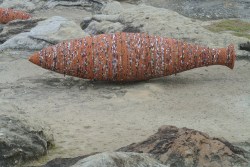 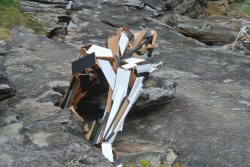 With hundreds of pieces of art on display all with different nuances of taste and abstraction  it is always tough to place one above the other. That said we would like to point out some of our favorites. 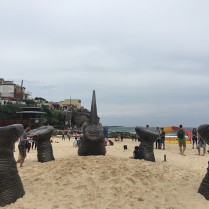 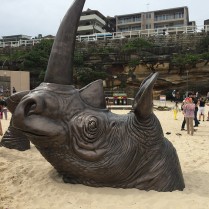 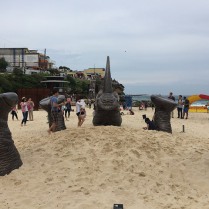 You may recognise the names of these two Bondi local artists as they are the creative geniuses behind Dogman and Rabbitgirl. This giant sculpture is bittersweet,  invoking the dual emotions of beauty and vulnerability. It is estimated that 1 Rhino is killed every 6 hours. That means that would be one less Rhino by the time we finished visiting the exhibition that day.  The good news is that this sculpture was commissioned alongside the Australian Rhino Project and that as well as awareness, a lot of money has been raised to help with that charity’s great work. 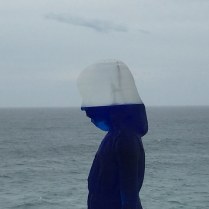 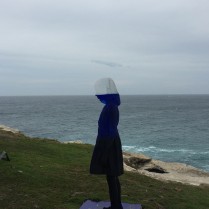 It took a more than a few attempts to try and line up these shots. Between the contours of the sea and the jostling of position amongst the other photographers. Rossi, a resident artist in Fremantle WA, used 3D printing technology to create this stunning piece.  It has been used as a metaphor for how modern technology in the ‘Digital Age’ has led to a draining or discoloration of emotion. It also provides a strong statement  against coral bleaching, a problem that Australia is struggling to come to terms with.

Beyond that it just looks great. The multitude of tones allows one to have a completely different perspective from every other direction. 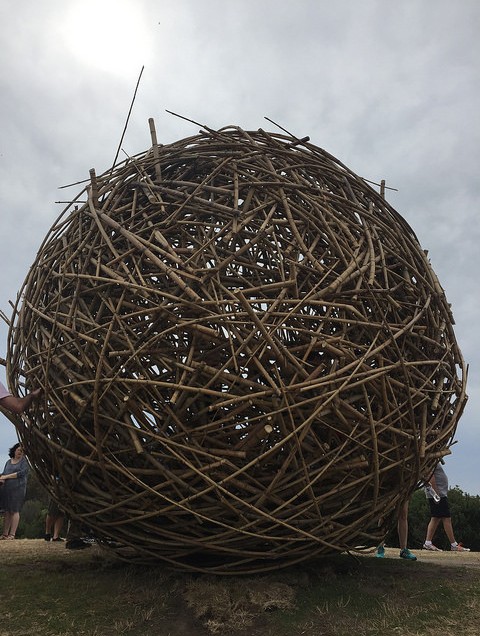 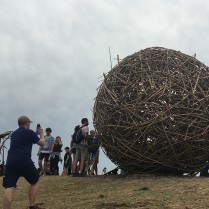 The Golden Hour by Cave Urban

A quick google search dispelled the notion that this is Karl Urban’s funnily named brother. It is in fact the name of a Sydney based studio that investigate lightweight structures and their relevance to contemporary design.

Constructed with over 600 poles of locally harvested bamboo this spehere was aligned perfectly against the horizon to celebrate those special times of the day when the daylight is redder and softer.

Did I mention that it also looks like the boulder from Raiders of the Lost Ark? Well it does.

You know when you hear that a show is ‘Off Broadway’ and it gets you excited? Well how about an art installation that is ‘Off Sculptures by the Sea’, that’s worth checking out right?

Away from the hustle and bustle of the Eastern Suburbs and parked on the manicured lawns of the Hickson Park Reserve there were 22 peculiar kangaroos. Made entirely of corrugated steel by artist Louis Pratt they certainly were a sight to behold and the best thing was that they were not camera shy. 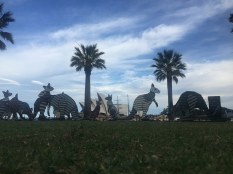 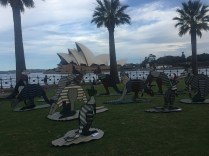