The Port of King Arthur

On our last full day in Tasmania we took a drive to the nearby Port Arthur World Heritage Site.

Located on the Tasman peninsula it was a topsy turvy drive down the peninsula and we did it on the last bar of petrol – content that we would have enough to make it back to Sorell on the way back for a top-up. We were being a little brazen as we had pre-paid for the first tank of fuel in the van so it was in our interest to return it as empty as possible.

We arrived at Port Arthur and after having breakfast in the car park made our way into the visitor centre to begin a day of discovery.

From 1833 some of the most hardened of previously convicted British criminals (and probably a few innocent souls too) were sent to Port Arthur – one of harshest and least desirable penal colonies in existence. It was deemed to be inescapable and, to a certain degree it was. Surrounded on 3 sides by water it’s connection to the main Tasmanian Island was via Eaglehawk Neck – a narrow neck of land guarded by British Soldiers and a lot of hungry hounds which ended up catching most of the escapees. A few managed to bypass this line of dogs but even fewer remained at large for long. A notable exception would be Martin Cash who managed to escape twice!

When you enter the centre you are each given a personalised playing card. Each card is matched to a prisoner and your task is to find the same motif that is one the card within the interactive centre to discover who your prisoner is and then to find out their story. Of all the cards to give John this one was the most perfect…

William Collins: He likes his clothes!

With your prisoner found you are then invited to discover what job they did in the prison and how they managed – as well as all the other jobs and lots of information about the jailors themselves. 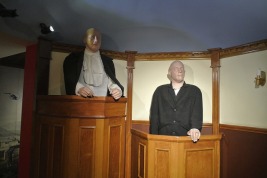 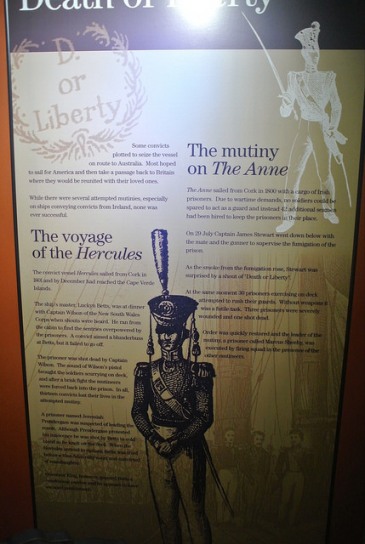 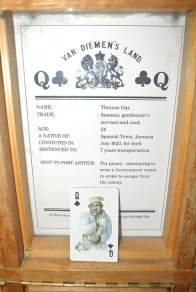 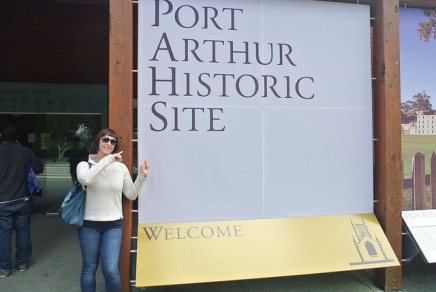 As part of your entrance fee you get a place on a cruise of the bay and a walking tour around the grounds. First up was the cruise. It was such a lovely day for it.The skipper (Peter?) was very knowledgeable and filled us in on the history of the penal colony and its roots with the sea. The government wanted Port Arthur to become self sufficient as it’s remoteness drove up costs everywhere. To that end this was definitely a working prison with workshops and industries aplenty. The main business for the prisoners became shipbuilding and repairing vessels. With all the forests nearby there was plenty of raw materials and in two years the first convict ship had been built and named – the Eliza.

It was this industry that led to a number of escape attempts by sea. Already making tools and constructing boats – some prisoners used this to their own end and a second, albeit secret, shipbuilding industry began in earnest. Scipio Africanus, an African Bushman, drowned off Tasman Island while escaping with a companion in a home-made canoe. Francis Jones and Robert Birch were two convict overseers at Point Puer. On 19 December 1836, the day after they
absconded, their raft washed back on shore, followed by the paddles. There was no trace of the two men until 7 January when the body of Robert Birch was discovered floating in the water. The body of Francis Jones was never recovered.

In the center of the harbour is a small island that is dotted with headstones – this is the colony’s graveyard and is known by the rather grim moniker as The Isle Of The Dead. There was an option to jump off but we had an agenda to stick to. There is also a night time ghost walking tour amongst the graves but Karen was too scared to sign up for it. Making our way back into the harbour we were told of a rather unique escape attempt that didn’t work out for unexpected reasons…

George “Billy” Hunt, disguised himself using a kangaroo hide and tried to flee across Eaglehawk Neck, but the half-starved guards on duty tried to shoot him to supplement their meagre rations. When he noticed them sighting him up, Hunt threw off his disguise and surrendered, receiving 150 lashes.

Back on dry land we were just in time for our walking tour with a lady called Tammy (Which was ironic as she looked a lot like Melissa McCarthy!). Tammy spent the next hour telling us the many stories and tales contained within the colony whilst she walked us around the grounds. The tour was more an assist for the rest of our visit and after describing much of the complex we opted to go to the Separate Prison – Port Arthur’s experiment with replacing the lash with psychological punishment. They also had a canteen and we were famished!

Capsicum = Pepper for all our non Australian readers!

The Separate Prison was built between 1853 and 1855. The main punishment and reward system involved food and silence. If prisoners misbehaved they were given bare minimum bread and water and the entire prison operated under a silence system where prisoners had to wear hoods and were not allowed to speak. It is no wonder that many of them developed mental illnesses due to the lack of light or sound.It is no coincidence that the Asylum was located right next door. 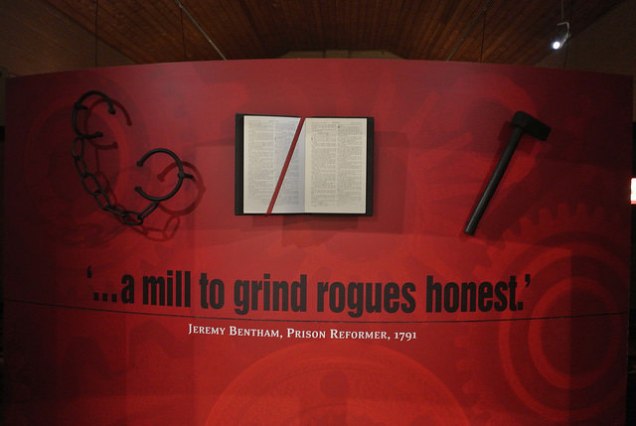 The chapel within the Separate Prison used an interesting set of doors to silo off the prisoners so that they were separate even at service.

With the sun really starting to beat down we broke out of the prison building and headed up the hill to where the military and civilian staff would have lived. Between 1830 and 1863 the British Army had troops stationed at Port Arthur. They were later withdrawn for fighting in nearby New Zealand. In total 9 Regiments took turns guarding the colony – this included a watch by the North Scot Fusiliers. They were billeted on the hill next to the hospital wing granting both a commanding view of the complex and an escape from the noxious miasma generated by the industries below.

Next to the Barracks was an old cottage – built to house one of Port Arthur’s more famous prisoners – Irish politician William Smith O’Brien. You maybe wondering how a member of the British Parliament ended up here – it was to do with his other occupation. As leader of the Young Irish movement he played a critical part in the disastrous Young Irelander Rebellion of 1848 and as a consequence was tried with sedition and sent to van Diemen’s Land. He had been sent to Maria Island but was caught after a failed escape attempt and then sent to Port Arthur.

While the most famous he was not the only Political Prisoner here and they collectively became known as The Exiles.

We spent the last bit of our time walking through the ruined husk of the old main prison wing and then up through the Government Gardens to the old church – built by the convicts for the convicts. As Port Arthur had prisoner’s of many denominations the church was never consecrated. A huge fire ripped through the building in 1884 so it has no roof or windows.

Normally we wrap up a blog post with a paragraph saying how much we enjoyed our visit and how great the place was (which we certainly did and it certainly was!) but it was not to be the end of that day’s adventure. You remember how we were confident that our last bar of petrol would get us back to Sorell? As we pulled out of the car park it disappeared and the warning sign came on. We were potentially in a lot of trouble. Did we have enough of our unknown quantities of fuel left for the 36km up and down trip to the nearest petrol station?

← Island of Maria
Tears In Rain… →