The Glass is half full!

Sydney: January 13th ===================== Sat on our couch, tea cups half full, we poured over the travel guides and Lonely Planet:Tasmania in search of some last minute ‘big ticket’ items to add to our itinerary. As Karen skimmed through the book it opened on the section for Coles Bay on the east coast. As we read further we got excited… Bicheno: January 24th ===================== The sun was pouring through the gaps in the curtains on this fine morning and the last echoes of a dream were leaving our imaginations – something to do with Penguins no doubt! Today was going to be a great day for JKRoaming – we would be exploring an amazing area of the world and hopefully get some really great photos. As Karen went to the shower block, John put the bed away and unplugged the electricity socket and got the van ready for road. After the relaxing drive down the highway it was time to turn onto a more local road for the last couple of miles to Coles Bay. This was made all the difficult by getting stuck behind a slow moving vehicle ahead of us. After twenty minutes we managed to get past him but only as part of swerv maneuver as it took the right-hand turn too slowly.

That wouldn’t be the end of the drama. As we drove into the national park we tested the mountain climbing abilities of the Toyota Hi-Ace to it’s maximum. In second gear and with her feet planted on the floor – Karen manouvered us to our destination at the uphill carpark. We almost didn’t make it up the hill! We parked the van and were greeted by a local Wallaby before we began our ascent up to Wineglass Bay Lookout. The climb was not too bad and we were rewarded with some amazing views on the way up. The real prize was at the top however with a stunning vista of the bay below. 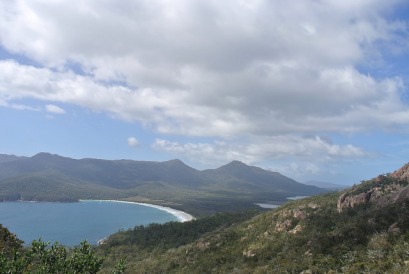 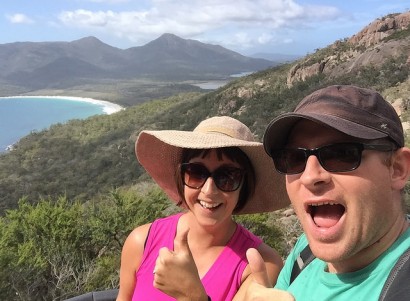 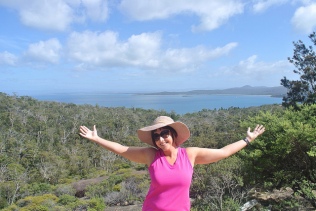 Voted as one of the top ten beaches in the world – Wineglass Bay was something special. We decided to do the extra trek down to walk along it’s sandy beach. This was about an hour of climbing down badly weather-worn rock steps and over tree stumps along a hint of a path. With the sun beating down on us it was hard going but we got there and enjoyed a picnic on the beach as reward for our troubles. 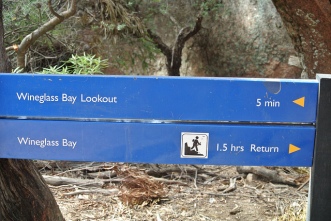 We sadly had to leave after a few hours as we would have a bit of a journey to get to our next destination. On the way we stopped in a small village called Swansea and got some supplies and grabbed a cup of tea in a local cafe next to a table of Scottish people (they are everywhere!) We also went to the local tourist office to get some postcards and got chatting to the lady behind the counter for what felt like forever. She hadn’t seen many people that day and had to divest her life story onto us.

Our campsite for the night was the very rustic Gumleaves Bush Campsite. Karen had to take the van ‘off-road’ to get us here and then had to get a log-fire lighting for the barbeque as John was apparently sick the day they thought that at the Scouts in Midleton. Sleep didn’t come easy as we were too preoccupied with not missing the boat the next morning to Maria Island.

← March of the Birthday Penguins!
Island of Maria →