So as you gathered from the last post the main attraction today would be… Dolphins!

We were up in Monkey Mia – part of Shark Bay, and this is where for 40 years, wild bottlenose dolphins have swum into the shallow waters in order to be fed and interact with humans. This is not some simple circus act but a carefully managed part of a wider Dolphin conservation effort in the region.

They are only fed a small portion of their daily food needs so as to not make them dependant on human food sources. Also only 5 random dolphin females are fed each day from those that arrive in the bay.

I think we saw about 20 dolphins throughout the session. Near the end of it the actual feeding begins and this is the fun part, as they are all fed from audience members. Before this a volunteer has to entice the pelicans away, as they steal the Dolphin’s fish from them.

John decided to wear his loud Pacman t-shirt. It’s so bright that it would not possibly fail to capture the attention of the centre’s staff. Like Charlie from the Roald Dahl classic, John watched on as the first 4 “golden tickets” (invites to feed the Dolphins) were handed out. With a few more children also looking on the odds were not in his favour.

Just then a pair of eyes came his way and the finger of destiny at him, before a very posh voice proclaimed..”You in the green t-shirt. Yes you, you have been chosen”

John ran down and managed to feed one of the mother dolphins – called Surprise. He was so quick that Karen nearly didn’t capture the moment on film. 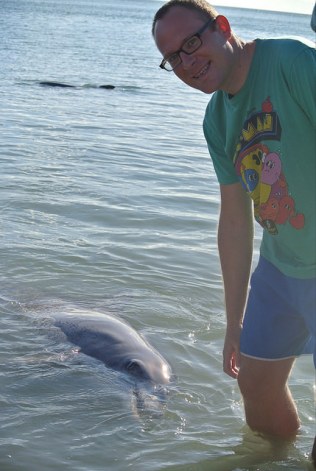 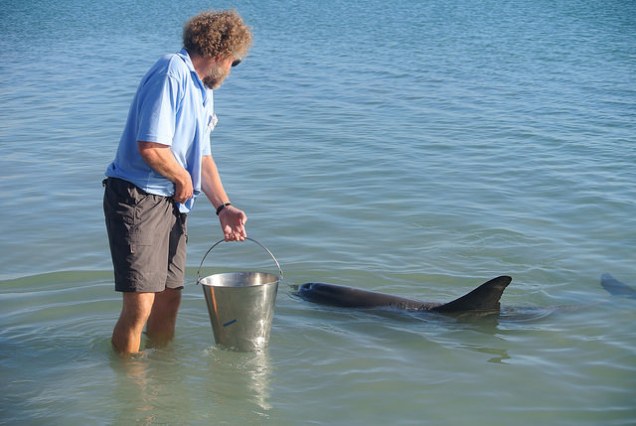 With the Dolphins fed it was time for our breakfast of Cereal and Toast. Unlike Neil in the Inbetweeners 2 Movie, this would be for us and not the Dolphin!

Just then a pair of eyes came his way and the finger of destiny at him, before a very posh voice proclaimed..”You in the green t-shirt. Yes you, you have been chosen”

On our way back down the Shark Bay peninsula we stopped off at a great viewpoint called Eagle Bluff. Here we had another close encounter with a lizard and saw an amazing vista. We could just about make out some baby sharks on the water but they were too quick for the Nikon J1 to pick up.

At this point we would have one more stop before the group split. 7 people were only doing the 3 Nights Tour and had to go back to Perth (via Kalbarri). Heading North was the remaining Famous Five (John, Karen, Ingmar “Dutchy”,Fenny and Shiren) and Tom. The last stop before this split was to be the world famous Stromatolites at Hamelin Bay.

Stromatolites are regarded to be the oldest living things on the planet. To the untrained eye they look like rocks. Due to Hamelin Bays unique geography the stromatolites here have been allowed to grow out of control. Each year they reach their full 0.3mm a year. That’s impressive when you see that the older examples here are over a metre high.

While not impressive looking at first sight, doing basic research after the event has led us be fascinated with these things.

After saying goodbye to the other half of the group, we headed up to our next destination Coral Bay.

On the way we stopped off at a signpost signifying we were crossing the Tropic of Capricorn (Johns sign). 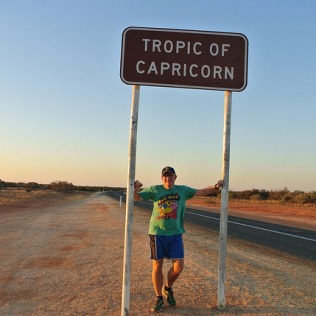