There’s two type of horses. The quick… and the hungry!

The Kalbarri National Park was massive. With gorges carved out by the Murchison River and red and white striped sandstone features the park reminded Karen of the Grand Canyon in the US. 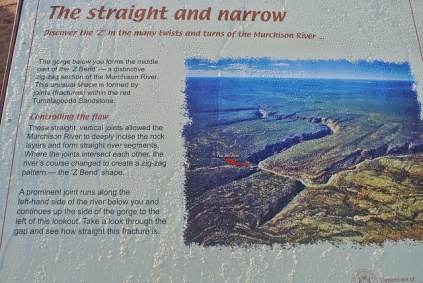 We trekked for about an hour to reach some of the key areas of the park, The loop, Z-Bend and our favourite Nature’s window. It was a good thing Tom was with us as he had to deal with some snakes on our path. He also pointed out a very interesting type of spider – Australian Jewel Spider or Christmas Spider. The designs on their backs look like a skull and crossbones.

The scenery was absolutely breathtaking and we got some great photos here. During the trek there was an optional activity of Abseiling. Karen and I were holding back our activity money for Coral Bay snorkelling so we volunteered to take photos of some of the others doing it, or so John thought. As the only other strong man on the tour, after Tom, he was needed to act as a counterweight to the abseiler at the bottom.

One guy on out tour, Ingmar from The Netherlands was about 6ft 7in tall so he looked hilarious coming down the mountainside. It was like Spiderman. His height became a running joke after that and in fairness to him he took it very well.

We got some group shots down by the Murchison Riverside. The first time I have seen anyone with 13 cameras hanging off their arms.

Next on the trip was a chance to cool off at Shell Beach. On the way to the beach we passed a huge fence. This was put up as part of a ground-breaking wildlife re-introduction programme, called Project Eden. The goal is to remove all feral animals from the peninsula and then re-introduce native wildlife such as the Malleefowl, Bilby and Quenda (Brown Bandicoots). This has largely been successful to date except for the Cats – they keep getting in. To counter this all along the fencing are mini-speakers that play one sound on continuous loop. 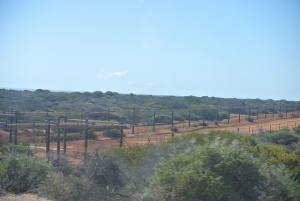 Can you guess the sound? (Answer at end of post)

This hypersalinated bay is situated in Shark Bay, a peninsula to the north. The Water is so full of salt that you can float with zero difficulty. The waters were also teeming with wildlife as dozens of crabs tried to bite our feet and Tom spent the afternoon chasing small sharks in the shallow waters.

The beach gets it’s name from the content of it’s floors. It’s entirely made of shells. 4000 years of shell (cockle) deposits has created this wonderful place.

Shark Bay is a UNESCO Heritage Site for it’s unique ecosystem. Part of the appeal would be the place we would staying that night. The Dolphin Feeding centre at Monkey Mia.

We had cheap beers available, a full BBQ with really good steaks and the chance to see Dolphins in the morning. Tom filled us in on what would happen. A couple of dolphins would show up and then if you were lucky you would be picked from the crowd to feed one of them. Tom suggested bright clothing and or wide smiles. As everyone else tucked into their steak, John’s mind started to work overtime on a plan!

Answer: The sound was that of a dog barking! Yep you heard me. Real science in operation here folks!