On our first full day in Vientiane we decided to visit a sight of a different nature. Not a Temple, Palace or Museum but one of the best Visitor Centers we have been in quite a while.

Cooperative Orthotic and Prosthetic Enterprise, otherwise known as COPE, is a locally run non-profit organisation working with the Center of Medical Rehabilitation (CMR), Lao Ministry of Health and four provincial rehabilitation centres in an innovative partnership to provide comprehensive rehabilitation services for Unexploded Ordnance (UXO) survivors and other people with disabilities across Lao PDR.

But why is this such a problem in Laos?

From 1964 to 1973, the U.S. dropped more than two million tons of ordnance on Laos during 580,000 bombing missions—equal to a planeload of bombs every 8 minutes, 24-hours a day, for 9 years – making Laos the most heavily bombed country per capita in history. The bombings were part of the U.S. Secret War in Laos to support the Royal Lao Government against the Pathet Lao and to interdict traffic along the Ho Chi Minh Trail. The bombings destroyed many villages and displaced hundreds of thousands of Lao civilians during the nine-year period. 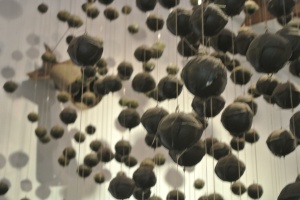 Up to a third of the bombs dropped did not explode, leaving Laos contaminated with vast quantities of unexploded ordnance (UXO). Over 20,000 people have been killed or injured by UXO in Laos since the bombing ceased. The wounds of war are not only felt in Laos. When the Americans withdrew from Laos in 1973, hundreds of thousands of refugees fled the country, and many of them ultimately resettled in the United States.

Here are some other startling facts about the U.S. bombing of Laos and its tragic aftermath:
Over 270 million cluster bombs were dropped on Laos during the Vietnam War (210 million more bombs than were dropped on Iraq in 1991, 1998 and 2006 combined); up to 80 million did not detonate.

Nearly 40 years on, less than 1% of these munitions have been destroyed.More than half of all confirmed cluster munitions casualties in the world have occurred in Laos.
Each year there continue to be over 100 new casualties in Laos. Close to 60% of the accidents result in death, and 40% of the victims are children.
Between 1995 and 2013, the U.S. contributed on average $3.2M per year for UXO clearance in Laos; the U.S. spent $13.3M per day (in 2013 dollars) for nine years bombing Laos.
The U.S. spent as much in three days bombing Laos ($51M, in 2010 dollars) than it spent for clean up over 16 years ($51M).

The Visitor Centre showed the human stories behind those facts using videos, BBC World Service podcasts, photos and candid interviews with victims and their families. What struck us was how people are still being injured or killed today! The main risks are due to Laos people trying to collect the scrap metal from these UXO in order to top-up their woeful $1 a day average wage (One of the lowest in the world). By risking their lives they can get $4 per kilo.

But it is not all a sad story. Thanks to global awareness and help thousands of maimed Laotians are able to live better lives thanks to new prosthetic limbs and the physiotherapy to use them. Many of these same victims were also influential in getting the United Nations to pass a resolution for a Global Ban on Cluster Munitions in 2008. We are both proud that our countries are party to this.

There was also a nice cafe on site as well as bicycles to borrow for the day.

If you would like to know more here is a link http://www.copelaos.org