We had an evening flight booked to Hanoi so the hotel kindly let us leave our bags and this allowed us to take a trip out of Hue, South to see the Tombs of the Emperors.

As Hue was the Imperial Capital of Vietnam from 1802 until 1945, the rulers of the Nguyen Dynasty were buried in elaborate tombs outside the city. As they were reduced to puppets under the French their tombs became more elaborate as they had little else to plan for.

As it was a scorching hot day we opted to do just two of the temples (also our combo-ticket only covered those two)!

The first Tomb we went to was the Tomb of Minh Mang. Considered the best of the bunch, it is situated inside a wall and covers several hectares filled with woodland and water make it a very relaxing place to be- if not a cool map to build for Halo. 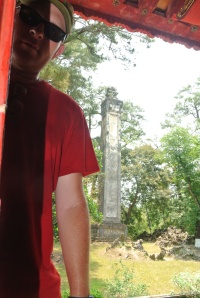 Can you build this in Lego?

The main buildings are arranged on an east-west axis, including a courtyard surrounded by stone warriors on each side, and several temples and pavilions. You cross some bridges over two lakes before the axis ends before the vast burial mound which is located behind a high wall with a locked doorway. 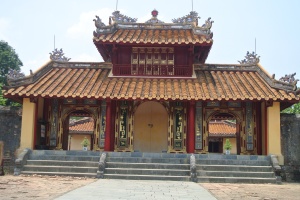 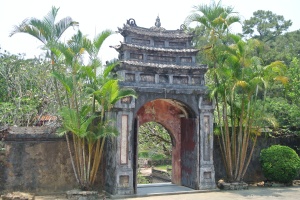 Once a year, the doorway is opened and a special ceremony is held to commemorate Emperor Minh Mang’s birthday.

It must be noted that the best toilet in Asia is located here!

From here we headed back to the Tomb of Khai Dinh which dates from 1925, and as such is the best preserved of all the Tombs. The exterior is covered in blackened concrete giving it a Gothic style.

It is a mixture of Asian style and European Motifs with the classic forecourts leading up to the tomb. The key difference is that unlike Minh Mang’s tomb which was laterally laid out, you have to climb up this tomb.

The first level contains more stone warrior set up like a human game of chess. The tomb itself is completely over the top with incredibly detailed and opulent mosaics of cavorting dragons.

We 8strike forth but not back…to protect our King from the foes attack!

In the main tomb there are no photos allowed. Here are some photographes interdite. 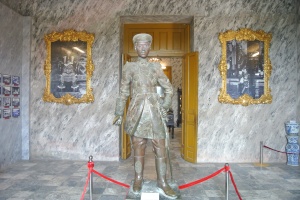 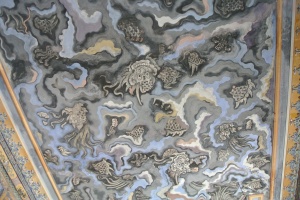 We were extremely lucky here as we were one of only two other small groups looking around. The bus masses only arrived as we were exiting the tombs.