In a rich man’s world.

An apt title for this post as Mui Ne is covered in high end resorts and fancy sailing clubs – most of them Russian owned. We managed to find a great little hotel however, called Xin Chao that even had a pool for $22 a night (including breakfast).

But we had to get there first.

Seats A12 and A13 were booked on the sleeper bus. We are not sure why it is called a sleeper bus as the only way you can sleep on it is if you are under 5’2″ and are paralysed from the waist down. It is hard with bends and grooves in all the wrong places and you feel like you are in a toboggan.

Karen even managed to get herself set on by a cockroach while she was asleep! 6 hours never felt so long. Good thing we had this test run instead of doing all night!

Mui Ne is a 15km strip of beach that has been vastly overdeveloped, but it does have its charms so we decided to do a group tour the next day. With that booked we set out to explore the area on foot. 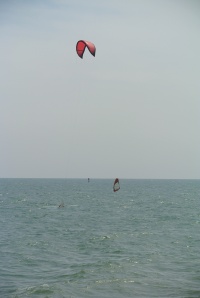 Karen spotted a load of locals eating in a non-descript restaurant by the sea, so we ventured in and had some amazing noodle soup that would have filled us had some of it not blown into Karen’s face with the wind. The winds get so strong here that it is a popular destination for windsurfing.

Walking further along towards the fishing village we came across all the seafood restaurants setting up for the night and got up close with some live fish.

The first evening we chilled by the pool and had dinner locally.

We were collected the next day by a silver jeep and brought us to the start of our tour.

First up was the Fairy Stream (Suoi Tien). This is a little river you can walk through that winds around bamboo forests,boulders and sand dunes. 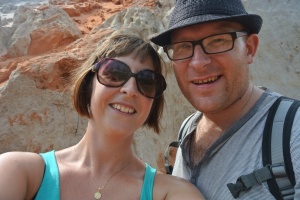 While we were walking in the stream a young Vietnamese boy was shouting to us in Russian. He was trying to offer us Ostrich Rides. Mui Ne is another mini-Russia so the locals all speak Russian.

We then took in the fishing harbour before the long drive to the White Dunes. This park of odd Sand Dunes stands in stark contrast to the deep blue of the nearby Lotus Lake. This the driest area in all of South East Asia and has allowed the dunes to form.

Catch of the day!

…when the boats come in! 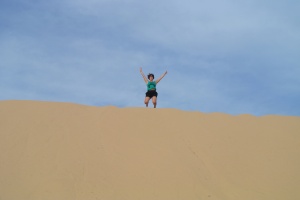 Reach for the stars!

Sand people travel in single file to conceal their numbers! 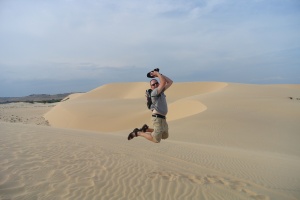 The sand was very hot!

On the way back we went to the Red Sand Dunes near Mui Ne village. Here we took in sunset and John attempting a jump picture fell down the side of a dune.

Sunset in the desert!

After washing all the red sand off, we headed to a local bar for Live Music which was a welcome change to the local music and Russian techno we had in Saigon. While we were getting some more bug-spray on the way back, John spotted some cobra wine (yuk!)

Tomorrow we would be heading up into the mountains…