After a much needed lie in we set off on foot to the Grand Palace. After 10 minutes we wish we had got a TukTuk as it was hot hot! But no. We are travellers and not tourists so we continued á pied (as the French say). 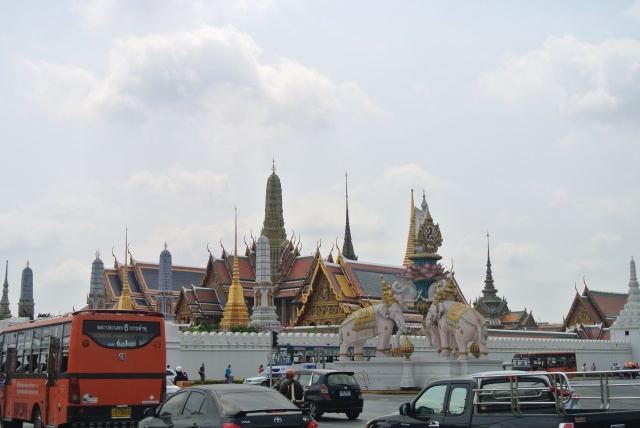 We eventually made it to the walls of the Palace and worked out which gate to enter as it has more gates than a tinker’s cart!

It was at this point in our story that along came a spider in the form of a scam artist.

The Palace is not open today. Come, I bring you to floating market instead?

But we are not tourists as I said, and having fallen for this trick back in 2007, John was determined to get to see the Palace this time! Also there is now a loudspeaker message playing on loop saying that everyone outside the Palace is bogus, so we were going to be ok this time.

After putting back on his removable trouser legs, John rocked up to the ticket counter. It appears Thailand has braced inflation as it is now 500 Baht (£10) to gain entry and they had not disguised this fact as the price on the board was a sticker over the old price.

Karen wasn’t too happy about this as it was her 3rd time in the Palace.

The Grand Palace, or Phra Borom Maha Ratcha Wang, is a complex of buildings that has been the official residence of the kings of Siam since 1782. It also contains the Temple of the Emerald Buddha and a scaled massive model of Angkor Wat. 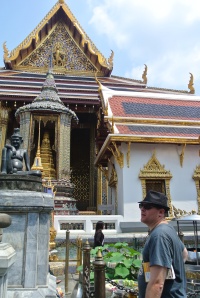 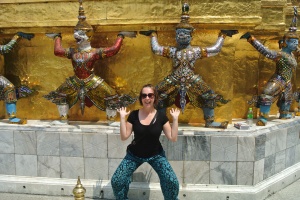 Odd one out competition 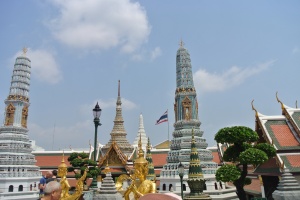 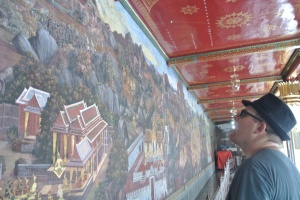 The variety of buildings and the vast array of colours was mind bottling. So many statues and murals to keep you busy. It was during our visit that we met our first real life Asian Poser ( We would meet many more!). 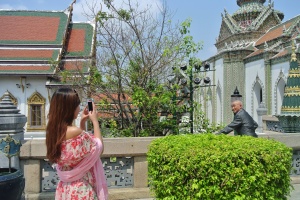 In 30 degree heat he was wearing one of those shiny Michael Bublé suits and walking around getting everyone to take his picture. Karen and I were even obliged to help him out at one point.

Our visit was shortened by the fact that the Emerald Buddha Temple was closed at the weekend but it was ok as this was Karen’s 3rd Time visiting so she just described it to John. We managed to time it for the changing of the guards ceremony too. 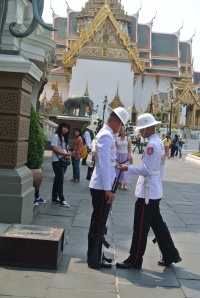 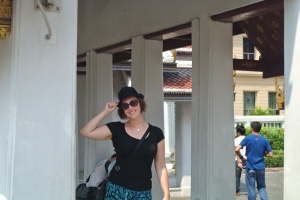 There was an impressive array of cannons at one point (over 120 of various make) and impressive models of the Palace through the ages all guarded by members of the 1st Infantry Regiment (King’s Own Bodyguard). 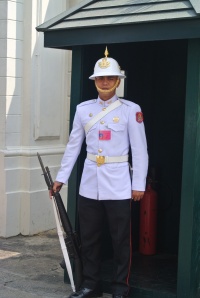 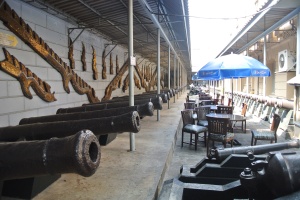 Give them a broadside!

Our next destination was next door, the big Buddhist Temple complex of Wat Pho. The Temple contains over 1000 Buddha Images and is considered the first public university in all of Thailand, teaching religion, science and literature through its murals and sculptures.

The entry ticket included a bottle of water each, which Karen sought out while John took some photos of the Kneeling Buddha Statue, as it was, you guessed it, her 3rd time visiting Wat Pho. 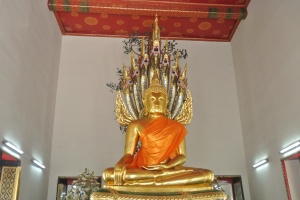 That said she was still more than impressed with the big Buddha there. Over 160 ft long this Reclining Buddha was huge!!! The pictures below barely capture the size. 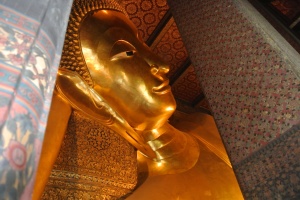 “Gold… Always believe in your soul” 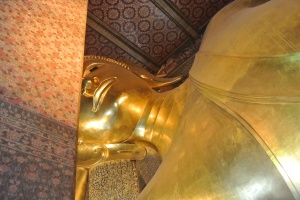 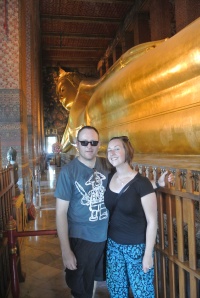 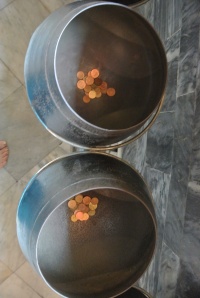 Offerings to the gods.

With the weather cooling we walked back to the hotel and then headed out to dinner. We ate at a local restaurant that served ‘Splite’ instead of ‘Sprite’ and some top quality food for bottom drawer prices. Added to this was our crazy waiter who worked really hard for his tip. We didn’t meet Mr Chow (The Hangover) but this guy came close. 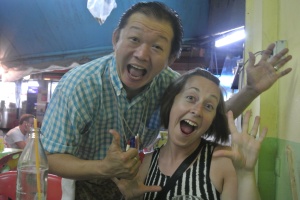 Europe via DohaSeptember 12, 2021
Join 335 other subscribers