Into the Delhi of the beast… 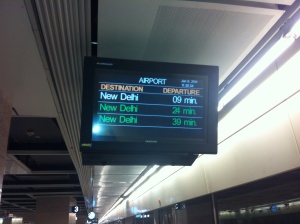 Onboard are two highly trained operatives on a mission…Objective 1: Survive Delhi!

First stop was New Delhi Train Station in the heart of the city. We took the Airport Metro Express (150 Rupees each) and it took 25 mins.

We we didn’t realise how big the station was or how many exits there were. We wandered for a bit until finally some local knowledge pointed us in the right direction.

We we arrived to our hotel , the Bloom Rooms, and after some quick unpacking headed into Old Delhi and it’s warren of markets and shops. Before that however we had our introduction to the  phenomenon of ‘Delhi Traffic’ from the back of an auto-rickshaw/Tuktuk ! (More on this topic later on)

Old Delhi (or Purana Dilli) is a walled city (within a city) that was founded by the Mughal Emperor Shah Jahan in 1638. He moved the Mughal Capital from it’s previous home of Agra to here in 1648 and it remained as such until 1857 when the British Raj rose to power. While its lustre has waned with the years since it sill serves as the symbolic heart of Delhi.

We got off the Tuktuk and after a few photos outside the Red Fort ( it is closed on Mondays) we headed down then cacophonous streets of Chandni Chowk. This was a shame as being the home of the Mughal Emperors it looked quite impressive from the outside and contained many museums within. 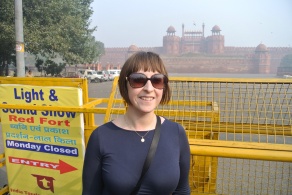 Chandni Chowk (Moonlight Square) sandwiched between the Red Fort and the Old Delhi Railway Station was the definition of ‘heaving’. There were so many people on the streets that at one point we took shelter in a McDonald’s just to compose ourselves with the volume of people – and to get some water! (On a side note we had our first political debate in here with a local who in between scoffs of a hamburger asked probing questions about the upcoming Scottish Independence Referendum. He was against it). 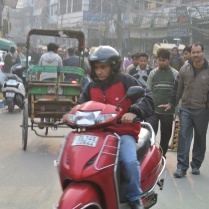 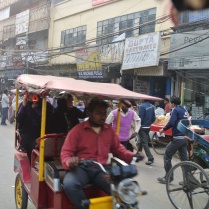 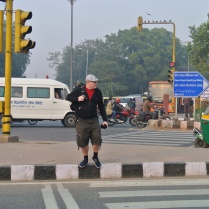 After a few hours meandering the busy market streets we headed to the more relaxed Connaught Place via manual rickshaw (some old fella huffing and puffing as he carried us) towards a slightly newer part of the city.

Originally the administrative buildings of the British in India, Connaught place is now home to vast swathes of Western Capitalism and advertising. Amidst the shops and salons there was a small tourist office and it is here that our day trip to Agra was negotiated, money changed hands and a plan slowly formed. 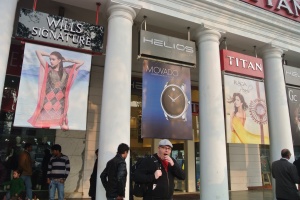 Next stop  Agra and the Taj Mahal!